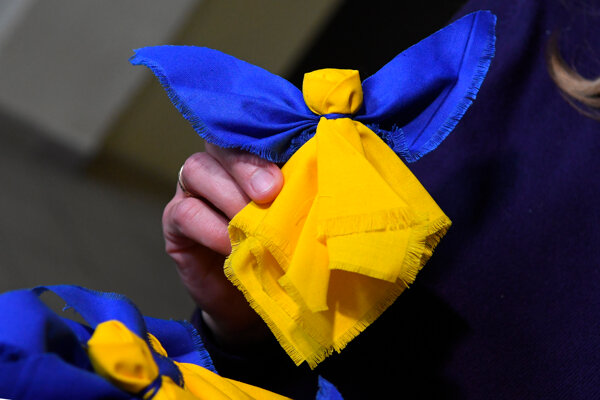 Art and crafts lessons,are among their favourite because there is no language barrier and they can fit in better. (Source: TASR)
Font size:A-|A+  Comments disabled

Anastasiia Kasian is a native of Poltava and had lived in Kyiv for 15 years before she fled Ukraine following the Russian invasion. A psychiatrist and landscape designer by education and a journalist by profession, she now lives in Bratislava with her 11-year-old daughter, 8-year-old son, a cat and a dog.

When the war started, there was only one thought on my mind: I need to hide the children as far away from it as possible. I had no plan. I just put my children in the car and drove off. When we crossed the border with Poland, we stopped in the middle of a field and just stood there, with no idea what to do next. I wrote and called my acquaintances one by one, asking for contacts in Europe to help me find a place to stay.

After the first few days staying with wonderful hosts in Poland, my brother's friend offered me and my children his apartment in Bratislava. That is how we ended up here. By coincidence.

Our first month in Bratislava I was just waiting for the war to be over and for us to go home. It was still hard to believe that there was an actual war, and nobody believed it would last long anyway.

But March passed, and there was nothing to suggest that we would be returning home anytime soon. I decided that it was time to send the children to a Slovak school, seeing as they were bored within the four walls of someone else's apartment. They seemed to be about to turn into little Mowglies. So I googled the nearest school, contacted its headmaster and just like that, my children became pupils of a Slovak school.