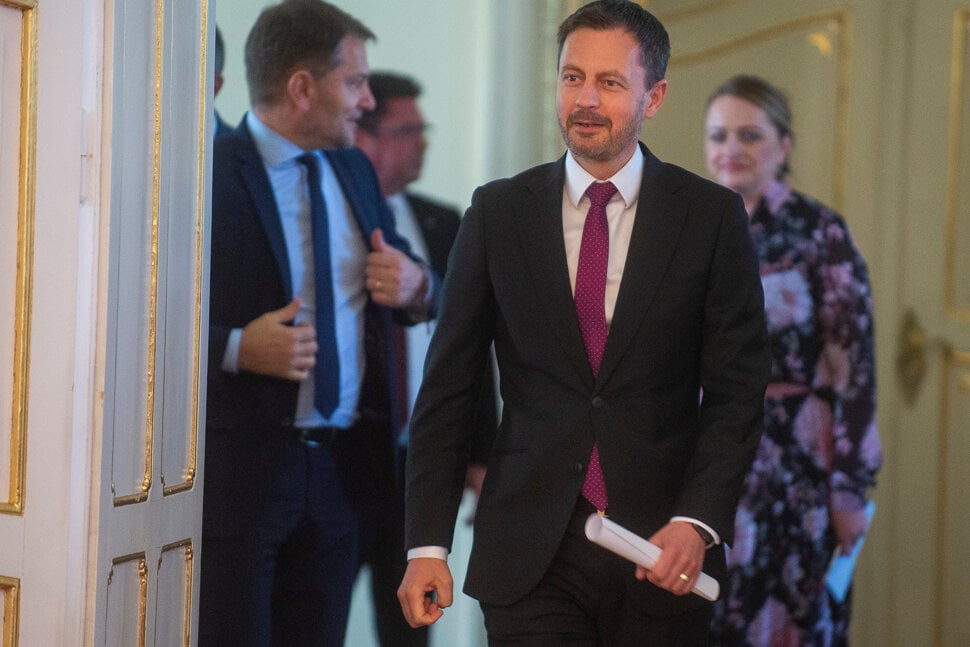 PM Eduard Heger (OĽaNO) is about to announce a salary increase for people working in the education sector on July 13, 2022, in Bratislava. (Source: TASR)
Font size:A-|A+  Comments disabled

For weeks now, Prime Minister Eduard Heger has resisted a demand to sack his least popular minister. But his decision to preserve his party’s unity might soon cost his government its parliamentary majority.

The demand to remove Finance Minister Igor Matovič, who heads the largest coalition party, Ordinary People and Independent Personalities (OĽaNO) was issued by another coalition member, Freedom and Solidarity (SaS), at the start of the summer. At the same time, SaS announced that it would no longer accept the current coalition agreement.

The prime minister, who calls the SaS demand “unrealistic” and accuses the party of attempting to bring his government down, is a member of OĽaNO, meaning Matovič is his party boss.

“This is, in my opinion, party egoism,” Heger said in mid summer about the SaS demand and its corresponding threat to leave the government if the finance minister is not dismissed.

Heger’s government has expressed strong support for Ukraine in different ways, led Slovakia out of the coronavirus pandemic, gained a strategic Volvo investment, encouraged the investigation of high-profile corruption and organised crime cases to begin, and adopted an EU-backed recovery plan.

If Heger, a respected man among European leaders, fails to secure a parliamentary majority from September, his teetering government could put a number of planned reforms within the recovery plan and billions of euros in the EU’s recovery fund at risk, among other things.

The current coalition crisis, which can be considered the second major clash in just over two years (the first ended with Matovič stepping down as prime minister in spring 2021), erupted in May after parliament refused to permit the arrest of Smer MP and former prime minister Robert Fico when he was charged with criminal conspiracy by police. It reached its peak after parliament overrode a presidential veto to approve Matovič’s so-called family package of economic measures, worth more than €1 billion, only by turning to far-right lawmakers for support.

SaS, which could have vetoed the package by voting against it but instead agreed merely to refrain from voting for it, wants to oust the finance minister because of what it claims is his mismanagement of the public finances, and for his constant verbal attacks on SaS and its leader, Economy Minister Richard Sulík.

“It’s a long-term conflict,” explained political scientist Grigorij Mesežnikov of the Institute for Public Affairs, “which is fuelled mainly by Matovič’s personal characteristics.”

Last year Matovič was willing to resign as Slovakia’s prime minister only after some of his coalition partners had agreed to his several conditions, one of which included the stepping down of Economy Minister Richard Sulík.