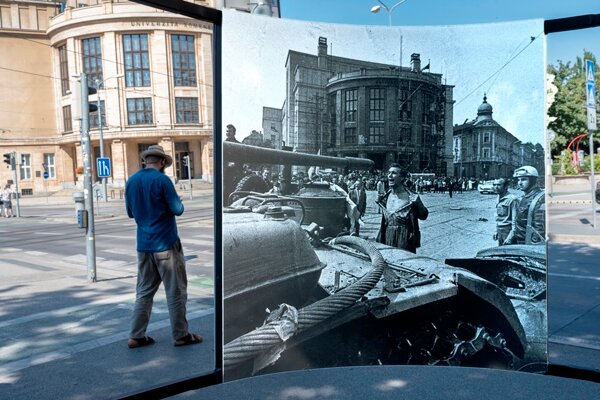 The photo Bare-chested Man in Front of the Occupier’s Tank is exhibited almost at the same place as where it was taken. (Source: TASR)
Font size:A-|A+  Comments disabled

The summer of 1968 was carefree and filled with hope in Czechoslovakia. For photojournalist Ladislav Bielik and journalist Alica Malá, it was also the summer of their wedding: they got married on August 17. Only three days later, the newlyweds woke up to the roar of tanks, like millions of their compatriots, to learn that their country had been invaded overnight by Soviet-led Warsaw Pact troops to crush the brief period of liberalisation in the communist country.

“My father used to bitterly say that the entire Warsaw Pact came to congratulate them on their wedding,” said Peter Bielik, the younger son of Ladislav Bielik, the author of the iconic photograph The Bare-chested Man in Front of the Occupier’s Tank, at the opening of the exhibition August 68, Three Days Before the Invasion.

August 68, Three Days Before the Invasion

-the exhibition takes places at Šafárikovo Square, SNP Square, Primaciálne Square and in front of the Blue Church, reflecting places where the pictures were taken. It will last until September 17

The exhibition features 12 panels scattered around Bratislava's Old Town with photographs a 29-year Bielik took during the first days of the invasion, contrasted against the wedding pictures taken by his friend and fellow photographer Michal Borský.

“We wanted to show the contrast between August 17 and August 21,” said Bielik.