Boroughs are seeking solutions for unattended vineyards and fields. 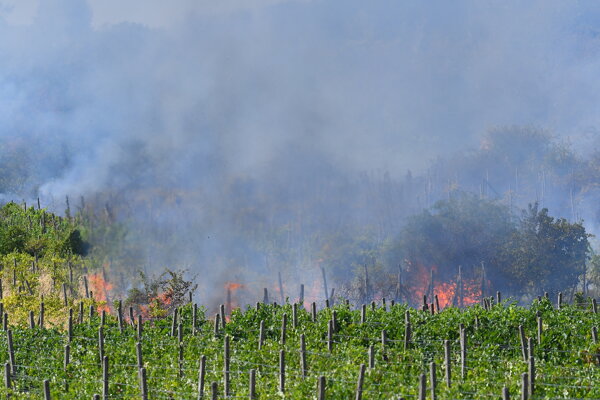 Firefighters in Bratislava Region were called out six times on Tuesday, August 16, to battle extensive fires, five of which broke out in the capital city’s boroughs of Rača and Nové Mesto, while another flared up in the vicinity of Modra, a nearby wine town.

A fire on Odborárska Street in Bratislava engulfed a railway track and caused a shutdown of rail traffic, while a blaze on Račianska Street threatened a horse farm, with several individuals evacuated.

“The flames reached a height of five metres there,” the Bratislava Firefighter and Emergency Corps Directorate reported via social networks.

More than 80 professional and voluntary firefighters from Bratislava and Trnava Regions were deployed. No injuries were reported. The cause of the fires is under investigation and foul play has not yet been ruled out, according to the directorate.

In the town of Modra vineyards and dry shrubbery were ablaze, with strong winds and relatively inaccessible terrain posing an additional challenge. An Interior Ministry helicopter equipped with a water-filled, collapsible 'Bambi Bucket' was summoned to aid firefighter crews, and the fire was successfully put out shortly after midnight.

Ivan Vrana, the chairman of the civic association Terroir Rača, said that it was not yet possible to estimate how much of the wine harvest was destroyed.

“Some have had their crop destroyed marginally from the neighbouring neglected vineyards, and some are significantly worse off,” Vrana told the TASR newswire.

The family winemaker Vinárstvo Hulanský lost about 10 percent of its grape harvest. They hope that the vines will survive, which would mean that there could still be a harvest from them next year. However, if the flames completely burned them, the damage will be much higher, the Denník N daily wrote.

The Bratislava boroughs, together with the state, want to find a solution to mitigate fire danger in areas outside residential zones. This would mainly concern the maintenance of uncultivated vineyards and fields. City boroughs have no authority in this regard, but they would like to change that, the mayor of the borough of Rača, Michal Drotován, said on social media in connection with the vineyard fires.

“We have communicated with the city council, and the mayors of the Nové Mesto and Vajnory boroughs, so that a city-wide meeting with the state and the Bratislava District Office can be convened, in order to find a solution for how to prevent fires in urban areas as much as possible in the future,” Drotován wrote.

Drotován has promised that his office will try to help the affected winegrowers whose crops were burned.

“People can support the winegrowers and winemakers from Rača by buying their products,” he wrote, adding that they could do so during the upcoming wine harvest festival (vinobranie), which is scheduled to take place in Rača between September 9 and 11.