How the wine from a now-controversial winery was served to Queen Elizabeth II.

When she visited Slovakia in 2008, she was served the same wine that was served at her own wedding. 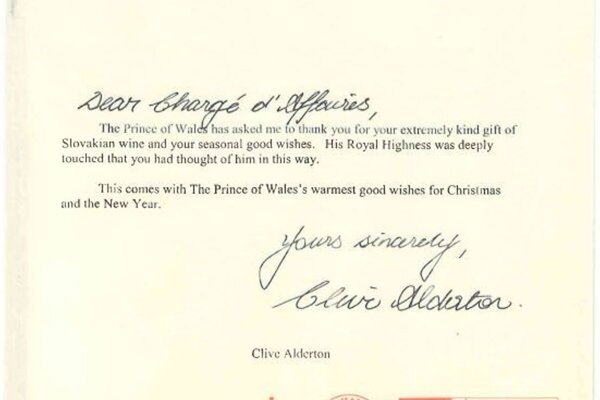 A letter of thanks from the chamberlain of today's King Charles III for wine from the Vinesa winery. (Source: Sme archive)
Font size:A-|A+  Comments disabled

In 2008, the British royal family wanted to develop relations with the fast-growing countries of the former Soviet bloc. They chose Slovakia and Slovenia for a royal visit.

In October 2008, Queen Elizabeth II. paid her first and only official visit to Slovakia. She was hosted here by the then president Ivan Gašparovič. Her visit showed that Slovakia had not yet grown into its role as a country to host such an event. At that time, the state had no more suitable accommodation for her than the government hotel Bôrik, and Robert Fico from Smer, the prime minister at the time, did not come to the banquet despite being invited.

There was one more interesting name at the Queen's visit, which was unknown to the public at the time. During the banquet, wine was served from Pivnica Radošina. One year before the Queen's visit, the now infamous Norbert Bödör became the proprietor of the company. He is currently being prosecuted for being part of what the police describe as a criminal group that illegally controlled the police.

The President's Office selected the wine together with the catering company Sharkam, which prepared the dinner for the banquet in Reduta, recalls Marek Trubač, the president's spokesman at the time, himself a trained winemaker.

"We recommended it with regard to its history, as it was also served at the Queen's wedding in 1947. This is how the wine was introduced to Queen Elizabeth herself," said Trubač.

Yet, questions still surround the story about Slovak wine at the royal wedding.

Different versions of the story