EU Commissioner: There are EU funds to help Roma, but why aren't they used in Slovakia? 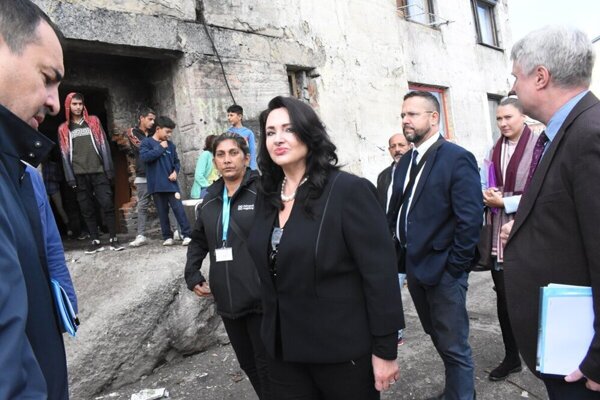 About 1,700 Roma people live in the Habeš settlement in Sečovce, Košice region. Locals have access to two taps of drinkable water for the whole community. The settlement is drowning in junk, mud, rat infestation and terrible living conditions.

EU Commissioner for Equality, Helena Dalli, witnessed the living conditions of the settlement during her visit on September 21, 2022. The EU commissioner met with locals, as well as with Member of the European Parliament Peter Pollák, the Slovak government's plenipotentiary for Roma communities Ján Hero, and Sečovce Mayor Dominik Frajko, the Korzár daily reported.

“European Union sources are not manifesting themselves into the everyday lives of Roma people. There is nowhere near enough political will to challenge the living situation and change it for the better,” commented Pollák.

The children living in such conditions do not have a bright outlook for the future; hundreds of people don't have access to basic necessities, which needs to change said Pollák, who is an MEP for the ruling OĽaNO party.

"There are means to solve the situation of the Roma. The question is why they aren't being used," Dalli said as quoted by Korzár. She concluded that municipalities are negligent in using money from EU funds.

The situation of the children living in the settlement is especially alarming, said Dalli. There is no equality if proper care and housing is lacking, she added.

The overall situation of Roma communities was recently criticised by the European Parliament Committee, during the July visit of another settlement, in Petrovce nad Laborcom. The committee chairman described the situation as scandalous and said that locals are living in medieval conditions.

The cooperation of municipalities is crucial in this step, said plenipotentiary Hero: “The change needs to spring from local levels.”

Pollák complained that the municipal authorities do not cooperate enough. Though the EU has been investing funds in bettering the lives of Roma people for 14 years, municipalities are struggling to properly support the communities, he charged. The MEP believes the municipalities would be better motivated to help their Roma communities if they were allowed to use EU funds without the need to contribute their own resources.

Water and schooling among main issues

The head of the local Roma community, Jozef Kudráč, described living in the settlement as unsuitable. There are two water taps and people have few options to wash themselves. This worsens the chances of Roma people finding a job.

Water in the settlement is an issue because many of the houses and shacks are illegally built, so water, waste and garbage management are impossible.

Even though there is a school in the community, not many children from the Roma community attend. Commissioner Dalli also noted that Roma children are often expected to attend segregated schools, which widens differences and diminishes the opportunities to live a normal life.

“Children need to practice what they’ve learnt during school at home – hygiene included. If children do not have the opportunity to clean themselves, it’s a never-ending cycle,” Secovce Mayor Frajkor said as quoted by Korzar.