Automotive business is not lucrative, but e-mobility is promising 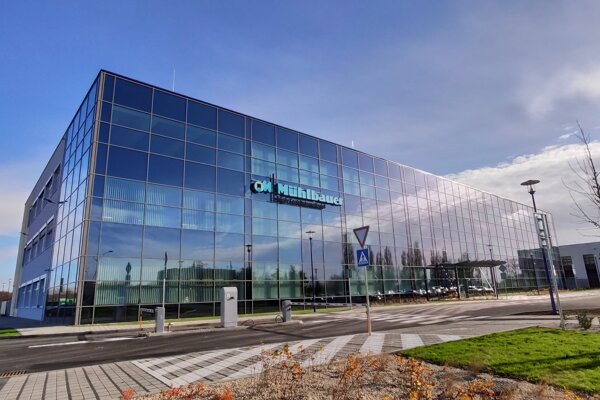 A pile of white sheets lays on a table on the second floor of the Mühlbauer Automation building in Nitra. These are disposable heated blankets for which the company is developing production line technology. All through the process, the company closely communicates with the client, not only about how to produce the blankets but also about their final design, with the goal of making their production as cost-effective as possible.

Though the medical sector is not the prime focus of the Nitra-based Slovak arm of the German company Mühlbauer, the heated blankets make a good example of how the company works.

“We are the integrator of technologies for tailor-made machines that can manufacture products based on the client’s requirements,” said Michal Adamik, head of R&D at Mühlbauer Automation, in an interview with The Slovak Spectator. At the end of the day, the kind of product that will roll off the production line does not play a decisive role.

The heated blanket project will be commissioned by their client, for which they have developed a battery management system production technology for hybrid and electric cars. Even though these two products are from two very different sectors – automotive and medical – the production processes are similar and offer many synergies.

The Mühlbauer Group, which since 1981 has grown into a one-stop-shop technology partner for the smart card, ePassport, radio-frequency identification (RFID), semiconductt and eMobility industry, operates two units in Nitra: Mühlbauer Automation and Mühlbauer Technologies.

The history of the Nitra-based arm of the German company goes back to 2005, when the parent company wanted to expand into the east of Europe. They selected a possible locality in each of the four Visegrad Group countries (Slovakia, Czechia, Poland and Hungary). In Slovakia, the company selected Nitra after one of its clients, Giesecke+Devrient, found good conditions for expansion.

Finally, Josef Mühlbauer, the founder of the company and current CEO of Mühlbauer Holding AG, made the final decision and chose Nitra in 2007, recalled Ladislav Paškrta, general manager of the Mühlbauer Group in Slovakia .

“He did it based on his feeling as a businessman, rather than an excel chart,” Paškrta told The Slovak Spectator.

While there was not much difference between potential destinations in terms of state support, Nitra stood out with its range of secondary technical schools and universities.

“The availability of the labour force and good conditions for raising future workers, also via dual education, was a condition that Nitra fully met, and which spoke for this locality,” said Paškrta. He adds that Nitra is also well connected to the highway network and about five hours of driving from their headquarters in the German city of Roding.

The company settled in a rented property at first, and later built their own greenfield premises. Today they consist of two production halls, the second one opening last May. The total costs for the secondhall’s construction exceeded €12 million. The company received investment aid in the amount of €3 million from the state. During the ribbon-cutting ceremony, then economy minister Richard Sulík said that it was the right step for the state. “The share of research and development in this company is really substantial,” he said.

Slovakia is not their prime market as most of their clients are abroad, including such companies as Apple and Tesla. Sulík noted during the opening that there was no country in the world that wouldn’t use the products of the Mühlbauer Group. Paškrta confirms that their products and activities are behind the production of 80-90 percent of items and devices with which people interact daily – a simple chip within any electronics, for example, was most likely checked for quality by a system developed by Mühlbauer.

“To produce one card, you need up to 20-30 various machines, starting with production of the basic material, its cutting, assembly of the chip, personalization of the card and so on,” explained Paškrta.

While they develop the entire production technology, their aim is to make the production as automated as possible. Thus, clients return and ask for the upgrade and innovation of their technologies. This is also the case of a machine that transfers holograms from carrier tapes to a carrier substrate, a technology used, for example, in the production of ID cards or driving license cards.

“This was one of the first full-fledged machines developed and built in Nitra,” said Adamik, adding that they worked on the machine since 2017 and supplied it to the client in 2019. “At the moment we are working on the third, upgraded variant.”

The latest trend they joined is new energy, which includes things like batteries for hybrid and electric cars, hydrogen fuel cells, and flexible foils for the photovoltaic industry.

“We are working on the development and production of lines to manufacture a component, which manages communication between a hybrid car and its battery in order to use the battery effectively during its life span and to last as long as possible,” explained Paškrta. The management of car batteries will impact the shape of the battery, as well as the car, its weight, and eventually its price.

“It’s not lucrative at the moment, because the requirements and stress within [the sector] are high,” he said. This is mainly because subcontractors feel pressure to keep the final price of the cars as low as possible.

Mostly it’s the client who approaches them with an assignment to develop and tailor-made production technology for a product to be produced in series. This often happens while the client is still working on the final design. Mühlbauer is thus able to propose alterations in this design, effectuating the production process. First, they look at the technologies they already own and then at what they need to develop.

“If someone comes tomorrow and says that they need to make something for a space rocket, we will say of course, yes we can,” said Paškrta while citing a favourite slogan of Josef Mühlbauer.

“We are more or less self-sufficient in terms of component production,” said Stanislava Gajdošová of Mühlbauer Technologies.

This makes them independent on suppliers, the company not having embarked on production outsourcing.

As Paškrta noted, 95 percent of their production technologies are new machines.

“Within the entire Mühlbauer Group, Nitra currently not only has the most modern machine park in terms of age, but also know how,” said Paškrta. He adds that Nitra serves as a pilot in this regard. They are testing new machines and if it all works out, then subsequently other members of the group will implement them.

The labour force in Nitra numbers approximately 500 people in the two units, those working in R&D and assembling prototypes accounting for about 130 people. Paškrta highlights that all its employees need to have high qualification given the company’s innovative production portfolio.

“This scheme has proven to be good as people do not need work overtime, can plan their private life well and save on commuting,” said Paškrta. “Even when the number of orders decreased and we wanted to return to standard eight-hour shifts, our employees were against it.”

This scheme, however, will not work for R&D people.

“You can’t tell an employee in R&D to think faster or be creative faster; that person simply needs a calm environment and to remain concentrated to perform the job,” said Paškrta. “However, what you can do faster is the production of components, assembling and testing the machine.”

While Mühlbauer is permanently looking for new staffers, it is not perceiving the carmakers in its vicinity as competitors: Jaguar Land Rover in Nitra and Stellantis in Trnava.

“Not everybody wants to work on a production line, even when the cars of prominent brands are rolling off it,” said Paškrta.

They still see a lot of labour potential in and around Nitra, the reason why they also started at with dual education at the very beginning. Later they began to cooperate with universities and today plenty of students are working with them.

“Of course, we need more staffers, but we look for quality, not quantity; this is the basic premise,” said Paškrta.

Neither the pandemic, which resulted in a shortage of chips, nor the war in Ukraine have had a negative impact on the company in Nitra. They plan to build a third hall next year for €21 million. It will house technologies for sheet metal processing as well as a technical centre for the development of mobile technologies. The company has received a state stimulus of €1.95 million in the form of a tax holiday. This will be their third stimulus, the first two totalling €8.1 million.

Paškrta thinks of the innovation process as a never-ending story and does not worry about the future of innovative companies.

“There will always be crazy people in the world who want to do things differently, like Elon Musk or Steve Jobs, and who need fools to say yes, we can [make it for you],” said Paškrta.