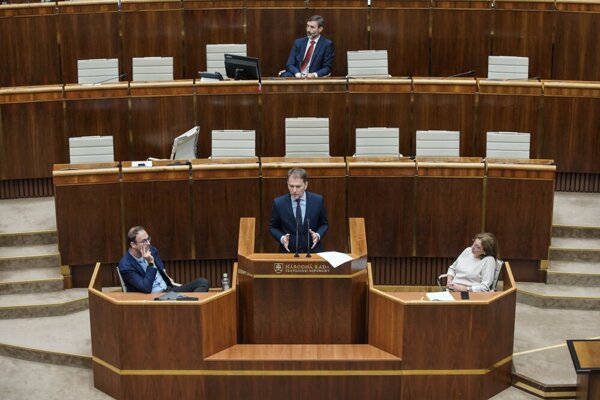 OĽaNO leader Igor Matovič will remain finance minister at least until Tuesday after a vote on removing him from his post was repeatedly delayed.

A vote had initially been scheduled at 11:00 today but Matovič made a long speech that went past that time, pushing the vote back to 17:00. But that too had to be postponed when, just minutes before, OĽaNO MP Ján Kerekréti collapsed in parliament, needing medical attention.

After that, MPs agreed to postpone the vote until Tuesday - parliament's next regular sitting.

The parliament interrupted its regular September session on Wednesday and Thursday to hold the extraordinary session on a no confidence vote in Matovič as finance minister.

The initiative came from the former coalition Freedom and Solidarity (SaS) party , which gave an ultimatum to its former coalition partners over the summer that either Matovič goes, or their four ministers resign and SaS becomes an opposition party.

Matovič remained, and the September session of the parliament is the first after the government of Eduard Heger lost its majority in the house.

"We can no longer close our eyes to the unprecedented missteps of Minister Matovič, and we are not the only ones who say this, society also thinks so. He went from an election winner to the member of government with the lowest public trust," said leader of the SaS caucus Anna Zemanová when presenting the proposal to remove him.

In the proposal, which was also signed by members of the Hlas party of Peter Pellegrini, SaS listed the mismanagement of public finances, maintaining the society in a state of conflict, vulgar communication and attacks against the media as reasons for Matovič to be removed.

They attacked him for his vaccination lottery, the unauthorised purchase of the Russian Sputnik V Covid vaccine, and a package of measures Matovič pushed through parliament with the help of far-right MPs.

Vote will be a close call