Bratislava's world-class biennial festival is back

The Bratislava Animation Biennial offers animated short and feature films for both adults and children, plus exhibitions and lectures. 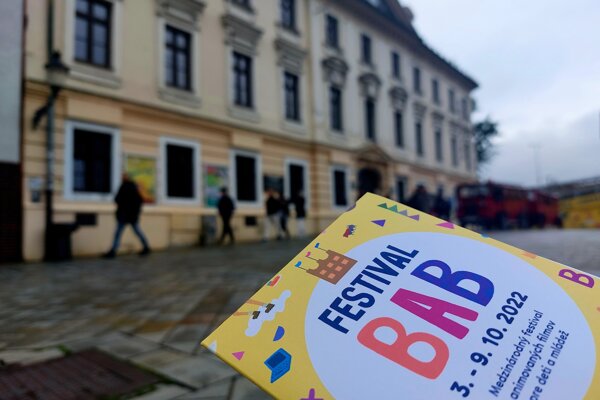 Cate Strophe, a young reporter from the Ka-boom! television channel, earned fame for her fearlessness and determination to explore natural mysteries in a fun way.

Notably, she reached the land of clouds before Christmas and confronted water drops to find out why there was mud instead of snow in December – a catastrophe to many.

The reporter, obviously, is not a real person. She is an animated main character from the popular Slovak bedtime TV miniseries, “Tresky Plesky” (Ka-boom!), which was created in 2017 by film director and illustrator Veronika Zúbek Kocourková. In the first week of October, children can experience Cate Strophe’s fantasy world at Bibiana, the International House of Art for Children in Bratislava – while also meeting monkeys and a giant whale, and going skiing in the centre of the Slovak capital.

The exhibition is part of this year’s Biennial of Animation Bratislava (BAB), which is held in the city from October 3 to 9.

“The goal of the exhibition is to redirect children’s attention from TV screens to reality,” the film director said.

Invitation to the Biennial of Animation Bratislava:

In addition to a number of exhibitions, children and adults can enjoy watching international and Slovak short and feature animated films in cinemas, on TV and online, or they can go to lectures devoted to animation at the Academy of Performing Arts’ film and television faculty.

“This year’s programme accomplishes the mission of BAB, which is to mould children’s taste,” said Bibiana and BAB director Zuzana Liptáková.

All events are free of charge; the complete list is available online.

During the festival children will have an opportunity to see the Animanimals exhibition, a 3D adaptation of Julia Ocker’s award-winning German TV series “Animanimals” from 2018. The collection of 52 short, animated films teaches children to transform their weaknesses into strengths.

At Bibiana, children can sit on a bench that looks like a dachshund, become an octopus that needs help with baking, or can bow the trunk of an elephant, organisers said.

Those who love computer games can explore the story of “Creaks”, a 2020 Czech game full of adventures, rooms and logical problems waiting to be solved. “The exhibition features original sketches from the initial stages of the game’s development,” organisers noted. Visitors can even play the game at Bratislava’s house of art.

Oscar-nominated directors to speak in Bratislava

The festival will also host several successful filmmakers from the world of animation.

In Bratislava, Koji Yamamura, an award-winning Japanese animator whose “Mt. Head” (2002), a short film about a man with a tree growing on his head who commits suicide, was nominated for an Oscar, will speak about his new and first feature-length animated film, “Dozen of Norths”. In the film, he depicts people who are lives are stuck for different reasons.

Hisko Hulsing, a Dutch filmmaker, will also attend the festival to talk about his directing experience for Amazon and Netflix. He’s behind the adult animated psychological drama series “Undone” (2019), but Hulsing also directed “A Dream of a Thousand Cats”, an episode from Netflix’s fantasy drama series “The Sandman” (2022), a series that is inspired by a comic book of the same name.

For adults, organisers have prepared the Black Flag film section, curated by Slovak film director Peter Budinský. The selection of short-animated films includes “Birds Whose Legs Break Off” (2022, Germany), “Alestorm-Shit Boat (No Fans)” (2020, Australia), as well as the Belgian film “Aborted – Dementophobia” from 2021.

Just like Yamamura, the Budapest-based filmmaker Géza Tóth was also nominated for an Academy Award for his animated short film “Maestro” (2005), which depicts the last minutes before Maestro’s performance. The Hungarian will hold a lecture about his film art, while the Hungarian Institute will showcase his animation work for children.

More than 90 films to be screened at the festival will compete for several awards, including the UNICEF Award and the Viktor Kubal Prize, which is named after the father of Slovak animation.

In total, more than 1,700 films from 97 countries have been submitted to BAB this year.

For the first time, the festival will award a Junior Award to the best child animation filmmaker.

“Animation can be seen as a way of raising many important societal issues and bringing them to the attention of a child audience in an understandable way,” said Andrej Zaťko, CEO of 365.bank who will present the prize to the winner on October 7, when the closing ceremony will take place. Zaťko added that animation can shape children’s views on areas that are key to the future of Slovak society.

Nineteen films that were created by young filmmakers from central Europe as well as countries as diverse as the Philippines and Uzbekistan will compete for the award. “The Magic Ice Cream” from 2020 represents Slovakia.

Apart from films in competition, the festival will screen several animated features like “My Sunny Maad” (2021), a film about a woman who falls in love with an Afghan man called Nazira and who together leave for Afghanistan, and “The Crossing” (2021), which tells the story of siblings Kyona and Adriel fleeing persecution in an unidentified eastern European country. “Fritzi: A Revolutionary Tale” (2019), set in East Germany in 1989, recounts the story of two friends and a dog named Sputnik.

Films can be watched at Bratislava’s Mladosť cinema and the Umelka Gallery, or online. Selected films will be shown in the towns of Košice, Trnava, Hlohovec, Piešťany, Nitra, Martin, Poprad, Prešov and Banská Bystrica.

“The internet is flooded with a wealth of low-quality and even dangerous content for children. One of the goals of our festival is to show parents and children that quality alternatives also exist,” concluded the BAB’s programme director Tomáš Danay.