Robert Leslie plays from metros of New York to towns of Slovakia. 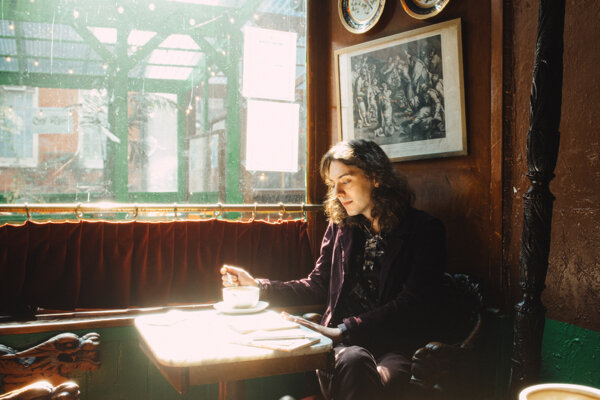 To Robert Leslie, Slovakia feels liminal. It is a place that's waiting for something. The countryside feels wide, open, and empty, well cared for rather than wild. All the abandoned pre-1989 infrastructure and factories made a strong impression of decay and huge changes on the musician who travelled the country earlier this autumn for a string of gigs.

The European tour of the formerly busking musician performing on streets across the world led him to different places. From loud metros in New York and busy streets of Dresden, Paris or Dublin, the small Slovak bars were a change in pace. People vary in characters. Some are curious, others are shy. The audience responds differently, the atmosphere seems to be heavier here and lighter there. There’s shared experience, kindness, wry sense of Slovak humour. Everything seems quieter.

Leslie performed in Rožňava on September 15, Banská Bystrica on September 19 and Bratislava on September 30, 2022. The cultural context as well as the language barrier made a difference in performing and gave him the feeling of a shared confusion that he enjoyed.

“The misunderstandings are funny, and the understanding feels more valuable because it crosses a distance,” explained Leslie on how the lyrics tend to land.

Sustaining on the road

A need to start performing on streets comes from various places. Having a solid, supportive background helps one to drop everything and concentrate on building a music career. However, the opposite could be a driving force as well.

“Many people hit the road precisely because their home life has become unbearable. Doing it with a carefree attitude and a smile on your face is bound to be a lot easier if you know you have a safety net,” explained Leslie.

Sustaining a normal life on the go is another part of living a busking life. To an outsider, busking might seem stressful. A constant need for improvisation, fear of uncertainty – all and many more aspects could change the journey. In reality, it’s the opposite.

“You strip life down to where to sleep, what to eat, where to go next. These are very natural, simple questions, the elemental questions that our bodies and minds were designed to answer,” said Leslie.

To musicians, such simple things are much easier to answer than existential things of philosophy, like achieving happiness or fulfilling ambitions. On the other hand, one can easily spiral into stress while having troubles scrounging money for food or shelter.

His portfolio of questions widened as Leslie grew from a busking performer to a selling artist, questions like how to sell music to a wider audience.

Looking challenges and reality in the eye seem to reappear in Leslie’s life. Growing from a busking musician to a selling performer, Leslie gathered some well-known names to help work on his new music, like producers of Weezer and Panic! At the Disco or bass players who used to tour with Bob Dylan.

Such a change, however, forces musicians to concentrate on reaching higher standards. Leslie describes the shift in performing a concert as a time in which he has the full attention of people who purposefully went there, in comparison to a street concert where people pass by and sometimes stop.

His latest album carries the name Halfway Home, which was released on August 5.

To drop everything and run away from unbearable situations at home might seem like escapism. While this is an element in some of Leslie’s songs, the musician does not see his music as an escapism from what he left behind.

“Music is catharsis, it's processing, it's looking emotions in the eye - almost the opposite of escapism,” said Leslie