Far-right parties were the big losers in Slovakia’s recent regional and municipal elections, but Republika could still end up in a ruling coalition after the next general election. 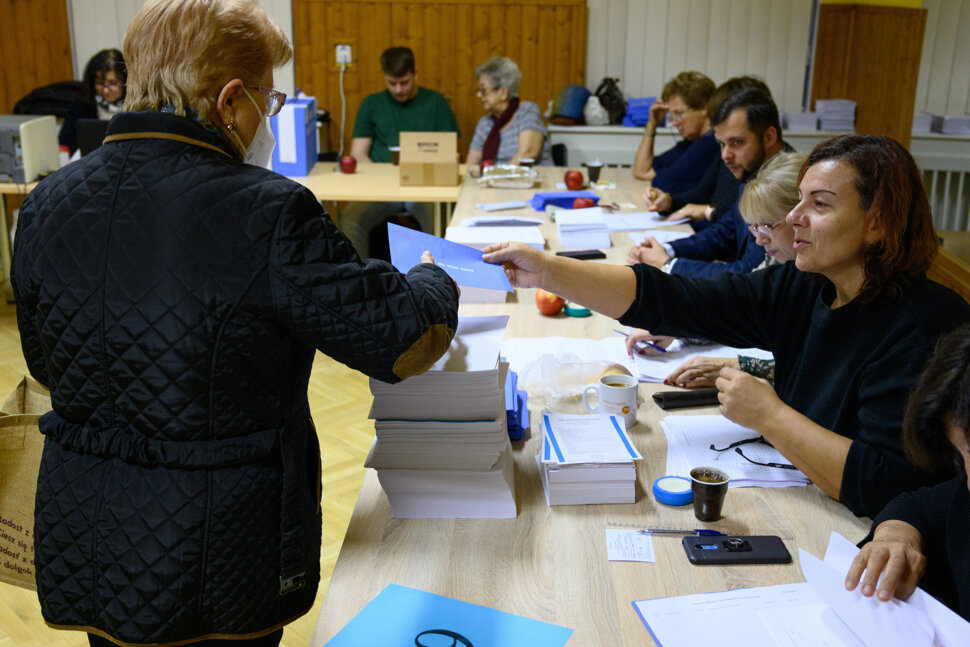 Marian Kotleba, Slovakia’s most notorious far-right politician, had hoped the recent regional elections would be payback time for entrepreneur Ján Lunter, governor of the Banská Bystrica Region, a post occupied by Kotleba for four years following his shock 2013 win over a candidate from the main democratic parties.

Lunter, however, spoilt Kotleba’s planned revenge party by announcing he wouldn’t run for re-election and instead encouraged his son Ondrej, who served as deputy governor in his father’s administration, to join the gubernatorial race.

Kotleba himself was barred from running in the election after being convicted in April this year of expressing sympathy for extremism, so he had to find another candidate to step in to compete against Lunter’s son. Kotleba chose his brother, Marek.

“People ask us not to give up the fight, so we came up with this solution,” Kotleba said over the summer.

“The results are not what we would have liked to see,” Kotleba, who lost his seat in parliament as a result of the court verdict in April, admitted a day after the October 29 election.

Observers generally agree that the far-right was the big loser of this year’s joint regional-municipal elections.

“People are aware of the specifics of these elections, the consequences for everyday life,” said sociologist Silvia Porubänová. “They’ve learned it’s necessary to elect experts, those who have the courage to do or have done something for their community.”

Kotleba’s stint as governor of the Banská Bystrica Region was not a success: it was most notable for his cancelling a number of EU-funded projects, as well as blocking a grant for a puppet theatre’s “Stop Extremism” initiative.

In fact, Slovakia’s far-right – with the exception of Kotleba’s win nine years ago – has never fared well in regional or municipal elections, certainly not as well as it has performed in national parliamentary elections.

Even so, the far-right MEP Milan Uhrík described the performance of his Republika party, which he established with other renegades from Kotleba’s People’s Party Our Slovakia (ĽSNS) last March, as a “decent result”.

“We can now fully concentrate on what is a priority for us – national politics,” Uhrík said. 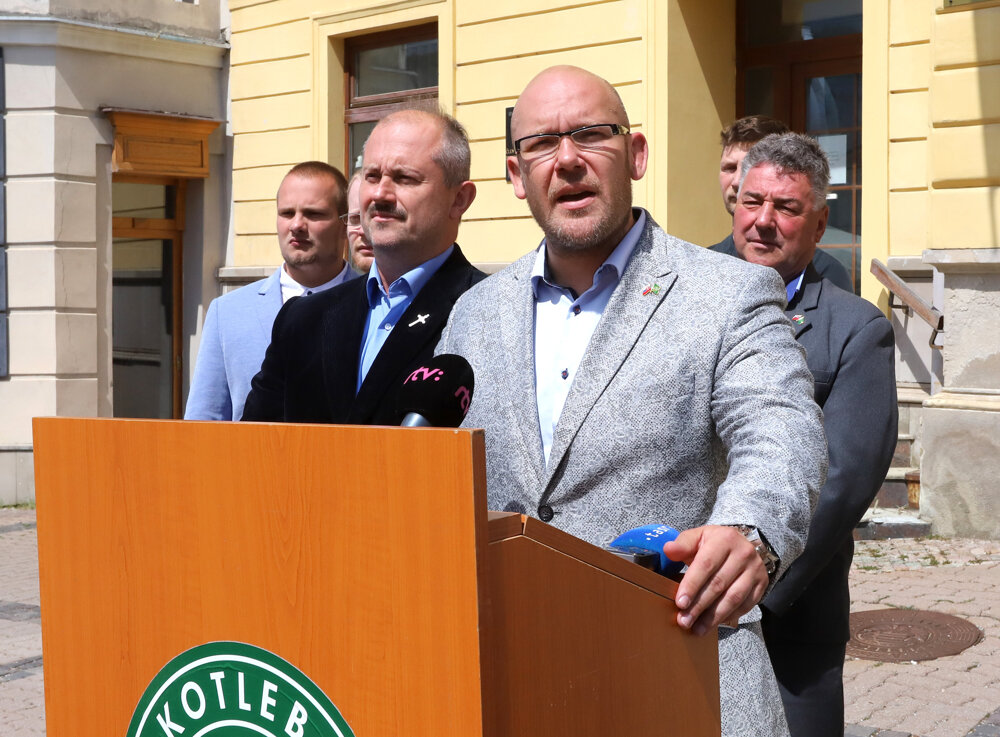 Marek Kotleba of the far-right ĽSNS party announces his candidacy for chair of the Banská Bystrica Region on June 1, 2022. His brother Marian Kotleba, ĽSNS chair, stands next to him. (Source: TASR - Ján Krošlák)

In these elections on October 29, Slovak voters elected 20,523 local councillors in 2,919 municipalities and 419 regional councillors in eight regions, in addition to numerous mayors and governors.

Republika improved its position by, in large part, stealing votes from Kotleba’s ĽSNS. In regions and towns, one mayor, 23 local councillors, but no single governor or regional councillors will represent Kotleba’s party – a result similar to the years 2017 and 2018 when previous local elections were held.

“It seems that ĽSNS is on the decline,” Martin Slosiarik, head of the Focus polling agency, said in a round of post-election broadcast interviews.

This is a huge let-down for a party that in the 2020 parliamentary election found itself as the fourth strongest party in parliament. An October poll, conducted by the AKO polling agency, shows just 2.6 percent of people would vote for ĽSNS and 6.6 percent for Republika in a parliamentary election, meaning Kotleba’s party would now fail to meet the 5 percent threshold to get into parliament.

Slosiarik speculates that Republika may have been using the recent local elections as a testcase ahead of the 2024 parliamentary election.

Uhrík’s party on its own won five mayoral seats, 103 local councillors, and one regional councillor. The regional councillor, MP Milan Mazurek, ran for governor in the Prešov Region but ended up in third place with just 10.9 percent of the vote. In 2019, a court found Mazurek guilty of making racist anti-Roma remarks on the radio. Thanks to it forming local and regional coalitions with Hlas and Smer, the current strongest mainstream parties according to polls, Republika won a few more seats.

Yet neither of the two far-right parties won a governorship despite nominating a candidate in every region, including three Republika and four ĽSNS MPs who all suffered crushing defeats.

“The problem of far-right parties is that their electorate is fixed to strong leaders, while others are not recognisable,” electoral mapper Tibor Madleňák of the Matej Bel University in Banská Bystrica, told the Slovak Spectator before the local election.

But several other MPs from mainstream democratic parties found themselves in a similar situation to the group of far-right MPs. Porubänová provides a pragmatic explanation for this.

“People are very well aware that it’s not possible to combine the work of a lawmaker with real and effective work in the local or regional council,” she says. 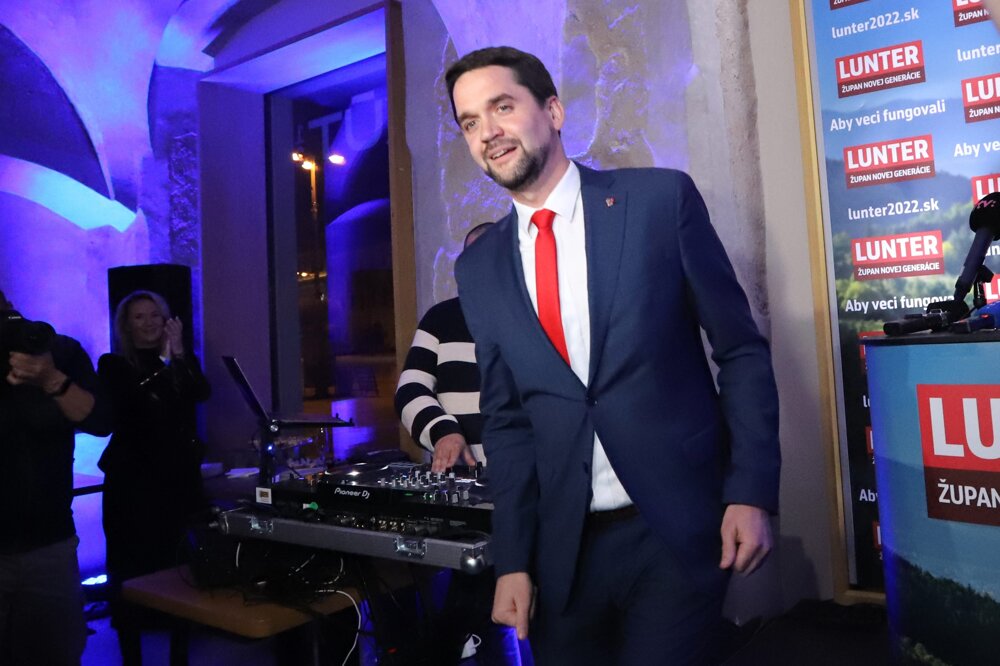 Ondrej Lunter waits for the results of the gubernatorial election for the self-governing region of Banská Bystrica on October 29, 2022 at the election headquarters. (Source: TASR - Ján Krošlák)

As for the overall poor scores of far-right parties in the recent elections, observers highlight the recent fragmentation of Kotleba’s party and the subsequent establishment of Republika.

In the gubernatorial race in Banská Bystrica, for example, four candidates could be identified as extremist: Rudolf Huliak (National Coalition), MP Miroslav Suja (Republika), MP Marek Kotleba (ĽSNS) and Jozef Sásik (Slovak People’s Party). Of those extremist politicians, Huliak fared best by coming third. Together, they won 55,354 votes, or 29.2 percent. Had there been just a single extremist candidate, he would have come in second after Lunter, who won 96,438 votes.

“Their [far-right parties’] target group is the same and it’s not weak,” stressed Václav Hřích of the AKO agency in an interview with the TASR news agency.

Political analyst Grigorij Mesežnikov went further, telling the Markíza television channel that these parties, if integrated, could become the third strongest bloc in national politics after the centre-right and centre-left blocs. “It is a challenge for the current democratic parties to influence voters so that this does not happen,” he said.

But any reintegration of Republika with ĽSNS seems unlikely for now.

In the RTVS public broadcaster’s political debate show broadcast after the election, Uhrík publicly said that ĽSNS is “a terminal party” and called on Slovak patriots to join Republika. On Facebook, in response to Uhrík’s statement, Kotleba labelled the Republika chair as “a man who serves the plans of globalists” and accused him of dividing ĽSNS in collaboration with secret agents.

“Behind the division of our party is his ambition to be the chairman and to get into a government coalition with someone at any cost,” Kotleba added.

Of the Slovak far-right parties, opinion polls clearly favour Republika. The party could climb over 5-percent threshold in the next parliamentary election and win seats in the national legislature, replacing ĽSNS. In 2020, ĽSNS, with almost 8 percent, or 229,660 votes, won 17 seats in the 150-seat parliament.

Different electoral systems used in the parliamentary and local elections are also cited by experts as a reason why far-right parties did so badly in the October 29 elections. The majority system used in local elections consists of numerous wards so tends to favour candidates known in a given area rather than political parties, but the proportional representation system in the national elections sees Slovakia as one electoral ward and is party-based. At the national level, it’s therefore more difficult to form coalitions. 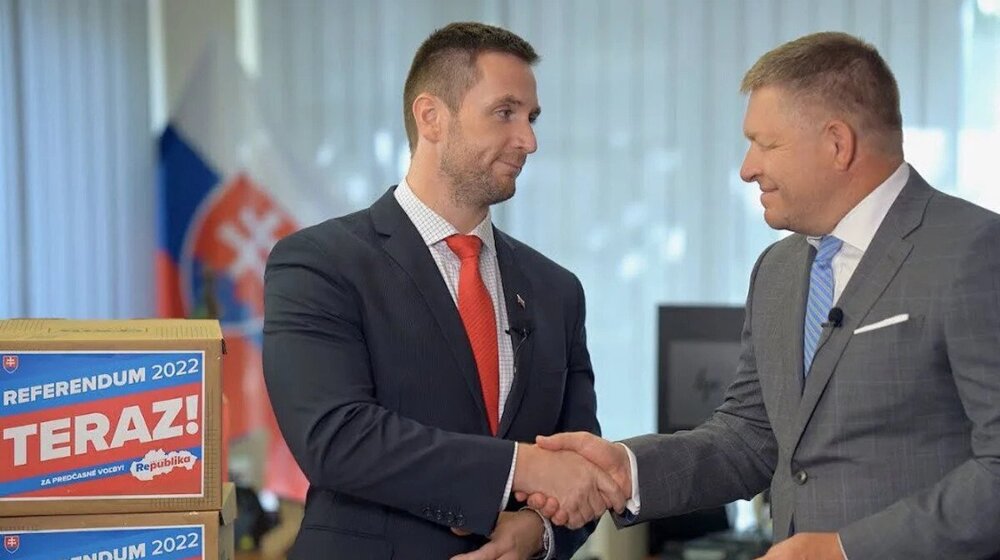 Republika and the 2024 election

Republika’s Uhrík does little to hide his national political ambitions. “We have shown that we have coalition potential,” he said during the debate on RTVS.

Slosiarik of the Focus polling agency, who doesn’t see any trend of a retreat on the part of far-right parties, estimates that Republika’s potential support oscillates at around 10 per cent, stressing the party might tip the scales in any coalition talks, which could shape the country’s future for the coming decade.

Previously, the former ruling party Smer hasn’t shied away from collaborating with ĽSNS, whether that was the 2018 vote on the UN’s migration pact, the 2019 vote on the 50-day moratorium on pre-election polls, or this year’s vote on the US-Slovakia Defence Cooperation Agreement. And this despite Smer’s chairman and former prime minister Robert Fico pledging in 2017 that his party would fight extremism.

In February, Fico announced he would not mind cooperating with Republika after the 2024 parliamentary election. While Republika’s members have criticised Fico in the past, they refused to support a request for Fico’s arrest in May and helped collect signatures for Fico’s snap election referendum.

In the recent local elections, Hlas, Smer and Republika formed several coalitions. Together, the three won three mayoral seats in the districts of Námestovo, Žilina and Kysucké Nové Mesto in northern Slovakia.

When the Denník N daily asked Slosiarik if the performance of far-right parties in the local election suggests their end is nigh, he shook his head: “They’re definitely not defeated.”