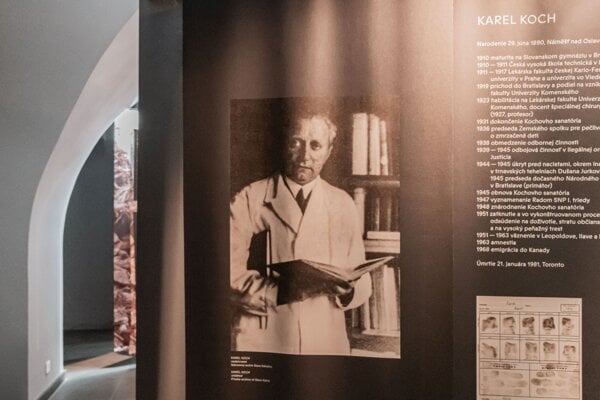 Among the splendid villas on the hill behind Bratislava castle, dense greenery hides the Koch Sanatorium. Today this building, with its brick façade, is now a well-known maternity clinic, but few Bratislavans know much about the moving story of its founder, doctor of medicine Karel Koch, who was once one of the most prominent figures in Slovak surgery.

“He experienced a stellar career in the interwar period, when he became an important citizen of Bratislava. He established a sanatorium here and worked as a university teacher,” said Tomáš Zapletal from the Academy of Arts, Architecture and Design in Prague, one of the curators of the Human to Human exhibition at the Bratislava City Museum. “This position contrasts sharply with what he experienced after WWII. In the 1950s he ended up as a political prisoner in the hardest prisons, deprived of his civil rights.”

The exhibition introduces Koch in a non-traditional way, with the focus on his mental world and his life-philosophy, which he shared with his close friend, the architect Dušan Jurkovič. The latter designed the sanatorium as an embodiment Koch’s philosophy of healing.

Who was Karel Koch?

Karel Koch was born in 1890 in the southern Czech town of Náměšť nad Oslavou. After studying medicine in Prague and Vienna between 1911 and 1917, he arrived in Bratislava in 1919 as part of a group of doctors led by Professor Stanislav Kostlivý. The latter was instrumental in founding the Medical Faculty of Comenius University and the surgical school in Bratislava, which had just become the new capital of the Slovak part of Czechoslovakia. Koch became associate professor at the Faculty of Medicine in 1923 and full professor in 1927, specialising in surgery.

It is not known when and where Koch and Jurkovič (1868-1947) met for the first time. It may have been at a sports club, as both were big fans of figure skating and other sports. They also shared a love of cars.

“Even though Jurkovič was 22 years older, they were close friends and shared the same life-philosophy,” said Jitka Škopová, the author of the concept of the exhibition.

Jurkovič designed, in cooperation with Jindřich Merganc and Otokár Klimeš, the sanatorium on Partizánska Street for Koch as a compact whole. The adjacent garden was designed by Jozef Mišák. The facility opened in 1931. It was aimed primarily at female patients and was one of the most modern facilities of its kind in Czechoslovakia. It fully reflected the contemporary focus on hygiene that was a pan-societal topic of the 1920s and 1930s.

“Koch was convinced that the healing power of nature positively affected both one’s physical condition and mental health, and this conception is reflected in the architecture of the sanatorium,” said Alena Kotyza, another of the curators.

The sanatorium, which is laid out like an extended letter ‘V’, fits harmonically into the surroundings, while the adjacent garden with its varied and numerous foreign and exotic trees and bushes, offered recuperation both for the body and mind at fountains, in a pool or in sunbathing facilities.

The facility offered free care to the needy, alongside its regular high-standard care for female patients.

Along with his work at the sanatorium and at the university, Koch devoted a large portion of his interest to “crippled people”, as disabled people were referred to at the time within the medical profession as well as by society at large. Among this group were soldiers who had been injured during WWI.

“Being a cripple can disappear from this world completely if there is goodwill on both sides to break its crutches,” the exhibition cites from Koch’s book ‘The Cripples without the World and the World without the Cripples’ from 1941.

With the onset of Nazi ideology, Koch began to cooperate closely with the illegal underground resistance movement Obrana Národa (Defence of the Nation) and later founded another such organisation himself, Justícia (Justice).

In 1938 his professional activities were restricted. One year later, in 1939, after the German occupation of the Czech lands, his sanatorium was confiscated and he was allowed to perform surgery only two times per week and to treat prominent German patients. In 1941 he was accused of espionage and interrogated by the Gestapo in Brno and Vienna. This experience did not prevent him from re-joining the resistance movement, and during the war he helped Jewish people to evade deportation. Between 1944 and 1945, Jurkovič hid Koch from the Nazis in his Trnava brick factory.

A few days after Bratislava was liberated on April 4, 1945, Koch was elected mayor of Bratislava. But he held the post for only three days, stepping down to reconstruct his devastated sanatorium. But even his receipt of the Order of the Slovak National Uprising (first class) in 1947 did not spare him from having his sanatorium nationalised in 1948.

Just as he had disagreed with far-right politics, so the newly emergent far-left ideology of the communist regime, which had seized power in a coup in February 1948, did not align with his world-view and humanist principles. This quickly made him enemies, and in 1951 he was accused on trumped-up charges of treason. After a politicised trial, he was found guilty and sentenced to life imprisonment, forfeiture of his assets and lifelong loss of his civil rights.

In 1963, after 12 years of serving in various prisons, he was amnestied. He then lived in relative poverty in Bratislava for five years before he was able to emigrate to Canada with his family in the aftermath of the Warsaw Pact invasion of Czechoslovakia in 1968. By then an elderly man of 73, he never returned to Czechoslovakia and died in Toronto in 1981.

“Karel Koch did not live to witness his rehabilitation in 1991,” said Škopová.

In spite of his legacy, most visibly in medicine and social activism, Koch has since fallen into almost complete oblivion.

Searching for Koch’s legacy in Canada, but in vain

The curators of the exhibition from the Academy of Arts, Architecture and Design in Prague, when preparing the exhibition Human to Human, faced a challenge: the absence of documents and artefacts linked to Koch.

“One should realise that there was almost nothing left of Koch’s legacy because at first he was in the anti-Nazi resistance and then in the anti-communist one,” said Škopová, adding that people felt they had to get rid of items connected to Koch for fear of being persecuted.

The researchers even travelled to Canada, but their search ended in vain. They were unable to locate or contact his relatives, or anyone who had even known or remembered him.

“We only have the words written in his books,” said Škopová, explaining the non-traditional concept of the exhibition. “We decided to present him via his words, as a thinker.”

The title of the exhibition Human to Human refers to the central motif of Koch’s thinking: the highest mission of man is humanity, which is fulfilled by unconditionally human action and in service to other people. This phrase is reminiscent of Goethe’s words, to which Koch refers repeatedly in his texts.

The exhibition is divided into two parts. The first features the Koch Sanatorium, its recent successful reconstruction and the adjacent, neglected garden. Recently, the City of Bratislava has acquired full ownership of the garden and plans to restore it to its original condition. The second part is devoted to Koch and Jurkovič, and their shared life-philosophy. In his texts, Koch also deals extensively with the topics of politics, war, the expulsion of nations after WWII, and Czechoslovakism.

“For me, their legacy is their courage to step out of their comfort zone,” curator Alena Kotyza says of the two friends, adding that they did so even late into their lives. “They were never afraid to do something for the disadvantaged or unjustly persecuted.”