Collapse of hospitals averted, doctors' unions and government have a deal

An agreement on salaries was reached on Saturday night, five days before mass departures of hospital doctors. 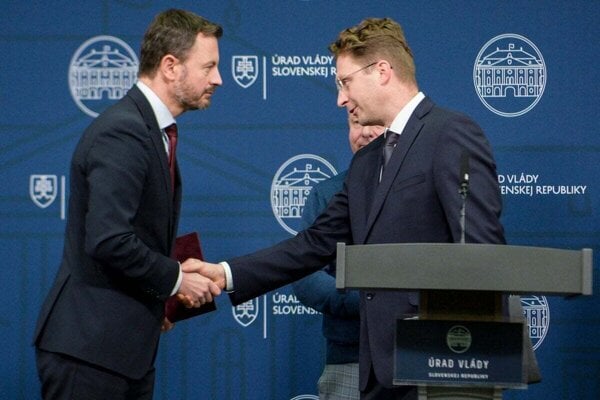 The crisis in Slovak hospitals has been averted, Prime Minister Eduard Heger announced on Saturday night. After the final six-hour-long negotiation, the government and the representatives of the Medical Trade Unions agreed on doctors' salaries.

The announcement came only five days before the approximately 2,100 protesting doctors were expected to quit their jobs. About a quarter of all doctors in state hospitals have handed in notices of resignation, most of which will take effect on December 1. The resignations were an act of protest to support the eight demands put forward by the Medical Trade Unions (LOZ), though in the negotiations over the past week, the agreement on salaries appeared to have been the main problem.

On Saturday, Heger said the government eventually agreed to spend an additional €40 million for doctors' salaries, as demanded by LOZ. The doctors will not receive the stabilisation contribution (a retention bonus), but it will remain in force for other health care workers. The special contribution was proposed by Finance Minister Igor Matovič last week. The final agreement on salaries was reached shortly after Matovič announced he was no longer taking part in the negotiations.