They will serve for wine tasting, concerts and other cultural events 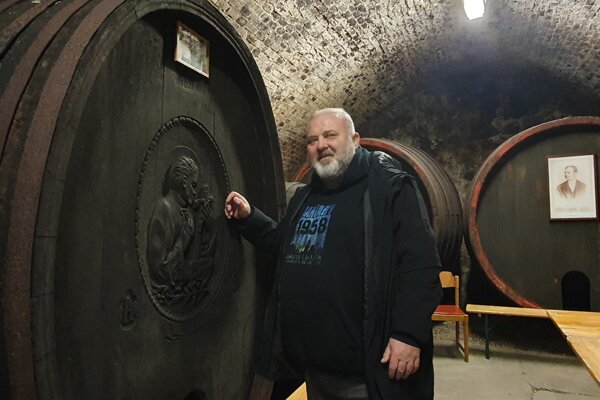 Augustín Mrázik next to the barrel Alois Sonntag got from his wife as a present. (Source: Jana Liptáková)
Font size:A-|A+  Comments disabled

Currant wine is an inseparable part of Devín, a borough of Bratislava. However, the historical cellars of Alois Sonntag, in which this fruit wine grew to be a local phenomenon, were inaccessible for more than two decades. The unexpected offer of buying these cellars along with the adjacent house was extremely tempting for Augustín Mrázik, the main initiator of the restoration of the currant wine tradition in Devín. However, the bad condition of the neglected premises made the decision-making process difficult for him. In the end, given the history associated with this place, he bought it for an undisclosed price. He plans to resume the production of currant wine, use the historic cellars for wine tastings and create a small museum of Devín.

“It’s unbelievable, but exactly one hundred years after the creation of the tradition of Devín’s currant wine, the circle closes and currant wine returns to ‘its’ cellars,” Mrázik told The Slovak Spectator.

In Devín, grape wine has been produced since old times. Excavations prove the cultivation of vine and the production of wine already when the Celts lived in this territory, approximately the 2nd century BC.

But the glorious history of currant wine began in the 1920s. After the demise of the Austro-Hungarian Empire in 1918, local growers of currants lost their markets. Until then, currants had been transported daily by boat to Vienna. Alois Sonntag, an Austrian by origin, who moved to Devín with his mother after they bought a house in 1904, came up with the idea of making wine from currants in large volumes. Locals had produced currant wine in small quantities for their own consumption.

“Alois Sonntag started the large-scale production of currant wine in 1922 in this very place,” said Mrázik, noting that Sonntag was not originally a winemaker. They had a textile shop in Bratislava.

Over the next 15 years, Alois Sonntag built a winery with an annual production of 175,000 litres. This is a large amount even from today’s point of view, noted Mrázik. Sonntag stored wine in a large two-nave cellar in the yard of his winery.