On migrants, Slovakia is stuck between a rock (Czechia) and a hard place (Hungary)

Thousands of migrants are trapped in Slovakia as the Czechs prevent them from crossing into their territory, while Hungary refuses to take back those that crossed from there into Slovakia. The government is struggling to come up with a solution. 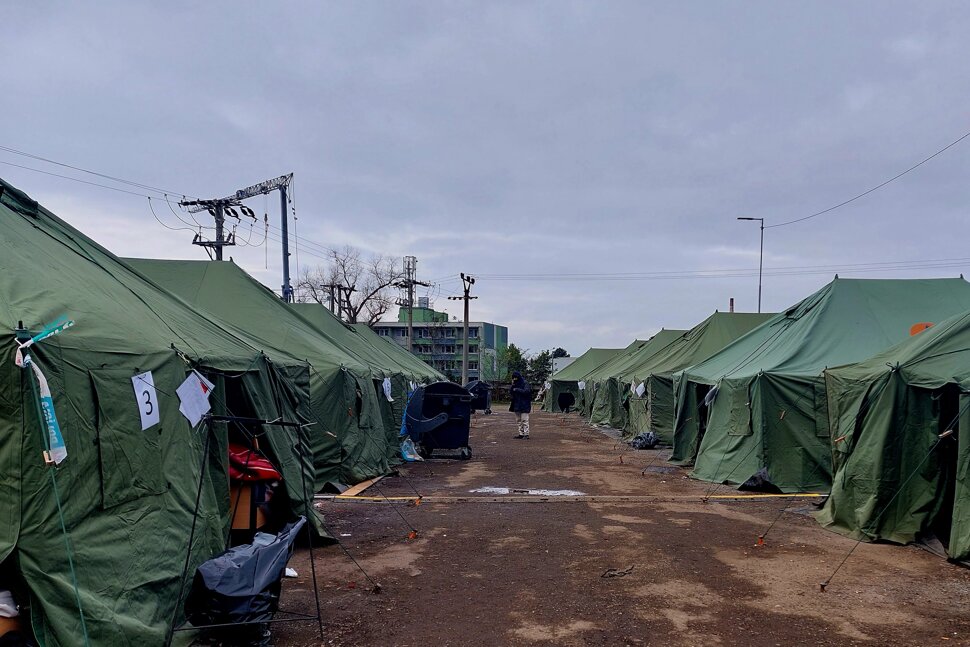 On the balcony of one of several blocks of flats in the Slovak town of Kúty, a major transport hub near the Czech border, a lady waters her potted plants. A calm day, yet what worries her and other residents are their new neighbours – unsettled migrants mostly from Syria.

Slovakia’s Interior Ministry has set up a tent town that can house up to 200 migrants next to the residential area and a railway station in early November, after an increase in reports about groups of migrants stopping between towns and across fields near the border after the Czech Republic and Austria reintroduced border checks with Slovakia.

“My cousin [lives] in Vienna,” Mohammad explained, sitting on his bed and trying to call his cousin. “He will help me find a job.”

In a large, heated tent that Mohammad shared with a group of other Syrians, it was rather quiet. His tentmates spoke to relatives on the phone, rested on beds, or smoked outside in the alley between two lines of tents. A daily routine at the tent town, guarded by police officers and soldiers, starts with a light breakfast and a doctor’s visit, and ends with supper. Throughout the day, migrants wander around the railway station, walk to the nearby grocery store, plan their trip to further west, or stroll towards the town’s centre.

Their presence, however, makes local people feel uneasy, although the police have recorded no offences or crimes committed by migrants. To reassure people, organisations providing the migrants with food and clothing published a statement in mid-November.

“We don’t meet criminals, we meet everyday people who have found themselves in a difficult situation,” they wrote. “To this day, not one of them has given us any reason to fear or worry about our safety.”

Unconvinced, the town of 4,000, just an hour’s train ride from Bratislava, wants the tent town gone. Yet the government has no ambition to pull down the tent town while irregular migration remains a problem and is calling for better protection of the EU’s external border in Hungary with Serbia. This is, inevitably, a fraught situation that the far-right, a relatively strong presence in Slovakia, is looking to exploit for its own ends. 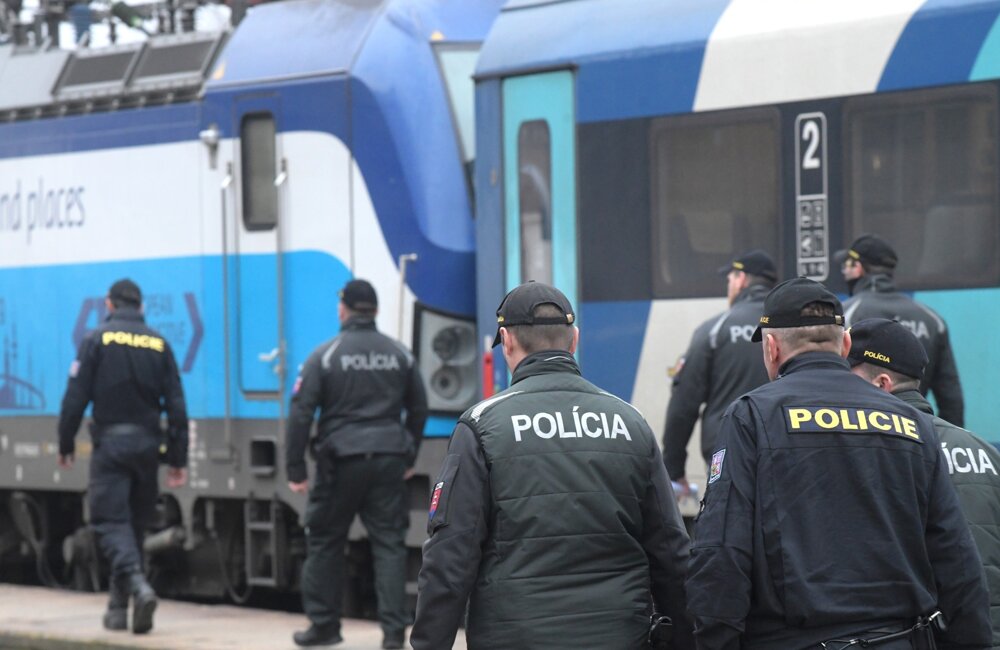 Slovak and Czech police officers control trains in Kúty on November 23, 2022. Slovakia and Czechia have reinforced their police patrols alongside the border following an increase in illegal migration. (Source: Facebook/Slovak Interior Ministry)

The camp is staying

Local people told The Slovak Spectator that they are scared to send their children to school or play outside on their own since the arrival of the migrants, mostly men. They consider the migrants moving around the town in large groups to be a problem.

“I disagree with it [migrants’ presence in Kúty],” said a bartender from a pub a stone’s throw from the camp. A mother herself, she said she felt sorry for what the Syrians had endured, but at the same time she would feel safer if the migrants were under lock and key.

Like the Syrian engineer Mohammad, every migrant discovered by the Slovak police receives proof of legal stay after registration. It allows them to move around Slovakia but grants no rights to them, as they do not want to apply for asylum in the country.

“People should trust the state,” Miroslava Mittelmannová, head of the Human Rights League, told the TA3 television news channel last week. “The police know what to do.”

But even Kúty’s long-time mayor, Branislav Vávra, has been at the forefront of those demanding the closure of the tent town since the very beginning. As he explained to The Slovak Spectator, he does not oppose helping migrants, but he argues the state should provide any assistance to migrants at its near-empty facilities for asylum seekers.

The Interior Ministry, however, points to Kúty’s close location to the Czech Republic, through which migrants have been trying to travel to Germany. International trains also stop at Kúty.

“Staying further away from the route would complicate their plan to get there,” the ministry explained.

It added the Migration Office would place migrants in other facilities if they chose to become asylum seekers. The nearest functional facility for asylum seekers is located in Rohovce, near the Hungarian border and close to the Slovak capital.

A similar facility used to operate in Gbely, a town next to Kúty, until early 2006, when the state sold the building to the town. Gbely is now trying to sell the run-down building. 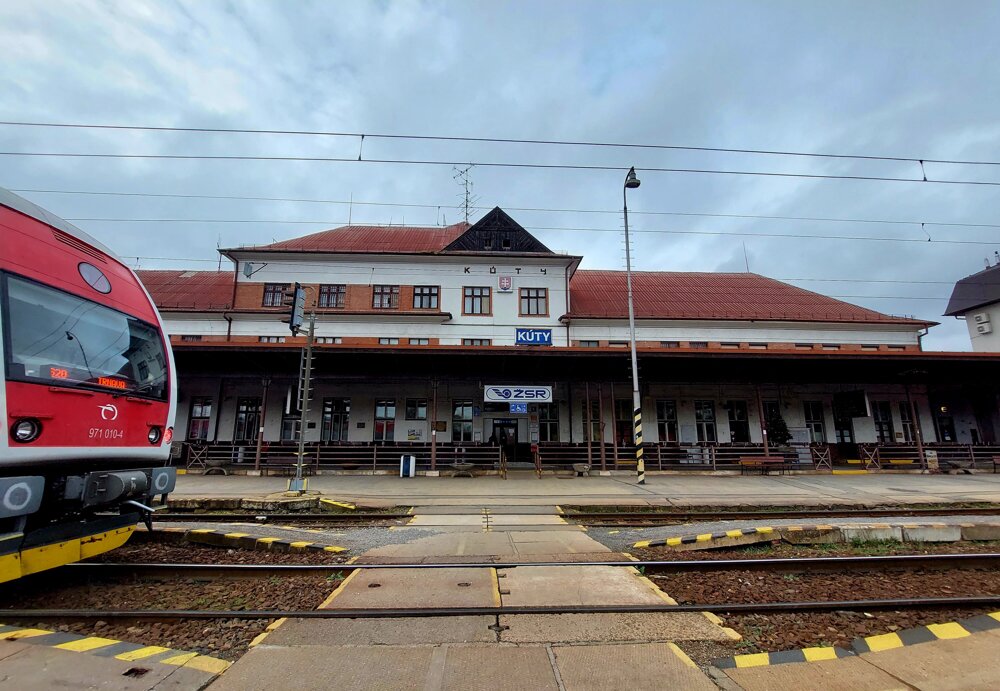 An appeal for compassion

Meanwhile, in Kúty, it is local priest František Moško and a small group of volunteers who help feed the migrants at the tent town. They rotate shifts with three other organisations and parishes.

A few days after the tent town went up, the priest published a post online in which he pleaded with local people not to believe the disinformation that politicians were spreading about migrants and seek the truth about Islam and Muslims by themselves.

He also pointed to a double standard when it comes to the perception of people’s tragedies.

“I think it is a big contradiction to be moved by the horrors and victims of the Holocaust, to condemn Putin’s regime while looking at the bodies of dead civilians in the media, and at the same time to scold migrants and refugees from war-torn Syria.”

Today, he describes the situation in Kúty as “peaceful”, claiming that some people might be coming to terms with the fact that migrants are staying in their town temporarily.

A case in point, at the small grocery store next to the camp, where many migrants often spend their little money, cashiers have already got used to migrants after overcoming initial their fears in recent weeks.

“They haven’t done anything bad – they’re harmless,” one of the female cashiers said.

The Interior Ministry has not indicated when Kúty’s tent town will be taken down, only saying that if the number of illegal migrants falls over the winter, then its closure would be on the table. 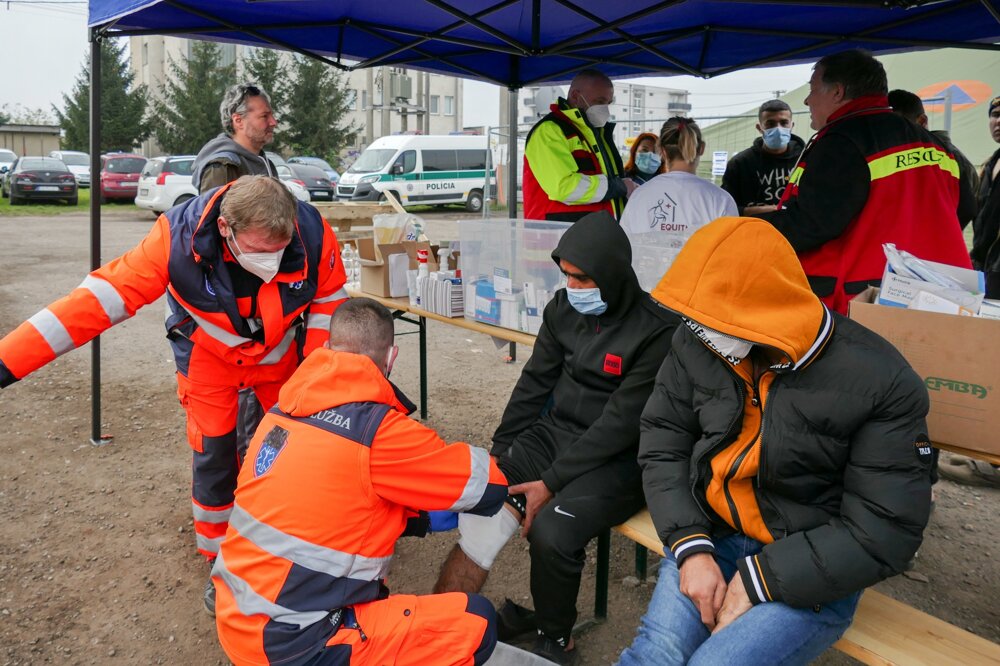 Seven years after the 2015 migrant crisis in Europe – which Slovakia largely avoided even though the issue was politically exploited by far-right politicians and the then-prime minister Robert Fico – the country is reliving those times.

Fico, whose Smer party is now in opposition, made some anti-migration comments at a press conference in early November, and Marian Kotleba of the far-right ĽSNS party managed to lure a large crowd of people to Kúty in mid-November to protest near the camp against the presence of the migrants. There, he announced the formation of a People’s Border Guard and accused Interior Minister Roman Mikulec of the ruling OĽaNO party of inaction and lying.

Earlier in November, General Prosecutor Maroš Žilinka announced he would look into whether public officials had committed a crime by failing to protect the Slovak border with Hungary and exposing Slovakia to irregular migration. He has not provided any names or further details since then.

Nevertheless, due to the migration situation, the interior minister faced yet another (his seventh in total) parliamentary vote of no confidence on December 1. Despite winning the vote, dissatisfaction with the minister is clearly growing. Up to 71 lawmakers supported the vote last week, the highest number since the first vote of no confidence against Mikulec and short of only five votes needed to get rid of him.

Mikulec is blamed by the opposition for the reintroduction of temporary border controls by Austria and the Czech Republic in September, after his ministry and the police failed to stop increasing numbers of migrants from crossing the 665-kilometre border into Slovakia from Hungary. As a consequence, migrants are stuck in Slovakia because Hungary is refusing to take them back, while Czechia hands back any migrants to Slovakia after failed attempts to cross into their territory. Most migrants don’t want to stay in the Czech Republic, but want to continue on their journey to countries such as Germany and Austria.

The minister, who has admitted on several occasions that Slovakia has no capacity to protect its long border with Hungary, argues the Slovak police have not failed and points to the drafting of the Schengen Borders Code – a document that only allows the reintroduction of internal border controls in the Schengen Area in the case of a threat to internal security.

“Migration and the crossing of the EU’s external borders by a large number of third-country nationals should not, per se, be considered to be a threat to public policy or internal security,” the document reads.

Moreover, Mikulec often points out that the reimposition of internal border checks does not actually tackle the problem of irregular migration, but merely dumps the problem on Slovakia’s doorstep. Any solution, therefore, must come at an EU level.

“If someone thinks that by introducing border controls with Hungary, migrants will miraculously disappear from Slovakia, they are wrong or do not understand the issue of illegal migration,” he said, adding that what is key is protecting the EU’s external border better and making changes to the EU’s asylum policy.

Thus far, the European Commission has only presented 20 measures on how to reduce migration on the so-called Central Mediterranean migrant route, not the Western Balkans route. Despite this, Slovakia sent 40 police officers to help protect the EU’s external border with Serbia in Hungary, while other Slovak police officers have formed mixed teams with Hungarian colleagues to patrol the Slovak-Hungarian border.

From late September until November 15, the Slovak police detained 4,466 illegal migrants and 63 smugglers.

Despite the better-protected external border and police patrols on the Slovak-Hungarian border, Mohammad Alshami, a 25-year-old political science graduate from the Syrian city of Homs, still managed to reach Kúty after a long time spent in Turkey.

He said he wanted to reunite with his sister living in Munich, Germany, who does not know about his arrival.

“A surprise it will be,” he told The Slovak Spectator, claiming his brother will embark on the same journey in the coming weeks.