D1/D4 highway intersection will be built, but five years late

Someone forgot to include the new highway's main junction. The costs and delays continue to mount. 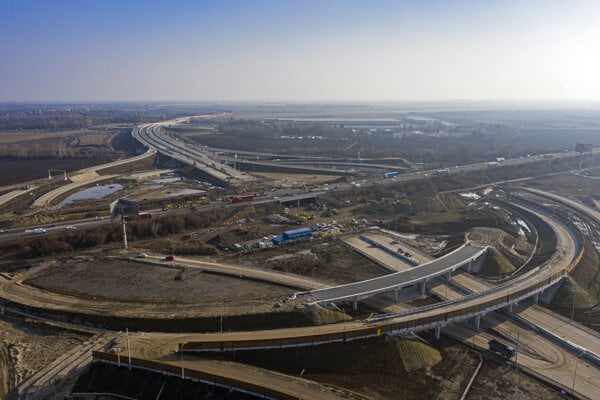 When the D4/R7 ringroad around Bratislava was opened last year drivers were dismayed, to say the least, to discover that it was not possible to join it from the D1, Slovakia's main highway, as it enters Bratislava. In what seems to have been an Olympic-level cock-up, no one had thought to include an intersection in the plans, meaning that the builders left the approach ramps and feeder roads unfinished. The result is visible from space. Without the interconnection, the multi-billion-euro project, which included construction of a new bridge over the Danube, has been rendered partially redundant.

After a year of negotiations, the Transport Ministry has now, finally, announced that a solution has been found to connect the two highways, the Index business magazine reports. Polish construction company Budimex will build the D1/D4 junction in the direction of Bratislava's Pristavny Most bridge. The contract, signed by the National Highway Company (NDS) with Budimex, is worth €110 million.

However, Transport Minister Andrej Doležal (a Sme Rodina nominee), who previously dubbed the missing junction a fiasco and a mess, says drivers should not expect the construction to start immediately.

"Do not expect bulldozers and excavators there tomorrow," the minister said, as quoted by Index.

How the works are planned

The plan is to transfer the traffic from the current highway to detour routes along branches of the future D1/D4 junction.

During the work on the D1/D4 junction within the D1 extension, traffic will be redirected from the D1 to these detour routes. Since traffic here will be organised in only two lanes, jams are expected.

Doležal says he wants to offer a discounted train and city transport ticket, and promises to discuss the possibility with the Bratislava Self-Governing Region, which oversees public transport in the region.

Whether the deadlines are met depends mainly on how Budimex manages to organise the construction. It is a newcomer in Slovakia, so does not have an existing network of subcontractors in the country, Index noted. At the same time, the company will want the project to be a success in order to help it with tenders for other state orders.

The NDS will inform about progress on the construction site and the traffic situation in its vicinity on the website www.d1d4.sk. The project should be completed within 1,100 days (i.e. 3 years) of the start of construction, so some time in 2025.

The D1 and D4 should be connected first in the direction from Jarovce to Trnava and from Trnava to Rača in the fall of 2024. The remaining two directions should be available in the spring of the following year.