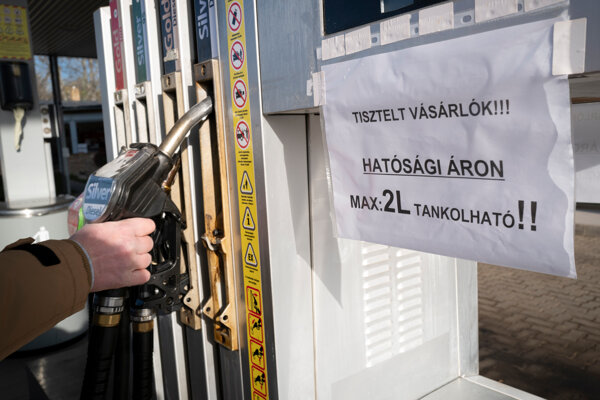 A view of a sign on a fuel pump at a petrol station reading 'Dear Costumers! You can purchase only 2 litres of fuel at the regulated price!' in Martonvasar, Hungary, on December 1, 2022. (Source: AP Photo - Bela Szandelszky)
Font size:A-|A+  Comments disabled

Hungary’s government scrapped a cap on fuel prices last night after its plan to shield people from inflation failed and the country struggled with fuel shortages.

After the cap was introduced, long queues at petrol stations in Hungary had become a common sight as people rushed to buy up as much cheap fuel as they could.

As a result, many stations had to introduce limits on petrol purchases or close, the Sme daily wrote.

Officials at the Mol refinery in Hungary added the price cap had caused chaos, with a quarter of the firm’s petrol stations running out of fuel in the past few days.

This forced some Hungarians to cross the border into Slovakia to fill up their cars. And while some decided to queue up at petrol stations in Hungary after the decision to scrap the cap was announced, others continued to use stations in Slovak towns near the Hungarian border.

Following the end of the cap, experts have said that while there may still be problems with supply shortages, panic buying should not happen again.