Ruling politicians are choosing to ignore the warning signs. 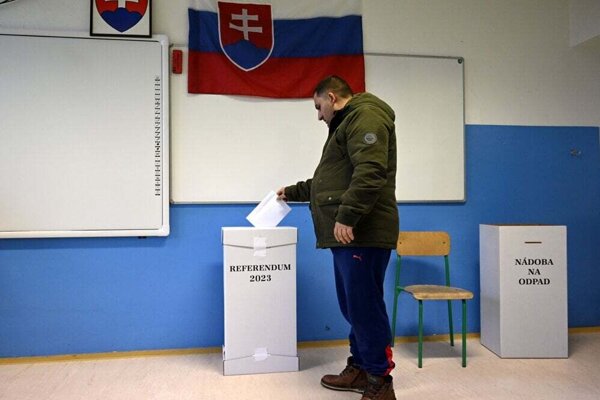 A man votes in the 2023 referendum in the eastern-Slovak town of Trebišov. (Source: TASR)
Font size:A-|A+  Comments disabled

Welcome to your weekly commentary and overview of news from Slovakia. The country is closer to a snap election despite the failed referendum. President Čaputová says she is tired but she retains hope that things can change for the better. And an American actor’s efforts to gain Slovak citizenship.

The referendum was invalid, but should not be inconsequential

When New Zealand’s prime minister, Jacinda Ardern, said last week that she would shortly step down from her top government post because she “no longer had enough in the tank”, we in Slovakia could only hope that our ruling politicians were watching, and listening.

But even if they were, they did not let it show. On Sunday evening, the former ruling coalition leaders (of OĽaNO, SaS and Za Ľudí) met at the Government Office to agree that a snap election should take place on September 30, and that parliament will take the necessary steps this week to make it happen.

It is still being called an early, or ‘snap’ election even though it will likely take place nearly 10 months after parliament voted out the government of Eduard Heger, and only five months before the current term is due to end anyway. It turns out that Jacinda Ardern’s example is not the only thing they are opting to ignore: they are also choosing to disregard – or wilfully misinterpret – the result of the referendum that took place in Slovakia just this Saturday.

The referendum, initiated by opposition parties Smer, Hlas and Republika, brought just 27.25 percent of all eligible voters in Slovakia to the polling stations, the vast majority of whom answered ‘yes’ to the question formulated by Smer. That asked, in effect, if a vote by parliament or a referendum should be enough to trigger a general election. Since a popular turnout of at least 50 percent is required for a referendum to be valid, this vote failed – but it is not irrelevant, and should not be inconsequential.