Defence Minister Jozef Stank took exception to a journalist's question about his style of "commanding" his ministry. "I have a problem with that word," he objected. "The four of us here" - he indicated the two deputy defence ministers and Slovak armed forces head Milan Cerovský who flanked him at the February 15 press conference - "the four of us are sitting here today as the management team of this ministry. I don't 'command' anything."
Stank's reaction to his questioner was freighted with significance. Since taking over the ministry on January 2, the former Slovak ambassador to the Czech Republic has quietly ushered in a new approach to management and personnel issues. 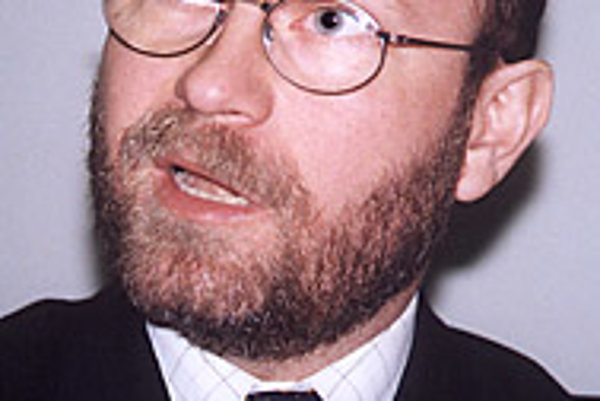 Defence Minister Jozef Stank took exception to a journalist's question about his style of "commanding" his ministry. "I have a problem with that word," he objected. "The four of us here" - he indicated the two deputy defence ministers and Slovak armed forces head Milan Cerovský who flanked him at the February 15 press conference - "the four of us are sitting here today as the management team of this ministry. I don't 'command' anything."

Stank's reaction to his questioner was freighted with significance. Since taking over the ministry on January 2, the former Slovak ambassador to the Czech Republic has quietly ushered in a new approach to management and personnel issues.

The appointment of Rastislav Káčer, who from 1992 until the beginning of February 2001 worked in the Foreign Ministry, to the post of deputy defence minister a week ago, has signalled a new orientation in the defence sector towards professional diplomats rather than career soldiers in leadership positions. The switch has been seen as vital to Slovakia's further progress towards NATO membership.

"If you look at the defence ministries of NATO member countries, you often find that the people in high positions have a diplomatic and security background," said Káčer in a February 15 interview with The Slovak Spectator. "This [the fact that both Káčer and Stank have diplomatic backgrounds] doesn't signify a conceptual change, but more a change in style from the minister's predecessor [Pavol Kanis], in that we wanted to subdue the perception of the Defence Ministry as part of the army. Sometimes, those [at the ministry] with deep Warsaw Pact training had problems differentiating between 'defence' and 'military'. Defence is a much larger concept. We would like to shape our ministry along the lines of those of Alliance member states."

More than nuts and bolts

As important as the new style is, however, it was the substance of Slovak defence-sector changes which interested a NATO inspection team visiting Slovakia from February 11 to 15. Led by Klaus Peter Klaiber, NATO's deputy general secretary, the team was here to take up the five main areas of Slovakia's preparation for membership in the alliance: politics and economics, defence and military questions, funding, security and legal issues. The results of the visit will shape the Progress Report which will be delivered at the April 20 summit between NATO and Slovakia in Brussels.

Klaiber, at a February 14 press conference, singled out as key the passage of a constitutional amendment allowing NATO membership, the adoption of laws to protect information, and "that a convincing national security strategy be adopted... A lot has to be done, but I detect that a lot can be done in Slovakia to be well prepared for the moment when the NATO alliance will review the membership process."

To be sure, NATO has other bones to pick with Slovakia over concrete issues, many of which were spelled out in last year's highly critical Garrett Report on the Slovak military, prepared under US General Joseph Garrett. The report found fault with Slovakia's basic security documents, many of which were outdated or irrelevant; with planning and distribution of resources, particularly financial; with the poor training and combat-readiness of Slovak forces; and with the fact that in the army, "signs exist of serious problems in personal areas of competence, and the way in which areas of responsibility are defined".

According to a study published last year by the Institute for Public Affairs (IVO) think tank (see sidebar, this page), the Garrett Report meant by this last phrase that "the Army... still operates according to principles inherited from the communist regime."

Did that mean that former Defence Minister Pavol Kanis, a former communist and member of the Marxist-Leninist Institute who resigned his government post after a financial scandal December 16, 2000, had been a personal barrier for NATO?

"That's a very tough question," said Káčer after a long pause. "It's very tough, very political... I don't think that Kanis was driven by bad intentions. He was honestly committed to Slovakia's integration to NATO. But it is a question of this institution being as effective as possible given its limitations. We have some heritage, and it's not just an Army heritage, it's one affecting our entire society. You can't erase 40 or 50 years in a matter of days."

IVO defence sector specialist Pavol Lukáč explained that the Defence Ministry's 'personnel problem' was more than one of former communists in its ranks: "One of the biggest problems in the past was that key people in the Defence Ministry were generals," he said. "In the past, many of these generals were not prepared to communicate at the highest levels with people in Brussels."

On February 14, two army generals with important positions in the Defence Ministry - Ľudovít Gál, head of integration and foreign relations, and Milan Straňava, director of the section of defence policy and planning - submitted theur resignations. Lukáč termed the event another major sign of welcome change.

"The first positive move we've seen following Káčer's appointment is that the two generals have been kicked out," he said. " There is certainly a change of style away from this command philosophy to one of management, and the appointment of Mr. Káčer is proof of this. It will improve Slovakia's NATO chances because he is one of the best diplomats in Slovakia, and has already served four years in Brussels."

Not that anyone on the Slovak side believes personnel changes can compensate for failing to implement reforms. Slovakia is committed to carrying out 64 concrete tasks under the Membership Action Plan it signed with NATO in 1999, tasks whose deadlines range from 2002 to 2006.

But for Minister Stank, Slovakia could gain NATO membership at next year's Prague summit even if many of the required tasks have not been carried out: "the important thing is that we show we're on a train we can't get off", he said.

Káčer, too, felt that the 2002 summit, which was likely to happen in the fall, was a realistic date for Slovakia to entertain as a membership target. As he explained, despite the long 'shopping list' of tasks which Slovakia still faced, "the decision of NATO to expand or not will be primarily a political one, rather than a technical matter."

In other words, added Lukáč, even if Slovakia proved itself a model candidate before 2002, this would be for naught if NATO members could not be convinced of the political advantages of bringing Slovakia on board; hence the need for experienced diplomats - and convincing advocates - such as Káčer.