Autumn is the busiest time of year for producers of domáca (home-made) hard alcohol in Slovakia. Busy at work in their basements or workshops, the nation's countless home-producers turn the summer's plums, apples and cherries into fiery liquids with enough alcoholic power to drive even the strongest of men to their knees.
Ján D. knows all about the domáca spirits. He works at a pálenica, or distillery, in Velčice, a small village near Zlaté Moravce in western Slovakia. Locals bring him fruit which they have gathered in wooden barrels, mashed (if they are apples or pears) and then left to ferment for four to five weeks. At the pálenica, the fruit is then boiled in two different large stills, resulting in what Ján called "real spirits", which are often 120 proof (about 60% alcohol by volume). 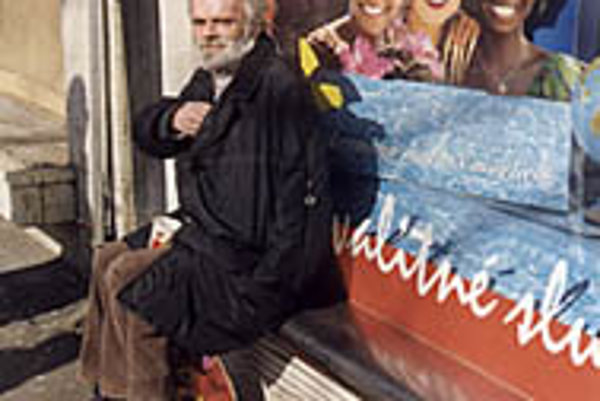 Font size:A-|A+  Comments disabled
Autumn is the busiest time of year for producers of domáca (home-made) hard alcohol in Slovakia. Busy at work in their basements or workshops, the nation's countless home-producers turn the summer's plums, apples and cherries into fiery liquids with enough alcoholic power to drive even the strongest of men to their knees.

Ján D. knows all about the domáca spirits. He works at a pálenica, or distillery, in Velčice, a small village near Zlaté Moravce in western Slovakia. Locals bring him fruit which they have gathered in wooden barrels, mashed (if they are apples or pears) and then left to ferment for four to five weeks. At the pálenica, the fruit is then boiled in two different large stills, resulting in what Ján called "real spirits", which are often 120 proof (about 60% alcohol by volume).

"Not only is it cheaper than alcohol from the store, but it's also a part of our Slovak tradition," Ján said. "The domáca alcohol has been here for centuries and the recipes have been inherited throughout the generations, passed from fathers to sons."

More than just Slovak tradition, he said, serving home-made alcohol is also a sign of respect. "It's a show of appreciation if you serve your guests genuine slivovica (plum brandy), or hruškovica (pear brandy)," he said, adding that his pálenica also produced jablkovica (apple brandy), čerešňovica (cherry brandy), and marhuľovica (apricot brandy).

"We have plenty of customers," he continued. "Locals come here with fruit they collect in their gardens. They have us produce for them a few litres of domáca that they then serve at important family occasions, weddings or on New Year's Eve."

Indeed, any foreigner who has spent significant time in Slovakia has surely tasted the stiff home-made concoctions as their hosts eye them with keen interest and pleasure. Domáca Slivovica, Slovaks are fond of saying, 'makes men tough and friendships stronger', and is always on hand at festive occasions throughout the country.

But drinking in Slovakia has two faces. Besides the camraderie of sharing a shot and the pride in honouring old traditions, there is also a dark side. Slovaks like their drink, sometimes too much so for their physical and mental health.

"In terms of drinking hard alcohol in Europe, Slovakia ranks in the top one third with 7.9 litres of pure alcohol annually consumed per capita," said Alojz Nociar from the Governmental committee for drug dependencies and drug control, noting that the French led the way with 13 litres per capita. Each of Slovakia's 5.4 million citizens also consumes 170 half-litre beers and 21 bottles of wine per year (with some, clearly, drinking more than others).

High alcohol consumption is closely linked to widespread social acceptance of drinking, making for a lethal combination, said Ivan Novotný, head of the dependency rehab centre AT Sanatorium in Bratislava. For the country's 120,000 alcoholics, social attitudes mean they not only have to fight their own disease, but that they cannot count on understanding or support from their countrymen.

A look around AT's waiting room offers a stark view of the human carnage left by alcohol. Two stringy-haired women and four sweating men fidget as they seek encouragement from the doctor for their recent decision to stop drinking. A middle aged man bends over his knees covering his pale face with shaking hands. A retired woman stares blankly at the wall while slowly swaying back and forth in her seat.

According to Novotný, these people have been victimised by Slovakia's national tolerance for excessive drinking. "If you don't drink in Slovakia you are considered to be a weirdo, a stranger," he said. "Slovaks generally have a high tolerance for alcohol abuse, but as soon as you publicly admit that you have a problem and are in treatment, people's positive feelings for you quickly change to negative."

Iva Kuceková, a sociologist and psychologist from the Predná Hora treatment centre for dependencies, added that Slovakia's indulgent attitude towards alcohol consumption was evidenced in the fact that under-age youths were rarely refused a drink.

"Although the law prohibits the sale of alcoholic drinks to under-aged kids [18 is the legal drinking age], this is not observed by bartenders at all, and nobody protests against this," she said. "And then when someone becomes an alcoholic, society suddenly turns their back on this person."

Nociar said that the plight of alcoholics had been overlooked as society focused more on combatting drug addiction amongst its youth. While drug addicts are on average half the age of alcoholics (24 years versus 42 for the average alcoholic), he said, the country should start focusing more on teaching younger generations to avoid alcohol.

"The priority has been given to camapigning against drug use," Nociar said. "So unfortunately, not enough attention is at the moment being given to the problem of alcoholism."

Teenagers themselves say that drinking is common at an early age. "I sometimes drink wine at parties," said Zuzana L, a 16-year old secondary school student from Bratislava. "I usually drink a half litre, which is not much compared to some of my school mates. I think it's better than doing drugs."

But even worse than common ignorance of the damage alcohol can cause, say doctors, is the fact that drinking is positively glorified by people with power to shape social attitudes.

"Slovak society sets a bad example because we tolerate the drunkenness of politicians," said Predná Hora's Kuceková, citing cases of public drunkenness over the past year and a half by former far-right Slovak National Party boss Ján Slota and several ruling coalition officials who appeared intoxicated when interviewed for television.

Novotný said that such widespread acceptance and even promotion of excessive drinking in Slovakia made statistics unreliable: while the number of registered alcoholics has slightly decreased since 1989, he said that a drop-off had not actually occurred, but rather that many alcoholics now declined treatment.

Novotný, whose clinic treats around 1,400 alcoholics in the capital city, said that Slovak alcholics came from all walks of life - "from simple people to politicians". The danger, he added, stemmed from the fact that in Slovakia alcohol was treated as a "friendship liquid", and that much of the country was ignorant of the destructive dangers of alcohol dependency.

"You serve alcohol to people you like and who you want to get friendly with," he said. "It's also very usual that we [Slovaks] reward ourselves and our friends with alcohol. For example, here it's a normal birthday present."

But Novotný warned that the country should quit underestimating the problem. "I remember my youngest alcoholic patient was a girl of 14, and the youngest drug addict was just 12," he said.

"We have to keep in mind that although there are generalizations about 'at risk' categories, alcoholism - just like any other addiction - knows no borders. People who say 'it can't happen to me' may soon turn out to be very wrong, especially in a society which treats alcohol as part of its culture."