German supermodel Claudia Schiffer visited Slovakia last September to cut the ribbon on a new stretch of highway. The visit was probably her last - funding cuts and sober planning will reduce the pace of Slovak highway construction to a crawl over the next fifteen years.
The highway construction programme launched by former Prime Minister Vladimír Mečiar in 1996 sought to create two new freeways across the country - one running north-south, between Poland and Bratislava, and one east-west linking the Czech Republic and the Ukraine. At a total cost of 229 billion Slovak crowns ($5.5 billion), the project was to add 400 kilometers of new roads and to be finished by the year 2005. 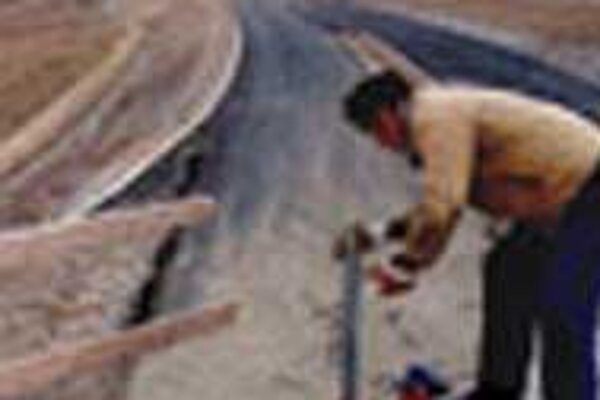 Font size:A-|A+  Comments disabled
German supermodel Claudia Schiffer visited Slovakia last September to cut the ribbon on a new stretch of highway. The visit was probably her last - funding cuts and sober planning will reduce the pace of Slovak highway construction to a crawl over the next fifteen years.

The highway construction programme launched by former Prime Minister Vladimír Mečiar in 1996 sought to create two new freeways across the country - one running north-south, between Poland and Bratislava, and one east-west linking the Czech Republic and the Ukraine. At a total cost of 229 billion Slovak crowns ($5.5 billion), the project was to add 400 kilometers of new roads and to be finished by the year 2005.

Since securing power in last year's elections, however, the new government of Prime Minister Mikuláš Dzurinda has dedicated itself to reducing fiscal spending. Last year's fiscal deficit of 19.2 billion Slovak crowns ($460 million) represented 5% of gross domestic product (GDP); the target set in the 1999 state budget is 15 billion crowns, or less than 2% of GDP.

In this environment of fiscal austerity, expenditures have been slashed on every state project, including motorway construction. The State Fund for Road Economy, which administers the state road transport system, will see a cutback in overall funding for 1999 of around 5% against 1998.

More significantly, Transport Minister Gabriel Palacka announced at a March 23 press conference that the bank loans secured for new highway construction would drop to 6.7 billion crowns this year, down 21% from 1998 and almost 50% from 1997.

Lamenting the loss of funds, government officials and economic analysts have pinned the blame squarely on the reckless spending and ill-conceived financing of road contruction under the Mečiar government.

"The former government practiced some very non-standard methods of financing," said Peter Barek, General Director of the Road Infrastructure Section at the Transport Ministry. "As a result, everyone has had to suffer cuts."

Barek said that the government still believed in the importance of continuing motorway construction, but added that the previous government had committed two grave financing mistakes that now hamper the road construction programme.

The first gaffe, Barek said, was the former government's decision to use short-term loans to build long-term infrastructure projects. According to Barek, the interest rates on these short-term loans were exorbitant, while the principals had to be repaid before all the planned projects could be finished.

Martin Kábat, a stock analyst for Slávia Capital brokers in Bratislava, agreed that the choice of loans had been far from shrewd. "The former government financed in the short term, and now the state cannot afford to pay the high loan instalments every year. The state budget is already in deficit, and the average interest rate on those loans is 24% with some rates as high as 30%."

Barek explained that the Mečiar government had had little choice but to accept such unfavourable loan terms because their inefficient approach to road construction in general did not win the confidence of investors.

"There were 47 different projects covering some 680 kilometres [of new roads], but the former government... classified it all as one project," Barek said. "They wanted more money every year to continue, but they started so many sections at so many different sites that it just didn't work. [The overall project] was too unclear, too inefficient."

Valerian Horváth, the Director of the Division of Investment Preparations for the Slovak Road Administration, agreed that the former government's refusal to classify different highway sections as different projects had contributed to the high interest rates. According to Horváth, the grandiose nature of the highway programme created ambiguity at the level of individual projects - hence the higher interest rates. "It's easier to get better rates on smaller, more specific projects," he said.

Although the current government has decided to forge ahead with highway construction, the strategy of its predecessor may have caused irreparable damage to the country's construction firms. Many of the companies contracted to build the motorways at massive expense have still not been paid by the state, and have begun to fall apart as a result.

Dušan Šamudovský, Director of Construction for Dopravoproject, one of the largest Slovak construction firms, said that his company had been forced to lay workers off while it waited for the 100 million crowns that the government still owed it for previous projects.

"Construction companies are the ones most affected by [the debts] - people have already lost jobs," Šamudovský said. "I hope that the government budgets a sufficient amount of money because, first, we still need to be paid and, second, we still need to continue the projects."

The Ministry's Barek said he empathised with the plight of construction firms, and promised that the ministry would tackle the problem as soon as it could.

"[The former government] started some [highway sections] without any money, and this created fights between the contractors and the government," Barek said. "Now, we want to find a solution to that problem. In order to have the appropriate cash flow to begin more projects, we will try to take out a loan to cover the outstanding debts we owe to the contractors."

When in opposition from 1994 to 1998, the parties of the current government heavily criticised the Mečiar administration for what they deemed as excessive expenditures on motorway construction. State officials now say, however, that their criticisms were misinterpreted; far from wanting to abandon the motorway projects, they insist, they would like nothing more than to continue.

"We were never against the new motorways," the Ministry's Barek said. "We were against how they were being funded. Now we want to continue the projects [because] they are in line with our EU aspirations, and they are highly important for the framework of the Visegrad 4 [a regional pact between Slovakia, Hungary, Poland and the Czech Republic]."

Although the new government's ambitions may be high, funds remain low. Barek explained that the aim of creating a modern European highway network in Slovakia would have to be tempered by fiscal responsibility and regulated by GDP growth. In line with this thinking, highway completion dates set by the former government have already been postponed.

"The plan to finish the Slovak highway network by 2005 was a pie in the sky," Transport Minister Palacka said, adding that the ministry had pushed the completion date back to 2015.

Slávia Capital's Kábat called the delay a wise move, saying that the government's priority of decreasing the fiscal deficit was more important than its dream of finishing road construction. "The state has to pay back the debts [it amassed for previous road construction], and it cannot hide from the deficit," he said. "What they should do is pay off the current loans and try to secure longer term loans in the future."