Review: A poor tale of Slovakia's complicity with the Nazis

ACCORDING to a new illustrated book by Mark W.A. Axworthy, this is how Germany drew Slovakia into the second world war:
At the end of the 1930s Hitler was gearing up his war machine and building strategic alliances in his attempt to dominate Europe.
Controlling the Slovak part of Czechoslovakia seemed an ideal way for the fürher to achieve his goal of defeating the Allies: If Czechoslovakia could be broken in two, and the weaker Slovak half befriended by the Nazis, Hitler would have fewer problems invading Poland and the Soviet Union. 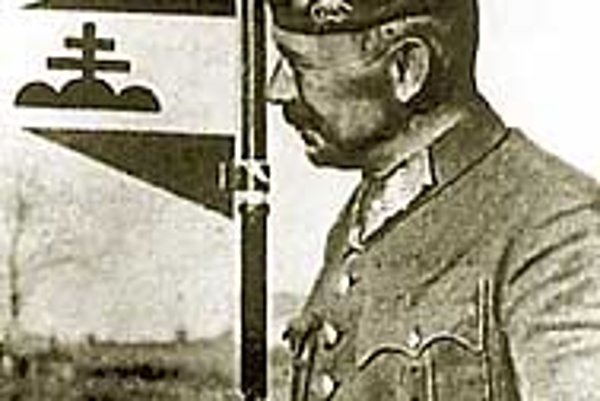 
ACCORDING to a new illustrated book by Mark W.A. Axworthy, this is how Germany drew Slovakia into the second world war:

At the end of the 1930s Hitler was gearing up his war machine and building strategic alliances in his attempt to dominate Europe.

Controlling the Slovak part of Czechoslovakia seemed an ideal way for the fürher to achieve his goal of defeating the Allies: If Czechoslovakia could be broken in two, and the weaker Slovak half befriended by the Nazis, Hitler would have fewer problems invading Poland and the Soviet Union.

So it was that near the beginning of the war, Germany engineered the break up of Czechoslovakia, writes Axworthy. Since most of the leadership of the Czechoslovak military had been Czech, and not Slovak, an independent Slovakia was left with a weakened military devoid of leadership.

On March 13, 1938, Hitler demanded Slovakia declare its independence and accept German protection or he would allow Hungary - which had been massing troops on Slovakia's southern border at Hitler's encouragement - to invade and retake territory it had lost at the end of the first world war. The Slovak Diet (commonly known as the Slovak National Council) unanimously voted for independence on March 14 and the next day accepted an offer of protection from Germany that led to six years of collaboration in the invasions of Poland and the Soviet Union and in the near-complete extermination of Slovakia's Jewish population.

The book Axis Slovakia: Hitler's Slavic Wedge 1938-1945 tells the story of the breakup of Czechoslovakia, German domination of Slovakia, Slovakia's cooperation with Germany during the war, the failed 1944 national uprising against the Nazis and finally what the author calls "the extinction of the Slovak state". But if you are looking for the definitive history of Slovakia's WW2 involvement you should probably look elsewhere.

Axworthy is an author of unknown qualifications. There is no bio that documents his academic, military or authorial experience or a background in Slovak history anywhere in the book, and an Internet search brought up nothing about the author's background. The search did however reveal that an author by the name of Mark Axworthy (without the initials W. A.) wrote two books about Romania's army in the second world war.

The dust jacket claims "extensive source study". However, no evidence of this is given. The glaring absence of source citation within the text and the lack of a bibliography, two things that are often required when writing even the most basic high school research paper, seriously undermine the book's credibility.

Pronouncements such as the following description on page 109 of losses suffered by the Slovak Rapid Brigade in the battle of Lipovec further chip away at the authority of the text: "There is some confusion about Slovak casualties, but it is most likely that 75 men were killed, 167 wounded and 17 captured." Why is it most likely? Because Axworthy says so?

Despite the dubious nature of the scholarship, Axworthy's writing is, at times, pretty good and does manage to keep the reader's attention. The author is at his best when he is explaining the politics of Slovakia's involvement in the war, and does an admirable job relating Slovak complicity in the deportation and extermination of most of the country's Jewish population. It is horrifying to learn that the Slovak government paid 500 reichsmarks for the "relocation and resettlement" of each Jew.

A key component of the book is the inclusion of maps depicting the progression of various campaigns and battles, charts that show troop strengths and various other data relating to Slovak involvement in the war. However, here again the book falls short, as no attempt was made to put together a comprehensive index that would help readers locate them within the text. Moreover, the editor did not feel it necessary to mention any of the sources of the maps or charts.

Axis Slovakia's major success is in showing us what Slovakia's armed forces actually looked like, through hundreds of photographs generously scattered throughout the text. Having collected them from the Museum of the National Uprising in Banská Bystrica, the Museum of Modern History in Lubljiana, the Czech Museum in Prague and Germany's Bundesarchiv, Axworthy has done a commendable job compiling into one volume a comprehensive resource of period photographs for the second-world-war buff to thumb through while enjoying a brandy and a cigar.

But he'd better have a lot of liqueur and a long stogie, as he could spend hours looking for the colour-uniform plates promised by the publisher's website and the book's dust jacket. They are not there.