SLOVAK political leaders have applauded the February 28 election of former Czech prime minister Václav Klaus as president of the Czech Republic, heralding a new era of enhanced relations between the two countries.
Members of the Czech House of Representatives and Senate elected Klaus as the most appropriate candidate for president in the third round of the third election since the beginning of January.
Slovakia's top three political figures - President Rudolf Schuster, Prime Minister Mikuláš Dzurinda, and Speaker of Parliament Pavol Hrušovský - congratulated Klaus on his election, and expressed their belief that Klaus will help to further deepen the already "outstanding" relationship between the two countries. 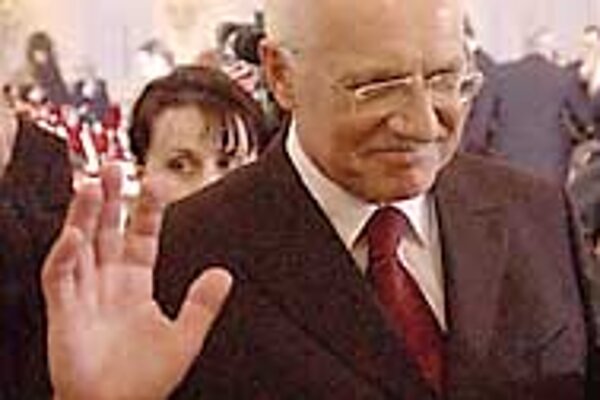 Members of the Czech House of Representatives and Senate elected Klaus as the most appropriate candidate for president in the third round of the third election since the beginning of January.

The reactions from other coalition politicians were similar, leading analysts to note that Klaus appealed to politicians of all stripes, largely because of his track record. As Czech prime minister from 1992 to 1997, Klaus was instrumental in the division of Czechoslovakia (see article: Who is Václav Klaus?).

"I did not notice any particular inclinations in any Slovak party. They all congratulated Klaus," said head of the Bratislava-based Institute for Public Affairs think tank Grigorij Mesežnikov.

Although Klaus is known for his right-leaning politics, even the left-wing opposition party Smer welcomed the election results.

"I always admired the straightforwardness of Klaus and his incredible degree of Eurorealism, with which he was able to react to the integration processes and national interests of the Czech Republic," said Smer leader Robert Fico.

But despite considerable support in neighbouring Slovakia, the new Czech president now faces the difficult task of filling the shoes of former Czech president Václav Havel, well known abroad and popular at home. Havel took office as the first elected president of Czechoslovakia in December 1989, and no one else has served in the position since.

In the Czech Republic, the president is the official head of state, but as is the case in other central European countries, executive power rests with the government, leaving the president to fulfil more of a figurehead role. He does, however, have the authority to appoint judges and other top state officials, grant amnesties, and return laws to parliament.

Czech parliamentarians first tried to find Havel's successor on January 15. Klaus, who was the only person to stand in all the elections, and Speaker of the Senate Petr Pithart, were the most successful candidates that time around, but in the end both failed to gain the required majority.

The situation repeated itself on January 24, when former head of the United Nations Educational, Scientific, and Cultural Organisation (UNESCO) and current senator Jaroslava Moserová was Klaus's main challenger.

The final elections were also unpredictable. The ruling coalition, led by the Czech Social Democratic Party, declared support for philosopher Jan Sokol. However, Klaus managed to convince 142 legislators, just over half of the 200 MPs and 81 senators, that he was the right man for the job. Since the ruling coalition holds a majority, some of its members must have voted for Klaus in the secret ballot.

Havel's term in office ended on February 1 and the country was without a president from then until Klaus's swearing in, scheduled for March 7.

Slovakia was in a similar situation when in March 1998 the term of office of President Michal Kováč ended and parliament, controlled by a coalition led by Vladimír Mečiar's Movement for a Democratic Slovakia (HZDS), was unable to elect a new president because no candidate won a majority.

For Slovakia, the solution came after the parliamentary elections of September 1998, when the new ruling coalition approved a constitutional amendment that introduced direct presidential elections. Rudolf Schuster became Slovakia's first directly elected president in May 1999.

According to recent surveys, nearly 90 per cent of Czechs are also in favour of direct elections for president, and some analysts say they were close to getting them this time around.

"It was very close. There were indications that if parliament had failed to elect a president in the third election they would have opted for direct elections," said Mesežnikov.

"From what I know, there were fears that direct elections would open the door to populists, and those opinions were expressed by people who enjoy great authority in that society," he added.

However, the Czechs may yet decide to change the current election procedure, Mesežnikov said.

"I would not rule that out, especially if it looks like no one will get a clear majority before the next elections," he said.

Opinion polls show that the results of the recent vote would have been the same either way. According to a survey conducted by TNS Factum, 56 per cent of Czechs supported Klaus before the last round of elections. Similar results were shown by other polling agencies in the country.

Analysts say that among those to benefit most from the result is the Communist Party of Bohemia and Moravia (KSČM), which was the swing faction in the election.

Before the vote, Klaus promised to give the KSČM equal treatment in parliament, where it is currently isolated and excluded from decision-making roles. In return, he became "the lesser of two evils" in the eyes of KSČM representatives.

President Klaus has already announced that his first official visit will lead him to the last place President Havel visited, just days before leaving office - Slovakia.

Experts say that despite having limited power, the presidents of both the Czech and Slovak Republics are able to influence mutual relations.

"Their role is determined by various developments in the two countries. I think both countries are inclined to have above-standard relations, and the newly elected Czech president has declared his determination to further develop them," said Mesežnikov.