ON THE DAY the SDKÚ party leadership decided to abolish the 32 local party organisations making up the Bratislava region wing, The Slovak Spectator spoke with SDKÚ No. 2 Ivan Mikloš about the political and economic background to the party's internal dispute. Mikloš, in a relaxed mood at party headquarters, gave no indication of the radical step he and his colleagues were about to take against the rebel Bratislava group. 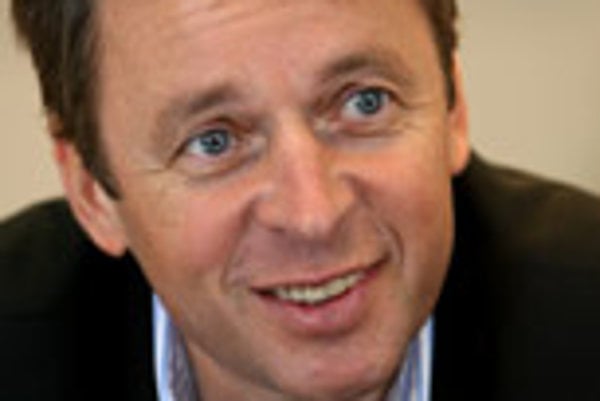 ON THE DAY the SDKÚ party leadership decided to abolish the 32 local party organisations making up the Bratislava region wing, The Slovak Spectator spoke with SDKÚ No. 2 Ivan Mikloš about the political and economic background to the party's internal dispute. Mikloš, in a relaxed mood at party headquarters, gave no indication of the radical step he and his colleagues were about to take against the rebel Bratislava group.

The Slovak Spectator (TSS): The head of the rebel Bratislava SDKÚ wing, Valentín Mikuš, told the TA3 all-news channel that the only time he had spoken to you in the last year was when you were trying to lobby him on behalf of lawyer Ernest Valko, to get him a contract with the Bratislava Transit Company. Is this fight between the SDKÚ leadership and its Bratislava wing just about business, and who has control of municipal companies?

Ivan Mikloš (IM): I was accused of lobbying for Ernest Valko so he could get some business, but the truth of the matter is that I intervened only because I had heard they had stolen his know-how, that he had come up with an idea for how to prosecute court cases against people caught riding for free on city transit, and they had taken his idea and sent him packing. I just wanted to put matters right.

So then I went to Mikuš, and told him that the work of Valko, a lawyer who had saved us from being banned in the 1998 elections, and who was generally a close partner for us, had been stolen and given to a lawyer close to [Prime Minister Robert] Fico and [Justice Minister Štefan] Harabin. He looked down his nose at me and said he had other information. I told him to check his information and then meet with Valko. A month later I met him again, and asked him what the outcome was. He said: "Valko isn't getting it". I asked him who was getting the job. "[Vladimír] Kán." And who decided that? "I did." That just illustrates how they work.

TSS: So if not money, what is this struggle all about?

IM: It's about the Bratislava SDKÚ wing as such. For years they have had a bad reputation [for corruption - ed. note]. We changed the regional leader whose name was most connected with these tactics, Roman Vavrík, but the tactics remained the same, and in some ways became even worse. It was a problem we didn't know how to deal with. Then another problem arose - Zahradník refused to take the Bratislava Transit Company out of the Union of Transporters, which is a pro-government employers' group with which Fico is trying to break the unity of employers against the government in general. That was just absurd - of the five-member board, three are members of the SDKÚ, so it is unacceptable for the company to collaborate with the government. The party's national council expressed its fundamental disapproval of Zahradník's intentions, but we were ignored. Then came this challenge [on March 13], this "The Time for Change Has Come" petition, which was a clear demonstration of power, a declaration that "we won't interfere with affairs at the national level if you stay out of our Bratislava affairs". They just didn't expect that our reaction would be so strong.

TSS: Do you have any evidence that the Smer party is behind this rebellion within the SDKÚ?

IM: No direct evidence, but many things point to it.

TSS: Isn't this just a case of the SDKÚ leadership using a convenient excuse to get rid of what it regarded as a problem child?

IM: No. They made two fundamental mistakes - cooperating with Fico, and issuing a provocative challenge. They paid the price.