THE STATE wants to jam its foot into the doors of bankrupt 'strategic' companies. But those who object to the state stepping across the threshold have been increasing in number ever since Slovakia’s parliament gave its quick approval to a new law on strategic companies prepared by Economy Minister Ľubomír Jahnátek. He has dubbed the bill an 'anti-crisis measure'. 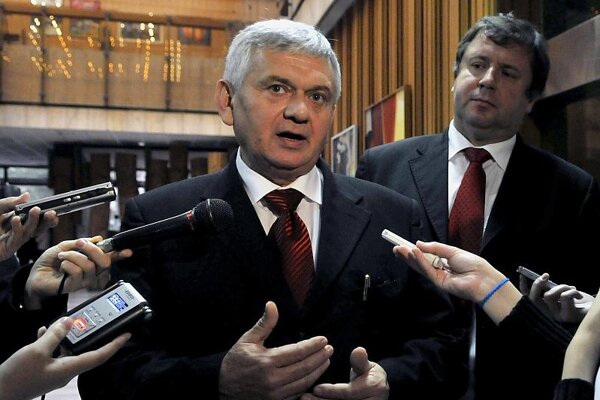 THE STATE wants to jam its foot into the doors of bankrupt 'strategic' companies. But those who object to the state stepping across the threshold have been increasing in number ever since Slovakia’s parliament gave its quick approval to a new law on strategic companies prepared by Economy Minister Ľubomír Jahnátek. He has dubbed the bill an 'anti-crisis measure'.

It is not just businesses that might in theory be deemed 'strategic' if they near bankruptcy which are questioning the wisdom of the law: the government’s social partners for tripartite discussion, made up of trade union and employer representatives, have both presented a list of objections. Slovakia’s Confederation of Trade Unions (KOZ) formally wrote to Slovak President Ivan Gašparovič asking him to veto the legislation on November 11.

Representatives of employers also said that if the president does not send the law back to parliament, they will ask a group of parliamentary deputies to challenge the legislation before the Constitutional Court.

The law, which parliament passed on November 5, authorises the state to buy bankrupt firms which the cabinet declares to be 'strategic' to the economy. Any firm employing more than 500 employees which is deemed important for the security of the state, protection of public health or operates within so-called network industries can be defined as strategic.

If such an enterprise files for bankruptcy the state will have a pre-emptive right to take over the company and later decide whether to pick new owners. The author of the law, Economy Minister Ľubomír Jahnátek, said that it would be valid only until the end of 2010.

This is already a watered down version of the legislation originally proposed, which would have opened the doors not only to state intervention in companies in bankruptcy but to any large enterprise which had financial difficulties, while also using what critics said was a very loose definition of what constituted a strategic company.

Prime Minister Robert Fico said on November 7 that his cabinet would keep its focus on strategic companies affected by the economic crisis and he did not rule out that some of these companies might need to remain in the hands of the state even after 2010, the SITA newswire reported. Fico said that the government’s priority is to preserve employment in these companies.

“The state can be a good owner,” Fico argued, referring to a heating plant in Košice which is solely owned by the state and, according to the prime minister, makes a profit every year.

“The law on strategic companies significantly worsens the business environment and brings uncertainty for domestic and foreign investors,” the Secretary of the National Association of Employers (RÚZ), Martin Hošták, told The Slovak Spectator. “The law, as passed, is unconstitutional and inserts uncertainty to bankruptcy processes, and many of its provisions are also impossible to execute.”

According to Hošták, the law passed by parliament included certain changes to the originally proposed legislation but its unconstitutional nature was not modified and has been preserved.

“We see a conflict with the constitution, mainly in the lack of clarity and in its limiting of ownership rights,” Hošták said. “The use of vague definitions and assigning duties with unclear content makes the unambiguous and predictable application of legal norms impossible. Bankruptcy proceedings will become more confusing and the position of trustees will weaken.”

The Association of Employer Unions (AZZZ) commented in a very similar vein about the confusion that the legislation might bring to bankruptcy proceedings.

“All this might result in greater caution by creditors, cutting the due dates of invoices, or eventually other measures taken by creditor banks, which might force even a company which functions in reality into bankruptcy,” AZZZ board member Rastislav Machunka told The Slovak Spectator. “Naturally, this is another blow to the business environment; an additional negative signal for investors who potentially could create new jobs and economic value for Slovakia.”

It is worth mentioning, Machunka said, that the law pertains to companies operating in the sectors of energy, water management and others where the price of these commodities are regulated by the state.

“Since we are in Slovakia and the political culture is Slovak as well, it might happen that if any of the companies are no longer liked politically for some reason, then the regulatory authority will set prices at a level so that the company will go bankrupt and subsequently be nationalised based on this law passed by parliament,” Machunka said.

According to Machunka, the law also allows the subsequent sale of these “nationalised” companies in the form of a public tender, which installs a kind of double track in the sale of companies and state property: one through the law on large privatisation and one through public tenders.

Machunka said that the declared goal in the law does have its rationale – to prevent endangerment of supplies of energy, heating and water, thus protecting both businesses and the public from this risk. However, he suggested that there are already laws which regulate businesses in the heating and energy industry and these are available to handle any problems that arise.


Machunka claims that the way in which this law was adopted has seriously damaged the process of social dialogue in Slovakia.

“It is an expression of arrogance of power [by the government] and disrespect towards its social partners.” Machunka said.

Hošták also considers the manner in which the law was adopted to be problematic. Parties concerned with this kind of legislation were not given a chance to comment on it, while discussion with the social partners was completely avoided, which, according to Hošták, violates the rules of Slovakia’s legislative process.

RÚZ hopes that President Gašparovič will not sign the law and will send it back to parliament. If the president signs the law, the AZZZ said it would request that parliamentary deputies challenge the legislation at the Constitutional Court.

The president of the Confederation of Trade Unions (KOZ), Miroslav Gazdík, sent a letter to President Gašparovič on November 11, 2009, asking him to not sign the law.

“The reason for this request is that the draft of the legislation did not go through interdepartmental review and the social partners were not given a chance to comment on its content within tripartite negotiations,” reads the letter provided to The Slovak Spectator by Otto Ewiak, spokesman for KOZ. “We consider it a violation of legislative rules and agreed-upon principles of social dialogue.”

Gazdík suggests in his letter that KOZ considers the intention of the government to solve problems of employment to be worthwhile but the confederation still views the law as problematic. If the president returns the law to parliament, it would give KOZ and business associations a chance to seek solutions which will improve the employment situation, not damage ownership rights and not contribute to uncertainty on the part of investors.

Minister Jahnátek has rejecting criticism of the legislation. When asked, he could not specify any particular company to which the law would apply at this point in time.

“This is not a law to search for companies that could have potential problems,” Jahnátek said, as quoted by SITA. “This is a law which enables the state to react when such a situation occurs.”

Regarding potential conflict with EU market and competition rules, Jahnátek said there were none. “We buy assets,” he told SITA. “We do not buy the company; we don’t provide a loan to this firm.”