WHEN it seemed like Mikuláš Dzurinda had withstood swirling pleas for changes within the party he founded a decade ago and was again firmly set to lead his party into Slovakia’s June elections, the chairman of the Slovak Democratic and Christian Union (SDKÚ) dropped a bombshell when he announced on February 2 that he was withdrawing his name from the party’s candidate list. 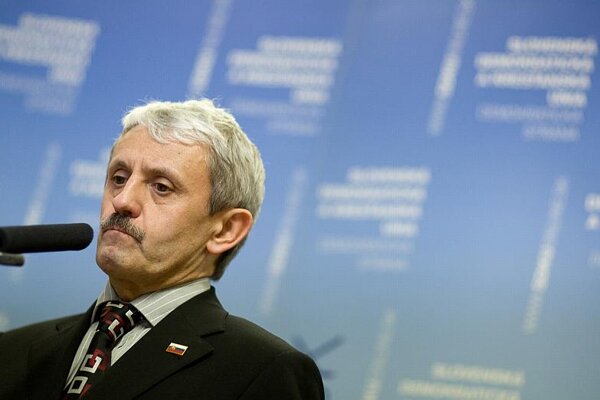 WHEN it seemed like Mikuláš Dzurinda had withstood swirling pleas for changes within the party he founded a decade ago and was again firmly set to lead his party into Slovakia’s June elections, the chairman of the Slovak Democratic and Christian Union (SDKÚ) dropped a bombshell when he announced on February 2 that he was withdrawing his name from the party’s candidate list.

Dzurinda’s decision is neither the result of serious self-reflection by SDKÚ’s leaders nor capitulation to demands made by the freshman Freedom and Solidarity (SaS) party which conditioned a pre-election alliance with SDKÚ, the strongest opposition party, to Dzurinda’s departure. Rather, Dzurinda’s ‘goodbye’ as a candidate is in response to Prime Minister Robert Fico re-awakening in mid January of slumbering questions about methods used by SDKÚ in the past to finance the party.

Dzurinda was quick to explain that his withdrawal as a candidate should not be interpreted as an admission of mistake or drawing of responsibility. He said that he wants to prevent Fico from focusing the pre-election campaign on SDKÚ’s past financing.

Fico claimed that SDKÚ is controlled by shell companies operating in tax havens and holding accounts in Swiss banks, while describing the financial operations of these companies as “money laundering”.

“This is not an issue of mistakes which I have additionally become aware of,” said Dzurinda, as quoted by the Sme daily. “As I said a week ago, no one is perfect and today we would have solved some of the issues differently.”

Dzurinda said that the deciding moment was when he realised that Fico was playing a “monstrous game” and that he does not want to permit Fico to escape responsibility for his time of rule in Slovakia by deflecting criticism to past actions by SDKÚ.

“These social democrats with watches worth Sk2 million want to judge us?” Dzurinda asked.

However, the reopening of questions about SDKÚ’s past financing paralysed the party for several days at the end of January. For example, top SDKÚ representatives missed the opportunity to shower blame on Interior Minister Robert Kaliňák for the Dublin explosive incident during a parliamentary no-confidence motion on January 29. The SDKÚ, instead, was involved in a 7-hour marathon, internal discussion to decide how to respond to the prime minister’s accusations. It is expected that SDKÚ will need to give some explanation about its financing details from the period between 2003 - 2005.

Dzurinda said he will remain party leader, hinting that the time is not ripe for him to quit politics. Political observers agree that Dzurinda’s departure from SDKÚ’s candidate list might bring some lost voters back to the party.

“It certainly was the main reason why the party leadership and Dzurinda opted for this move,” political scientist Miroslav Kusý told The Slovak Spectator. “Dzurinda was leading the ‘unpopularity charts’ in all the polls; it’s a known thing.”

However, according to Kusý, the main problem is that the party does not have a suitable replacement for Dzurinda.

“The basic problem is that SDKÚ has not been preparing other leading personalities; it is as though they assumed that Dzurinda would always be there and they tried to divert all the attacks on him,” said Kusý.

Radičová, SDKÚ’s candidate for the presidential palace in 2009, generated some enthusiasm among opposition voters in 2009 and said the support she received during her presidential campaign is driving her to consider a bid to lead the party.

“I have been asked about taking up the leadership since the presidential elections in May [2009]”, Radičová told the SITA newswire. “The support of people in that election is one of the reasons why I am considering taking this step.”

So far, however, no resounding support seems to have emerged from within the SDKÚ for her bid.

Juraj Marušiak, a political scientist with the Slovak Academy of Sciences told The Slovak Spectator that at the time when she ran in the presidential election, she did have the chance to challenge Dzurinda.

But Marušiak added that in the end Radičová, who lost to Ivan Gašparovič but had achieved a decent result with her million votes, then made a ‘senseless mistake’. It was this senseless mistake which culminated in Radičová giving up her parliamentary mandate.

Radičová resigned as MP on April 23, 2009 after having cast a vote two days earlier in parliament on behalf of her party colleague, Tatiana Rosová, during a vote on an opposition amendment to the Education Act.

“I made a mistake, a human failure that I feel incredibly sorry for,” Radičová said at the time, as quoted by the TASR newswire. “The only way to clear my name is to give up my deputy mandate.”

Regarding Mikloš, characterised by Kusý as Dzurinda’s right-hand man, the political scientist said that at the time when Mikloš was the chairman of the now defunct Democratic Party he did not break through as a party leader but he has shown himself to be a very capable economist and professional.

Mikloš has been associated with the country’s economic reforms undertaken by the previous governments of Dzurinda and observers say that he might enjoy a stronger level of support from within the party.

According to Kusý, Dzurinda – by stepping down as a candidate – did not completely divert attacks away from SDKÚ since the issue is not mainly about Dzurinda personally but about the party and its past financing.

“Fico skilfully diverted attention away from scandals of his government to an old and relatively small question about the SDKÚ,” Kusý said, adding that he thought the media was taken in by Fico’s move and started attacking Dzurinda.

Also coming on the same day as Dzurinda’s bombshell was an announcement from Jana Dubovcová – an uncompromising judge who in 2002 was awarded a Transparency International Integrity Award for fighting corruption – that she was giving up her judicial robe and joining SDKÚ.

Dubovcová had supported the “Red Light for Harabin” campaign organised by the Fair Play Alliance NGO to oppose the election of former justice minister Štefan Harabin to the presidency of Slovakia’s Supreme Court. She told Sme that if there would be a normal atmosphere in Slovakia’s judiciary she would have remained a judge.

“The only way to achieve change is to try to influence politics,” Dubovcová said in announcing her decision to join SDKÚ.

Meanwhile, Prime Minister Fico told the media that he still has more information to share about the past doings of SDKÚ .

“I have such things that sometimes I fear that someone does not shoot me,” said Fico as quoted by Sme. “Do you understand it?”

The prime minister, however, provided no further clues about the type of information he has.

According to the SITA newswire, the prime minister said that neither he nor his party have waged a furious campaign against SDKÚ. He described Dzurinda’s withdrawal as a candidate as an empty gesture, saying that nothing had really changed in SDKÚ. The people, structure, accounts and money remain the same, Fico said.