ROBERT Fico’s Smer party won by far the highest number of votes in Slovakia’s parliamentary elections on Saturday, June 12. But there were no wild celebrations at the party’s headquarters on election night because the other results mean Fico may well find he is unable to secure coalition partners to form the next government. He will not be able to rely on the Movement for a Democratic Slovakia (HZDS), whose support fell below 5 percent, meaning it will not be represented in the new parliament. The Slovak National Party (SNS), Smer’s other coalition partner in the outgoing parliament, cleared the threshold by a whisker, according to preliminary results announced after all the votes had been counted. It will get another four years in parliament after gaining 5.07 percent of the national vote. 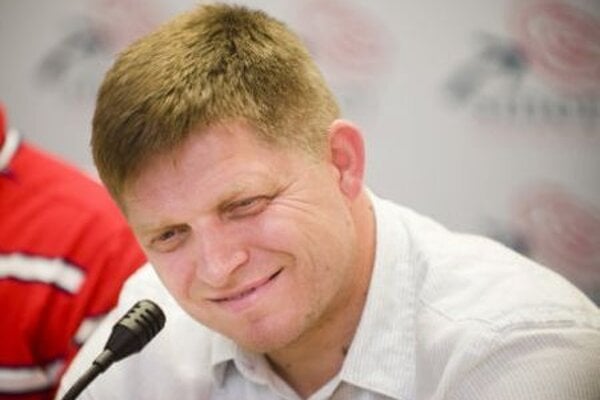 ROBERT Fico’s Smer party won by far the highest number of votes in Slovakia’s parliamentary elections on Saturday, June 12. But there were no wild celebrations at the party’s headquarters on election night because the other results mean Fico may well find he is unable to secure coalition partners to form the next government. He will not be able to rely on the Movement for a Democratic Slovakia (HZDS), whose support fell below 5 percent, meaning it will not be represented in the new parliament. The Slovak National Party (SNS), Smer’s other coalition partner in the outgoing parliament, cleared the threshold by a whisker, according to preliminary results announced after all the votes had been counted. It will get another four years in parliament after gaining 5.07 percent of the national vote.

However, the coming four-year term promises major changes from the one just ended, since the country’s centre-right parties together gained eight seats more than the collective total of Smer and the SNS. Before the election, all the centre-right parties promised not to cooperate with Fico’s Smer, which received 34.78 percent and gained 62 seats in the 150-seat parliament. Speaking on private broadcaster TV Markíza on Sunday, 13 June, all the centre-right leaders reiterated their promises not to negotiate with Smer.

The election turnout was 58.83 percent, slightly higher than in 2006, when 55 percent of eligible Slovaks caste their votes. The figure was well above the turnout predicted by pre-election opinion polls, which estimated it would be around 50 percent.

“Good morning Slovakia; it does seem that change is within reach,” said SDKÚ election leader Iveta Radičová the morning after the elections.

She congratulated Fico and his Smer party on coming first in the election, adding that “it is not enough to win the elections, however; one needs to have the potential to rule and [to create] the next government”.

Radičová said that she is ready for bilateral talks with the leaders of SaS, KDH and possibly Most-Híd. She confirmed that the SDKÚ will not negotiate with Smer.

Shortly after the first results started to come in on Saturday evening, Fico said he was prepared to either rule or go into opposition. At a press conference early on Sunday, June 13, the Smer leader said that he was absolutely happy with the election results and was ready to accept the challenge of forming the next government once President Ivan Gašparovič, who was himself backed by Smer in last year’s presidential election campaign, charged him with doing so.

He acknowledged that he would face difficulty making a deal with any of the former opposition parties, saying “We will not beg to anyone; we have our values.” In explanation, Fico referred to the concept of what he calls a socially-oriented state and the protection of national interests.

However, speaking later on Sunday, on TV Markíza, Fico said that if the centre-right parties managed to reach an agreement among themselves he would not obstruct them from forming a governing coalition.

At a press conference early on Sunday afternoon, President Gašparovič said that he would first ask Fico’s Smer party to try to form a government, adding that this was the “moral” thing to do.

“[If] these numbers are true, then it is an unambiguous defeat for Slovakia,” he said. “If any of the Hungarian bodies make it into parliament, during their rule there will be political autonomy in southern Slovakia. It makes me want to cry; Slovaks have saddened me. We all will be crying bloody tears.”

Slota concluded that following the election, “Hungarians and homosexuals will rule Slovakia”.

SMK and HZDS locked out of parliament

For the first time in its 12 years on the Slovak political scene, the Hungarian Coalition Party (SMK) failed to make it into parliament, after winning only 4.33 percent of the vote. The party, which was created before the 1998 elections from the Coexistence Movement, the Hungarian Christian Democratic Movement and the Hungarian People’s Party, has haemorrhaged support since internal conflicts led to the departure of former leader Béla Bugár and other MPs in July last year. Most-Híd, the new party established by Bugár and his supporters successfully made it into parliament.

The SMK had been hoping that votes from ethnic Hungarians in election precincts in the southern part of Slovakia vote would keep them in parliament. After the result became clear on election night, party chairman Pal Csáky avoided making any substantial comments and left SMK headquarters early. The following day he and the entire leadership of the SMK resigned.

In a momentous development, former prime minister Vladimír Mečiar was ejected from parliament after almost two decades in politics. His HZDS won only 4.32 percent of the vote.

“The HZDS has not lost; it is Slovakia’s loss,” the head of the HZDS’ national council Marián Klenko announced. He said that Slovakia had chosen the path of decreasing social security, legalisation of drugs and acceptance of homosexual marriage. He said that HZDS boss Mečiar was analysing the results and would make a statement “when the time comes”.

Due to large storms and electricity outages on Saturday evening, voting in a few precincts was prolonged. The delays meant that the Central Election Commission postponed its announcement of the official election results to 15:30 on June 13.

Smer will be a tough opposition

Political analyst Miroslav Kusý believes that the current Slovak opposition has a fair chance of forming a government, although it will be hard and complicated. The positive thing is that most of them have experience of running the country, he told the SITA newswire.

Kusý believes complications might occur because of the strong opinions of the KDH on some topics and the unpredictability of newcomer SaS in situations where compromise might be necessary. Also, he predicted, Smer would be a tough opposition for a possible centre-right coalition.

According to Kusý, the biggest surprise for him was the SMK’s failure to clear the 5-percent threshold, since Hungarian voters were believed to be relatively conservative, something which in pre-election estimates was assumed to favour the SMK as opposed to the newly-established Most-Híd.

Sociologist Zora Bútorová agreed that the SMK’s performance was surprising, as well as the election turnout of almost 59 percent, much higher than estimated by pre-election opinion polls.

“We do not know yet who filled that in, who increased it,” Bútorová said, as quoted by the SITA newswire, adding that the final results would reveal the details but that the turnout most likely went up thanks to younger voters and urban dwellers.

Jana Liptáková and Ján Pallo contributed to the election coverage