“IT WOULD not help if I were to step down from the position of election leader,” Slovak Democratic and Christian Union (SDKÚ) chairman Mikuláš Dzurinda said a couple of days before the parliamentary elections, in response to a question by a reporter from the Sme daily about the declining popularity of his party. 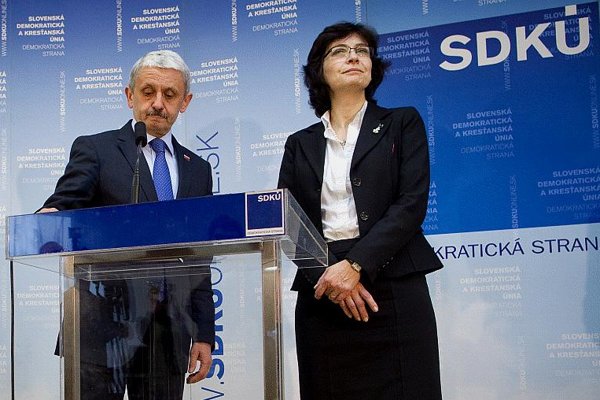 “IT WOULD not help if I were to step down from the position of election leader,” Slovak Democratic and Christian Union (SDKÚ) chairman Mikuláš Dzurinda said a couple of days before the parliamentary elections, in response to a question by a reporter from the Sme daily about the declining popularity of his party.

But only two days after the March 10 elections, in which the SDKÚ saw its support plunge to 6.1 percent – only just above the 5-percent threshold required to win seats in parliament – Dzurinda announced that he would not seek re-election to the chairmanship or any other leading position in the party. The SDKÚ will therefore elect a new leader at a conference scheduled for May 19.

The SDKÚ, which Dzurinda has led since it was founded more than ten years ago, won 15.4 percent of the vote and 28 seats in the June 2010 election; it will now have just 11 seats.

“I am taking full responsibility for the inability of the centre-right parties to form a government, as well as the failure of the SDKÚ to contribute in the way it has the potential to,” said Dzurinda, who served as prime minister for eight years between 1998 and 2006, and who has been in politics for 21 years. He said he would remain in parliament as an ordinary MP.

Dzurinda rejected any comparison between the fate of his party and that of another former prime minister, Vladimír Mečiar, whose Movement for a Democratic Slovakia (HZDS), which dominated Slovak politics in the 1990s and was in government as recently as 2010, was consigned to political oblivion when it won less than 1 percent of the vote on March 10.

While observers commented that Dzurinda should have quit the leadership much sooner, they also suggested that the party may now be able to stage a comeback if it effectively changes its leadership and communication style.

Dzurinda said he would support the leadership bid of Lucia Žitňanská, one of his party vice-chairs, adding that he was pleased that the outgoing justice minister had shown an interest in the post.
In comments broadcast on TV Markíza the morning after the election, Dzurinda admitted that the number of preferential votes he personally had received also represented a defeat.

Žitňanská, who said before the election that she would seek the leadership if she received enough preferential votes, collected 103,517, the highest number of any SDKÚ candidate, while Dzurinda attracted only 27,242.

Darina Malová, head of the school of political sciences at Comenius University, told The Slovak Spectator that the SDKÚ would be able to win back support if it undertook the necessary organisational and personnel changes, and altered its method of communication.

According to Malová, one of the party’s problems was that its leaders, specifically Dzurinda and deputy chair Ivan Mikloš, were unable to communicate effectively with outgoing Prime Minister Iveta Radičová, another deputy chair of the party, and thus provide her with strong support.

“It was a great strategic mistake that these people did not find a way to [achieve] an effective and mutually beneficial co-existence,” Malová said.

Marek Rybář, also from the school of political sciences at Comenius University, suggested that for the SDKÚ the next, and most important, step will be to build a new team around new topics.

“If Žitňanská becomes the new leader, which seems very likely now, she will have to undergo quite significant changes because at the moment she is linked to a single, very strictly defined agenda, which is the rule of law and justice,” Rybář told The Slovak Spectator. “This works well for a minister but might not be enough for the leader of a political party. Thus she will have to articulate many more issues outside her main agenda and work on a new agenda.”

Senior SDKÚ members met to discuss the party’s election performance on March 12, but the meeting lasted only 45 minutes, with attendees already anticipating that Dzurinda would relinquish his position.

Former SDKÚ deputy Tomáš Galbavý, who leads the Nitra branch of the party, said that Dzurinda should have withdrawn from the top post much sooner, the Sme daily reported. Galbavý compared the election results to Napoleon’s final defeat at Waterloo.

“I have read quite a lot about Waterloo, but now I have experienced it on my own skin,” said Galbavý.

Political analyst Ján Baránek said that considering the election results, Dzurinda’s move was logical but that “it should have come much sooner, at the least before the elections, when it was already clear that the SDKÚ’s support was falling”.

Rybář too said that the change should have come much sooner. It was the reason why many people did not vote for the SDKÚ since it is “difficult to vote for a party which has an unpopular leader”. He said that the party was ready for a change in 2010, and even as early as 2006. But he noted that in the 2006 election the SDKÚ scored over 18 percent – its best ever result – and so from Dzurinda’s point of view it was not a defeat, despite him losing the premiership.

Dzurinda had been getting signals since long before the elections, said political scientist Miroslav Kusý.

“He had been resisting those pressures until the very last moment, saying that he simply would not give it up,” Kusý told The Slovak Spectator. “Yet his attitude, which in a war would have been heroic, in politics came across as a rather suicidal since he was prolonging the agony of the party and this crisis was evident since the fall of the government of Iveta Radičová.”

Kusý was rather sceptical about the party’s ability to win back voters since he said it had not demonstrated any ability for growth. He pointed out that the party machine had kept supporting Dzurinda despite the fact that he was the least acceptable person for the wider public.

As for the mistakes that the SDKÚ has made, Kusý said that some of these reached back to the first Dzurinda government, during the so-called Little Group scandal, when the then prime minister insisted that there was a so-called “small group” of people who were harming the state and on that basis sacked the boss of the country’s security vetting authority.

Dzurinda barricaded himself in a position as an unquestionable leader “who was making all the decisions on his own while ignoring coalition partners”, said Kusý.

“Then when Radičová came from outside, the party did not fully accept her,” Kusý noted, adding that she was in some ways abandoned by her own party despite the fact that she had brought it public support.