THE JEWISH Community Museum in Bratislava has been offering different exhibitions each summer season, while being closed in winter. This year, the exhibition on a so-far unknown, or less-known concentration camp in Petržalka will be its focus. 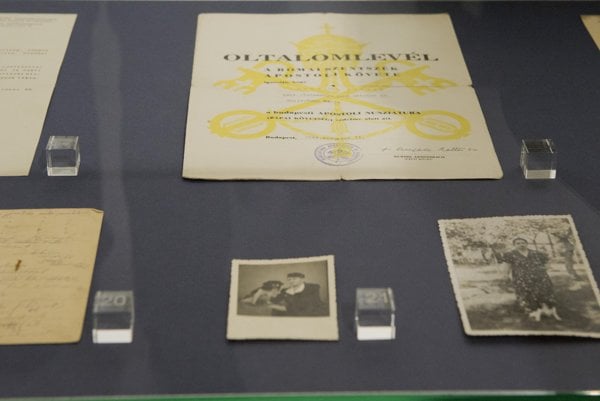 The Petržalka borough of Bratislava was once called Engerau in German, (as at least three languages were used equally in the city, Hungarian, German and Slovak), the TASR newswire wrote. Located in the former dairy of Mária Ajpek in Richthofengasse 19 – today’s Gessayova Street and Námestie Hraničiarov square – the camp housed about 1,700 Hungarian Jews who were imprisoned there between December 1944 and spring 1945, and were originally meant to build a defence wall – which proved useless, however, as the liberating Soviet Army did not even mention it. Many of them died in the unheated buildings, the Petržalské noviny local newspaper wrote.

About a month before the end of World War II, on March 30, 1945 (Good Friday), most of them were killed by guards and the remaining inmates were sent on a death march, all the way to Bad Deutsch-Altenburg.

The few facts that are known (as only sparse documents have been found) and the artefacts proving the history of this camp (many saved by gravedigger Leopold Prepelica and then owned by several people and institutions) are exhibited within the Engerau: The Forgotten Story of Petržalka exhibition that can be visited between May 29 and October 11 (Fridays and Sundays 10:00-16:00) in the Jewish Community Museum placed in the synagogue at Heydukova 11 in downtown Bratislava.

“This was the story of Hungarian-Jewish prisoners and their Austrian torturers from the time when Petržalka was not Slovak but German,” Maroš Borský, head of the Jewish Community Centre, told TASR. “We believe that the story of the Nazi camp Engerau must not be forgotten.” More information can be found at www.synagogue.sk and www.engerau.info.