American football catching on in Slovakia

Popularity of American football is outgrowing soccer in terms of game attendance but it still needs support to become a staple sport in Slovakia. 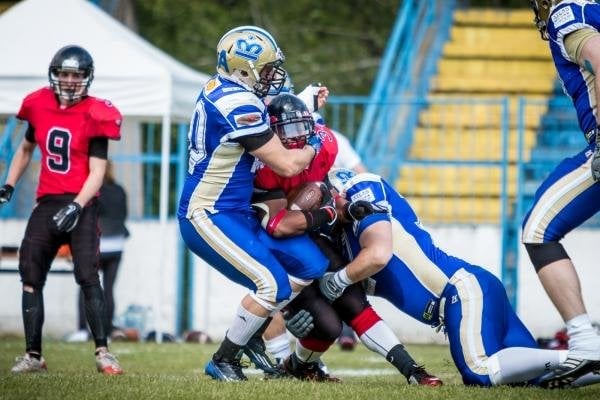 SATURDAY, July 4th was a big day for football in Slovakia but not for fans of soccer, which has a deep tradition in the country. The American football team Bratislava Monarchs triumphed in the final of the Hungarian American Football league (HFL). The Monarchs defeated the Budapest Wolves 55 to 33 and earned one of the most prestigious trophies in Europe.

Together with rugby, American football arrived to Slovakia in the 90s, after the opening of the borders brought Anglo-Saxon influence. Many see American football as a symbol of consumerism and Americanisation due to the excessive media coverage of the NFL. However, it puts demands on skills, such as throwing and catching the ball, and also requires physical fitness and strength.

Unlike rugby, American football is characteristic of detailed tactics and coaching decisions often interrupting the game flow. In the American NFL, the team’s coach is in direct radio contact with the quarterback – the play-maker – who mediates the calls to the rest of the team.

There are 11 men on the field from each team during play, but the overall number of players on a team can be up to 40, as there are different line-ups for defence, offence and also special teams, for example when it is necessary to execute a kickoff, punt or field goal.

Ordinary people might not understand the terms, such as interception, touchdown or end zone, but a growing number of young people are being attracted to this competitive spare-time activity, which was also confirmed by Galka.

“There are nine teams registered in Slovakia and approximately 350 – 400 players,” said Galka, adding that all of the players are amateurs.

“In 2015, six teams played in two groups,” said Galka. “Each team played six matches in the league part, followed by elimination matches in the playoffs. However, the model of the league depends on the number of the teams that enrol.”

The players are mere amateurs, with no salaries or rewards. Apart from occasional sponsorship, they buy their own equipment.

“Finances are an existential part of every sport, including American football,” confirmed Galka. “There is no support from the state and the particular teams are financed from their own means, such as membership fees, tax assignations and advertising deals.”

However, the attendance during some matches is higher than at the soccer club Slovan Bratislava, which testifies to the growing popularity of American football. Just for comparison, the budget of Slovan is around €4 million while the Monarchs make do with €60,000.

So far, the Slovak national team played three friendly matches – twice against the Czech Republic and once with Slovenia.

“In September, they will face Switzerland in a qualifying match for the European Championship,” said Galka.

The main ambitions for Slovak American football is to be ranked amongst the regular sports with interest of media and spectators as well as a base of talented youth.