Charge d’affaires Wasley pays tribute to US soldiers in Slovakia

THE USA appreciates the efforts of Slovak citizens to look after memorials dedicated to American soldiers who died in combat in Slovakia, announced the US Embassy to Slovakia's Charge d’affaires Liam Wasley at the Memorial to American Airmen in Trenčianske Teplice in the Trenčín region on November 12. 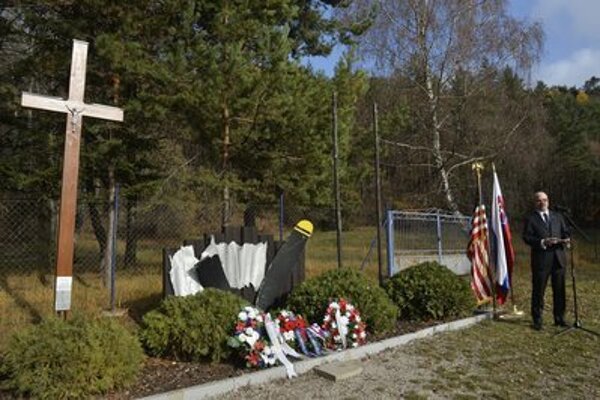 “About 20 American aircraft were shot down over Slovak territory during the Second World War,” said Wasley, as quoted by the TASR newswire. “Today’s commemoration is a symbol through which we remember all the victims and also the care that the people of Slovakia gave to pilots who were shot down, as many of them helped them. It’s also to acknowledge our cooperation at that time and today.”

Wasley’s visit to the memorial took place in the context of November 11 Veterans Day, during which the USA pays tribute to all of its soldiers and veterans, including those who died in action.

“We came to Trenčianske Teplice to commemorate the 71st anniversary of events that took place here,” said Wasley, as quoted by TASR.

On December 17, 1944 German fighter planes shot down an American Consolidated B-24 Liberator bomber with a crew led by Kenneth B. Smith. The aircraft fell to earth in Kamenická Valley, near the town of Trenčianske Teplice, TASR wrote.

Gunner Roland W. Morin received a fatal wound, while German soldiers captured eight of the surviving crew members. Five of these, including the pilot, were transported to the barracks in Trenčín. Another three were placed temporarily in a hospital in Trenčín due to their injuries.

The remaining crew member, Edwin Burkhardt, landed by parachute in the hills, where he was found by three Russians that had fled from a prisoner of war camp and joined the partisans. These Russians led the aviator to the village of Omšenie, where local people hid him until the Soviet army liberated the area on March 20, 1945.

Trenčianske Teplice Mayor Štefan Škultéty noted that several residents of the town’s Baracka area built a memorial on the crash site in 1994, using some authentic fragments of the aircraft. A ceremonial unveiling of the memorial took place the same year.

Fifty-six years later in the year 2000 five of the aviators from the fallen aircraft were contacted. They visited Trenčianske Teplice and the memorial to Roland W. Morin. In 2008, the memorial was renovated, and a ceremony to mark Veterans Day took place there for the first time.

“Last year, a storm destroyed the cross that was next to the memorial,” Škultéty said, as quoted by TASR. “The town had a new one made, and it was consecrated today by a local priest.”