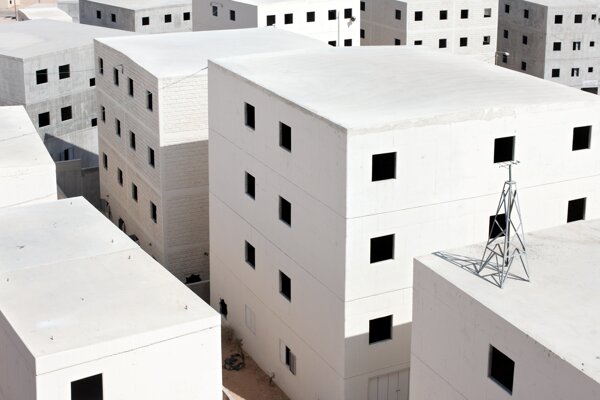 ALMOST 40 photos of various sizes are hanging on white walls without any captions. They depict the recruitment of Israeli boys and girls, drilling and practising of civil defence as well as scientific experiments, but many of them are people-less, as if motionless. In spite of this stillness they radiate tension and unrest. 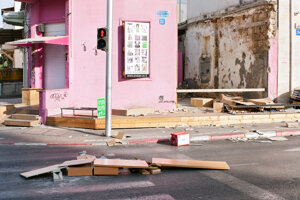 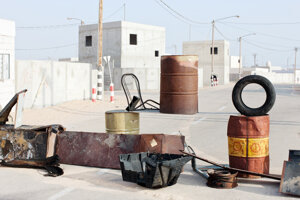 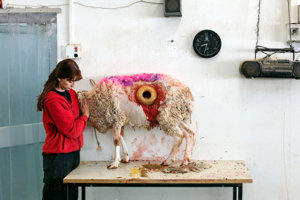 These photos, exhibited at the Slovak National Gallery within November’s Month of Photography, were the contribution of prominent Slovak photographer and cameraman Martin Kollár to the international project This Place. Kollár was one of 12 photographers chosen worldwide for this project initiated by French photographer Frédéric Brenner to depict Israel in a project following the tradition of large documentary projects like the Farm Security Administration in the United States in the 1930s or DATAR in France in the 1980s. Their assignment, along with other chosen photographers such as Josef Koudelka, Fazal Sheikh and Stephen Shore, just to mention a few, was to spend at least six months in Israel and reflect in their own photographic way what is going on in the country. Their only limitation was to take pictures within the physical borders of Israel, either on the Israeli or the Palestinian side.

“Absolute artistic freedom; I had at disposal an assistant who helped me with research,” said Kollár, adding that he sent her a list of about 60 places in Israel he had wanted to visit and then he set off for his field trips, as Kollár called his visits.

When deciding on how to capture the theme of Israel, the most photographed country in the world and well known worldwide for the Israeli-Palestinian conflict, Kollár decided to focus neither on its past nor present but on searching for situations and topics somehow linked with the future. This approach of looking for situations that represent a possibility or a preparation for something led him to military training sites, research institutions or archives where he went for field trips.

“We have connected the expression field trip with trips during our childhood, but basically a field trip means that a group of people goes to a place that is outside of their daily routine, see it and after returning home they make a kind of output,” said Kollár.

In Kollár’s case this output was the photos, while he used the expression “field trip” also as the title of his project and exhibition.

In order to avoid declaring any political stances with his photos, Kollár also limited himself to taking pictures only on the Israeli side.

All the photos exhibited are from situations that Kollár found, i.e. they are not staged, and they are without captions, requiring a bigger involvement of visitors than more classic exhibitions or photos.

“You are the caption,” said Kollár. “My effort was to put enough information in the picture [in order for the visitor to find out what the picture depicts] but of course there is a gap, something that is not said, and it is up to you to fill it with something.”

But Kollár actually thinks that the photos from the project might be more interesting only after some years.

“What was happening in the 1930s in the USA or in the 1980s in France is more interesting now than it was at the moment when those photos were taken,” said Kollár, adding that individual projects of the 12 photographers who participated in the This Place project create a kind of mosaic and a time capsule. “When it will be, after some years, opened one day... it will be a cross section of what was happening at the beginning of the 21st century.”

Aurel Hrabušický, one of three curators of the exhibition, compared the photos to Kollár’s previous photographic works in which he liked paradoxes. In the Field Trip project, compositions are mostly very simple and transparent, “as if he wanted to make his assignment more difficult. He was rather interested in a peculiar immovableness”. Hrabušický even cited one French journalist as saying that these are the various ways in which Kollár is playing with emptiness.

“The images have a special magic; even though this magic is linked with a certain detachment, sometimes with an alienating detachment, but despite this it keeps a dense atmosphere,” said Hrabušický in the SNG’s video about the exhibition, adding that this is not commonly achieved by photographers, when some documentary photographers take their pictures in the style of the New Objectivity or they attempt to be part of what is going on and work with a lot of emotions. “Kollár seems to be as if he is moving somewhere between; that you are feeling the emotion somewhere in the background but simultaneously he sticks to objective accuracy. There is something relentless. I call it post-humanistic photography”.

The SNG has published, on the occasion of the exhibition, a catalogue of r works by Martin Kollár thus far, named Catalogue.