Several people are sitting around a bonfire, holding beers, and listening to soulful country music. Behind the guitarist and beyond the tents is the sound of the splashing Hron River.

People have gathered at this outdoor camp, equipped with just a simple latrine and rainwater showers. Some have paddled the river a hundred times and say that they still enjoy it, others – trying to dry next to the fire – made this their first experience in Slovakia. Rafting is probably not the main reason to journey to Slovakia. While the country is not noted for its adrenaline-pumping rivers, kayaking or rafting can enrich any stay. There are a number of beautiful rivers to enjoy boat time with friends, watching the surrounding countryside drift by, and gaining some skills with a paddle. The more adventurous can find the occasional white-water rapids.

The main advantage of Slovak rivers are their diversity – whether you are a beginner or advanced, there is a river to suit your skills. “Boating is an escape from the city, noise, and bustle to nature and silence. It offers the opportunity to spend a weekend with friends,” said Zuzana Polakovičová, a finance manager from Bratislava and paddling enthusiast. 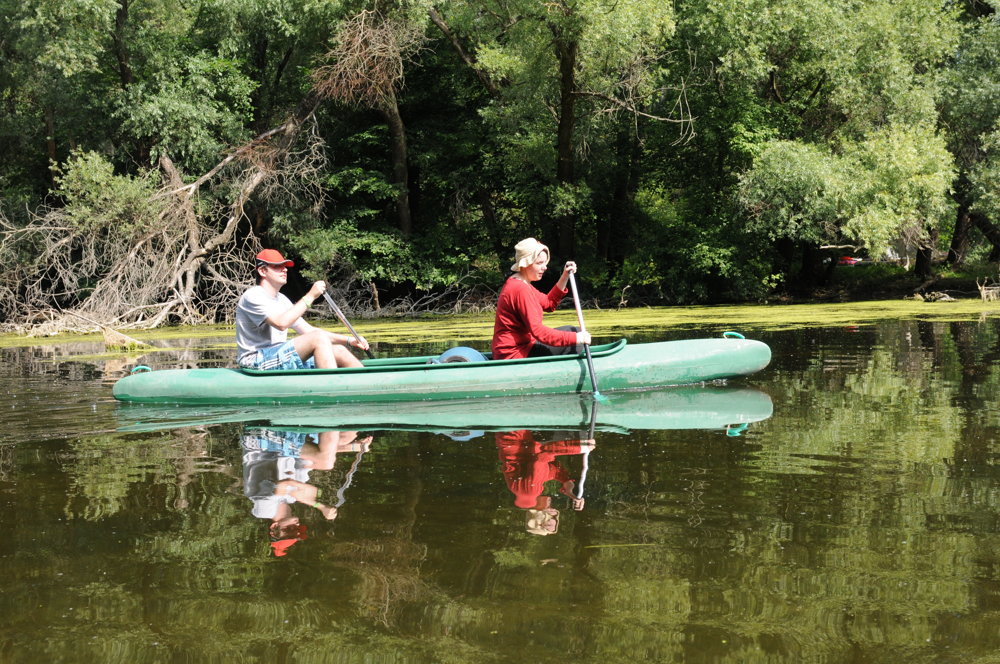 A new way to explore Slovakia

The Hron is the second longest river in Slovakia and among the most popular for watersport lovers. Most of its 300 kilometres are suitable for paddling in a canoe or raft. It is one of the few Slovak rivers that includes significant infrastructure on shore – mostly small outdoor camps, like the Lodenica na Mlynčoku, which is found near the main road from Banská Bystrica to Brezno in central Slovakia.

The Hron can be divided into three parts. While the upper Hron from its source in Červená Skala to Brezno is usually only navigable during the spring and is intended for experienced boaters, the middle part is the best place for people of all ages and skill levels. The most popular stretch of river begins next to motel Nemecká and ends at campsite Lodenica na Mlynčoku (about a two-hour journey), where you can spend the night or continue toward Banská Bystrica.

Several campsites are available on the way to the Hron’s confluence with the Danube near Štúrovo in south Slovakia. “We tried other campgrounds on the way, but there is no place with the atmosphere of Lodenica na Mlynčoku,” said Ľudmila Švoreňová, while disembarking from a raft in the camp. “I am not sure if it is about the surrounding, the people or the services.”

Slovak rivers: castles above, water below 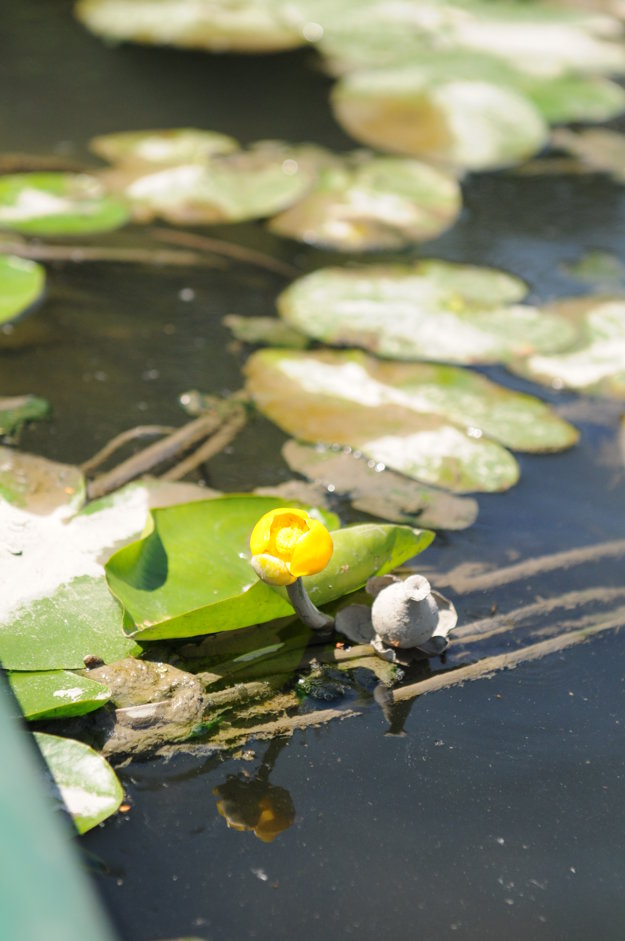 The Váh River, the longest in Slovakia, is another rafting and canoeing destination. A few kilometres from Žilina, on the way to the Tatras, are the massive ruins of the Strečno Castle. Tourists can float around it in rafts but more comfortable (and safer) wooden boats are also available. Visitors can take in another impressive castle – the Orava Castle – in the same way. The Orava River is suitable for beginners, but advanced water-lovers can enjoy it too. All of the previously mentioned rivers offer short or long multi-day routes. For people who prefer calm and slow rivers, the Malý Dunaj (Little Danube) located just a few kilometres from Bratislava, offers a relaxing trip through the woods of the Danubian Lowland. The first stretch starts on the outskirts of Bratislava. It takes about five hours of paddling to reach Tomášov, where you can finish or continue to Komárno.

The eastern part of the country also offers river adventure. “When we were kids, we used to play next to the Hornád River,” recalls Ľuboš Grajcár, the owner of a travel agency dedicated to rafting. “Once we suddenly spotted boats on the surface – we watched all those beautiful canoes until the last of them disappeared. It was like a revelation… Some time after we found a tractor inner tube – and that was the beginning of our rafting.” Originally, he wanted his son to follow his hobby, but in Košice, the largest city in eastern Slovakia, it wasn’t possible to rent a canoe. “After I joined a local kayak club, I decided to set up my own business and offer this experience to others,” Grajcár said.

Grajcár considers Slovak rivers ideal for beginners, families and tourists. While the Hornád was not very well-known for water tourism, three years after he started a canoe and kayak rental business and school, tourists from Germany, France, Israel and South Korea followed. “You can see places you know from the river bank with a different perspective,” Grajcár said. Today, the most popular river journeys are from the reservoir Ružín to Košice, then further to the Hungarian border.

In Slovenský raj (eastern Slovakia) the Hornád Canyon (Prielom Hornádu) has reopened for boating. But unlike on other rivers in Slovakia, there is a limit on the number of boats that can pass it daily, since it is part of a protected area. 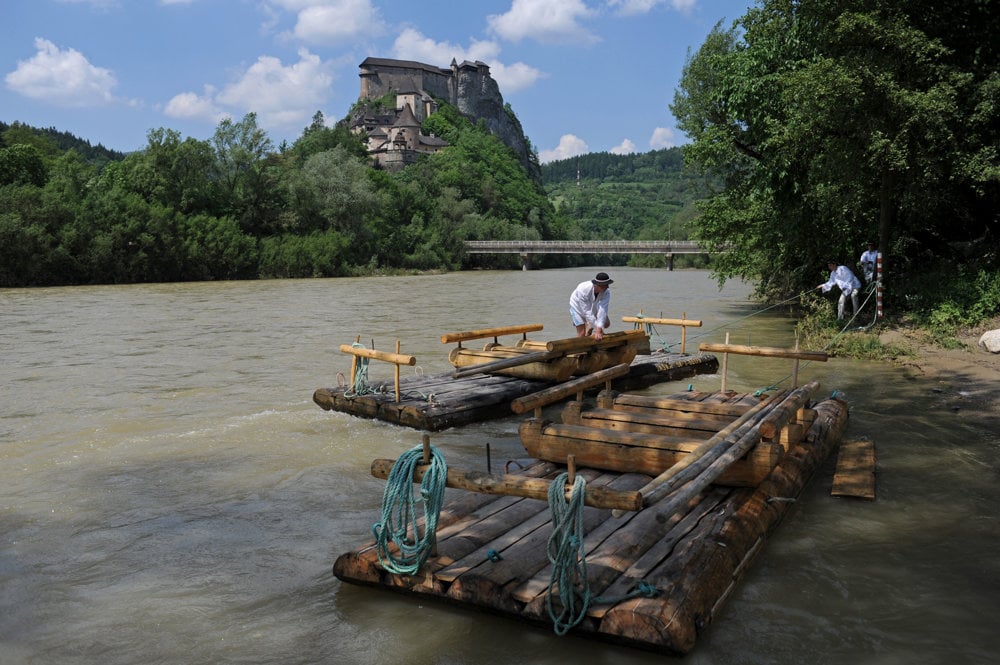 While Grajcár hopes his son will follow in his footsteps, in other parts of eastern Slovakia, a strong multi-generational connection with the rivers is already apparent. “Our great-grandfather Matej Laincz started rafting in 1910, and after World War II, our grandfather devoted himself to rafting,” said Helena Lainczová, a rafting company owner from Červený Kláštor. “His sons – my husband was among them – also followed in his footsteps. Today our sons are taking care of the business.” But rafting on the Dunajec, a river on the Slovak-Polish border in the heart of the Pieniny National Park, is unlike rafting in most places.

Dunajec is well-known for its traditional wooden boats, previously used to transport goods. Today, the boats consist of a few wooden canoes, guided by men in traditional folk costumes, who sail through a picturesque canyon surrounded by steep rocky crags.

“Every year, thousands of foreign tourists come to Pieniny,” said Lainczová. “At first sight it is a severe landscape, but it abounds with unique folk architecture, historical monuments, and natural beauty.” A 100-minute boat ride starts in Červený Kláštor and ends near village called Lesnica. Renting a bike at the end of the boat ride is recommended for returning to the beginning. The bike trail on the riverbank offers a view of the surrounding mountains, especially the majestic Tri Koruny hills.

Dunajec is also popular for rafting in inflatable rafts or canoes. Beginners can take to the water with an instructor. On hot summer days the river can be calm with lower water levels, but melting spring snows change the Dunajec into a wild river. One rafter attracted by the latter atmosphere is Branko Bugorčík, a kayak instructor from Košice. “Slovakia has mountains, thus it has more wild mountain rivers suitable for rafting, but just few of them are navigable throughout the year,” he said.

For those who want to ride the rapids in a rubber raft, Belá River is the best choice. Belá rises under the majestic peak Kriváň, and flows rapidly into the Váh River in Liptovský Hrádok. The most extreme rafting experience is available only during April and May, when snow from Tatra mountains is melting. White-water rafting at Belá River is recommended only for experienced rafters, but with the help of an instructor, others are also welcome. 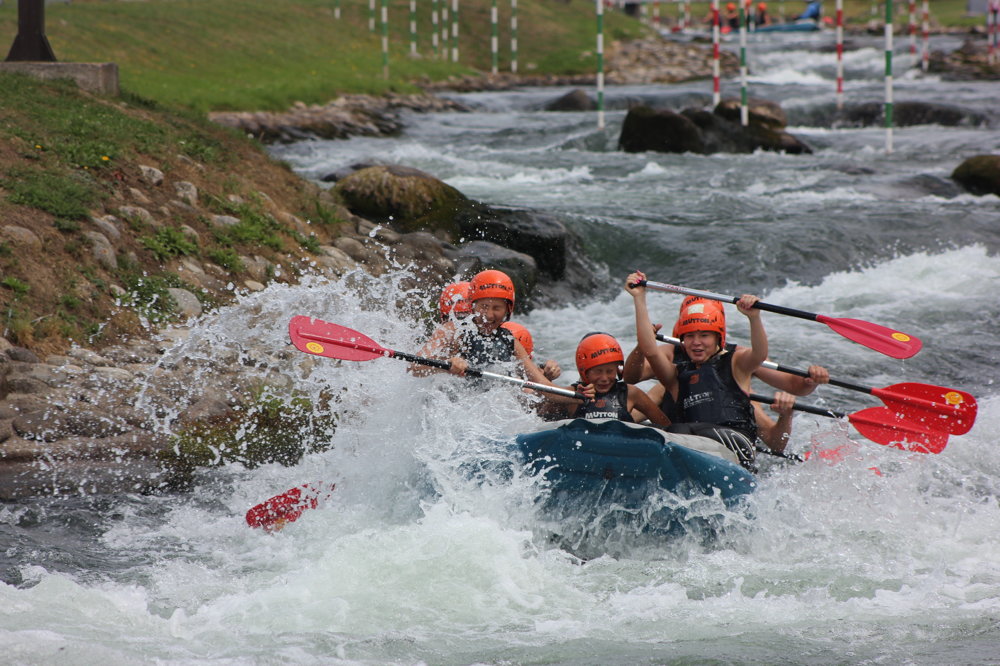 In recent years, Slovakia’s most successful Olympic sport has been kayaking, specifically the white-water slalom. Michal Martikán, Elena Kaliská and the twin brothers Peter and Pavol Hochschorners are among those who have won gold medals at the Olympic Games. According to Bugorčík, their successes have increased the popularity of water sports in Slovakia. The rising popularity of white-water rafting can be seen in Liptovský Mikuláš, the so-called city of Olympic champions, in central Slovakia, where Martikán, Kaliská and several other successful athletes live.

Large groups of people wait every morning for Ondrej Cibák’s slalom area on the outskirts of Liptovský Mikuláš to open. In this artificial canal beginners can try wild waves alongside athletes training for the Olympics. Even advanced kayakers are bound to face a challenge. Closer to the capital for those in western Slovakia is Čunovo, just 25 minutes from the city centre of Bratislava and home to an artificial water channel similar to that offered in Liptovský Mikuláš. Options abound for activities ranging from team-building rafting to individual kayaking classes.

Even though the infrastructure is developed on some rivers, state efforts to harness hydroelectric power are a frequent impediment to white-water adventure. In 2011, the Ministry of Environment suggested building another 368 small water electricity plants in the coming years, including some on the most popular rivers for water sports. Dams and electricity plants pose a barrier for boats, and tourists need to carry the rafts a few hundred metres along the shore before continuing on the way. According to Grajcár, such facilities are a major threat to rafting on the Hron since the river remains the most popular place for paddle hobbyists. “And we are fighting to keep it that way,” Grajcár said. 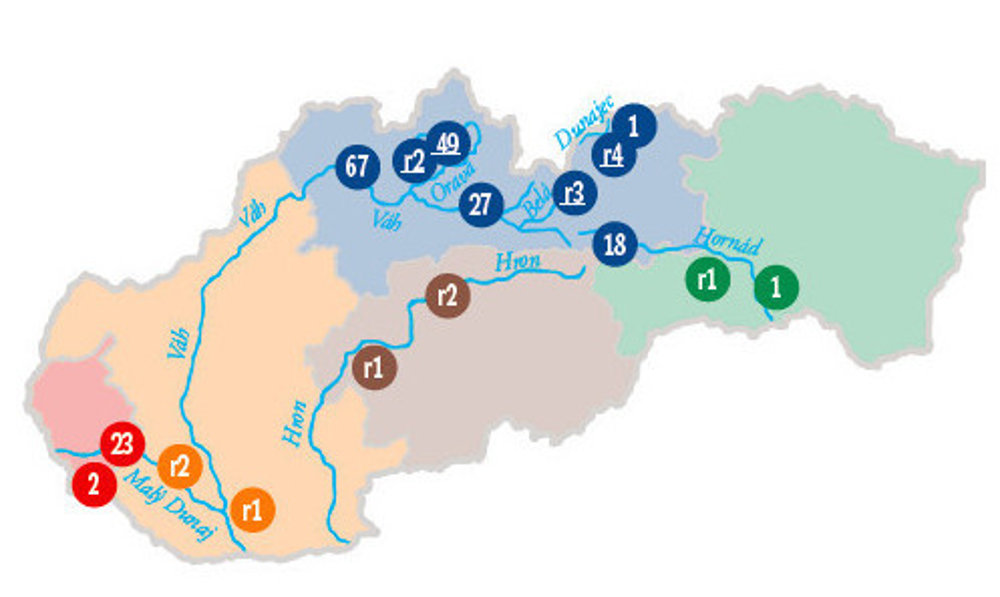