Anti-flood project in Bratislava has been successful

Statistically floods in Bratislava may occur every five years. 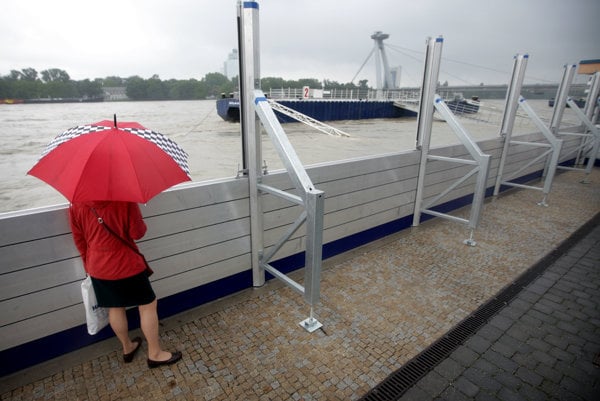 The anti-flood protection in action in Bratislava in 2013. (Source: Sme)
Font size:A-|A+0

The anti-flood protection project for Bratislava has been successful, as proved mainly during the great flood from three years ago, said Peter Čadek of the state-run Slovenský Vodohospodársky Podnik (SVP) during his visit beneath Devín Castle on November 4. The visit was part of the 5th Annual Forum of the EU Strategy for the Danube Region taking place in the Slovak capital between November 3 and 4.

“The project has worked without any significant problems; it was tested in action by the flood of 2013,” said Čadek as cited by the TASR newswire. “It was designed to withstand millennial water.”

The millennial water represents a flow of 13,500 cubic metres of water per second while the regular flow of the Danube River amounts to somewhere between 2,000-2,800 cubic meters per second.

The project was completed in 2010. Construction of the anti-flood protection from the Devín Castle to the town of Gabčíkovo (Trnava region) cost around €32 million. It was co-financed from the EU Cohesion Fund.

He recalled that after the flood in Bratislava in 2002 Slovakia decided to build anti-flood protection. Statistically, floods in the capital can occur every five years. During the floods in 1965, 2002 and 2013 the water level of the Danube surged to more than 10 metres while it flooded hundreds of thousands of hectares of land.