Generations struggle with the transfer of knowledge

The quick changes in technology hinder the communication between older and younger generations and impact on the operation of society as a whole, says professor at Fordham University, in New York. 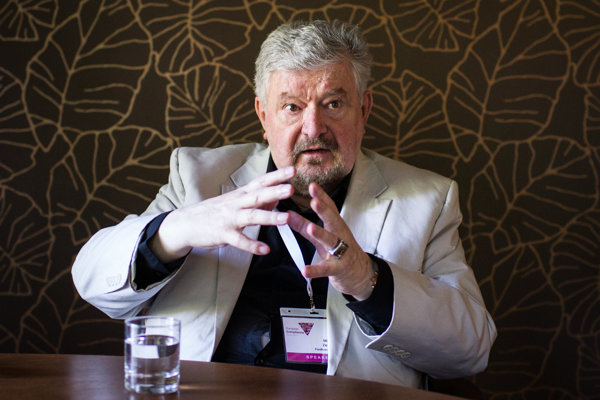 The generations are no longer as they seemed to be in the past. Changes come quickly and the knowledge and experience that parents pass onto their children is often not enough to help them solve problems in the future, said Milan Zelený, professor at Fordham University in New York, in an interview with The Slovak Spectator.

He talks about how these rapid changes impact the generations and what needs to be done to tackle these problems.

The Slovak Spectator (TSS): In your opinion, we should prepare for more big changes to take place within each generation. What impact will this have on society?
Milan Zelený (MZ): The acceleration of change is a new reality. Until now, the change was very slow, and the generations could cope with it. People were living in the same environment for several generations, and they could transfer their knowledge and experiences to their children and grandchildren. We didn’t deal with the speed of the changes in economics or other sciences as there was no problem. Children learned everything at school and they could benefit from it during their whole life.

But the speed of changes started accelerating in 1970s or 1980s, when digital technologies, automats, robots and the internet appeared and the first problems emerged. With the arrival of new technologies parents cannot communicate well with their children as they both live in different times. The problems and conflicts emerge within the generations and within the family. This results in big trouble because parents cannot transfer their knowledge and experiences to their children. This creates a paradoxical situation, as the children need to teach their parents how to use the new technologies.

This acceleration of change has serious impacts and we are not prepared for them. We don’t even know how to describe this phenomenon as it has not become rooted as a new quality. We are unable to prepare children for their future life either at schools or at home. This is one of the basic reasons why the world faces such challenging times. The generations have lost their common language.

TSS: Are there any solutions to this problem?
MZ: The younger generation is at a disadvantage as it cannot influence the older generation which already follows certain principles. The only thing that can be done here is that both the older and younger generations admit they don’t understand and find their own ways to solve the problem. There is no learning, but what would be the point of teaching our children something they will not use?

TSS: So, what is the best way?
MZ: The younger generations certainly cannot change the older ones, it is impossible. They can only try to find ways to learn more about the environment and obtain some experiences without their parents interfering. The parents can teach their children some universal rules, but not about the everyday world.

Moreover, schools are about 20 years behind the main developments. The university is a kind of conservatory: it retains knowledge, but doesn’t create the new knowledge, although we need it. Though there are certain case studies where you learn how people used to solve problems in the past, it doesn’t work now as you have to deal with problems nobody has faced before. The same goes with children. They learn the most at ages 3-6 when the brain can receive much information. What we learn at this age shapes our character and basic relations to society. Later, we add new knowledge, but by the age of 20-25, people don’t change much. If we want to teach them something new, there are problems because the brain is full of old information.

TSS: Does this mean that we need some kind of change in society as a whole?
MZ: It must be solved practically. First, we need to realise that we have certain sources on the internet and the global networks so it is not very effective to teach certain information or remember it as one can quickly find it on the internet. We need to transform education from information to knowledge. I will give you an example: if you have a cookery book, it means you have information. But if you cook a good goose for dinner, you obtain knowledge. Current pupils do not learn knowledge, but only information. New ways, based not on teaching about facts and information but rather how to use them, need to be created.

We have to teach our children at the very beginning that they need to learn on their own. This can be done by giving them assignments, to tell them there is a problem that needs to be solved and it’s necessary to find all available information and come up with solutions. Though the problem doesn’t necessarily have to solved, it’s important that children start thinking about working on their own and come up with their own ideas, not wait for somebody to tell them what to do. People have the capacity to do this, but we have not been using it.

Another problem is that children aged 3-6 watch fairy tales instead of doing assignments. But everything in fairy tales is passive and children don’t learn anything from them. There are donkeys who after being shaken give you money or cloths offering food after the magic words are spoken. Moreover, the symbol of knowledge in these fairy tales is an old woman or an old man. Princesses get married to their princes. A stupid boy goes into the world, returns with the money and says he is not going anywhere else and will stay home. What will children take from that?