Slovakia commemorates the fall of communism

Several events mark the 28th anniversary of the November protests. 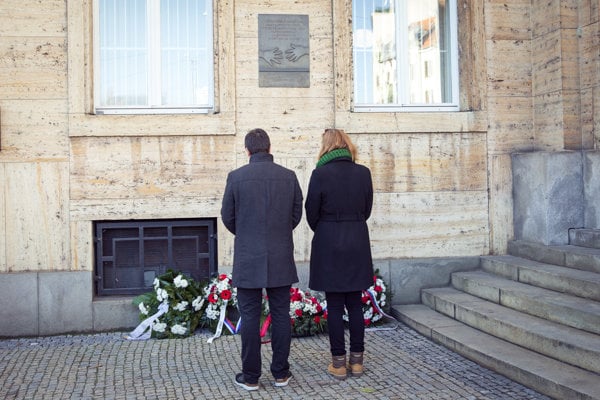 The memorial tablet on the main building of the Comenius University (UK) in Bratislava (Source: TASR)
Font size:A-|A+

Around 250 students expressed their resistance to their communist leaders and marched from the Presidential Palace to the main building of the Comenius University (UK) in Bratislava on November 16, 1989. They called for democracy, education reforms, abolition of the Socialist Youth Association and the possibility of travel.

The march took place only one day before November 17, commemorated in Slovakia as the day of the fight for freedom and democracy known as the Velvet Revolution.

The event was very important, said Róbert Zsembera, deputy chair of the UK’s academic senate, during a commemorative event held in front of the university on November 15, organised by the Nation’s Memory Institute (ÚPN) and the university.

“We have to remember what history brings us, what values we have received thanks to various moments,” Zsembera said, as quoted by the TASR newswire, adding that one of these was the 1989 Velvet Revolution.

The November 16 march was the first visible student event that took place in Slovakia, said Vincent Múcska, deputy rector of the UK.

The witnesses said that many participants were threatened with being kicked off their courses.

The event is commemorated by a memorial tablet which was revealed on the UK building on Šafárikovo Square in 2009.

Another commemorative event was held on Gondova Street on November 16. Part of the ceremony was the official release of the collection “Philosophers of November”, authored by Valér Mikula. It contains archive documents, the transcription of voice recordings from the faculty meetings, newspaper stories, interviews and memories of the participants in the November protests, as well as period pictures, the TASR newswire reported.

The commemorative events will continue on November 17, when German President Frank-Walter Steinmeier will arrive for his first official visit to Slovakia since being appointed to his post.

Apart from discussions with his Slovak counterpart Andrej Kiska, PM Robert Fico and Speaker of Parliament Andrej Danko, the presidents will lay wreaths at the memorial for political prisoners of communism in Bratislava’s Vrakuňa borough. Moreover, they will discuss the future of democracy in Europe with students and representatives of the civic society in the Žilina synagogue, TASR reported.

In addition, the Bratislava Self-Governing Region in cooperation with the ÚPN has organised the Day of Closed Borders on November 18 at the cycling bridge in Devínska Nová Ves. It is part of the seventh year of the Freedom Festival.

The borders will be symbolically closed in the morning and opened at 17:00. The opening will be followed by a march towards the memorial, organised in cooperation with Košice-based artist Peter Kalmus. The whole event will be closed by a concert at the Kamel Club in Karlova Ves, starting at 19:30.