The architect, urban activist and musician of the popular band Para Matús Vallo will run as a civic candidate, with the support of an expert team. 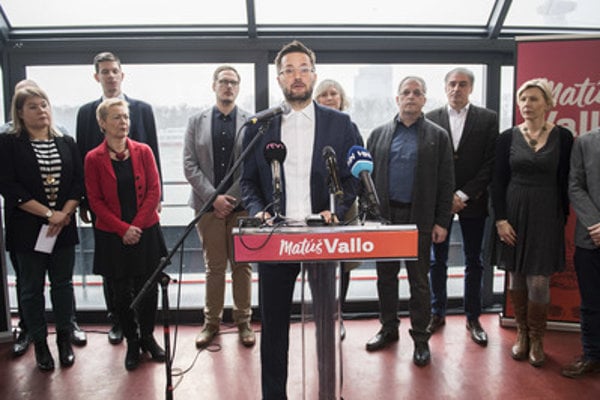 Matúš Vallo is the first official candidate running for Bratislava mayor in the local elections due to be held in November, the TASR newswire learnt on February 13. He made the announcement at a press conference in Bratislava, adding that he would run for the post as a civic candidate with the support of an expert team working under the name Team Vallo.

The architect-activist-musician wants to make use of the team’s more than two years of experience on a document called the Bratislava Plan – A Guide for a Better City, on which his election programme will be based.

“A plan for a better city has been created, and I decided to run for the mayoral post to facilitate its implementation,” Vallo said, as quoted by TASR.

The Bratislava Plan will be a publicly accessible document in twelve chapters. It should be published within a few weeks and available in book form, too.

Candidate comments on his hometown

Bratislava is a beautiful city, but it has been facing problems that have not been resolved, according to Vallo. It does not make use of its advantageous position on the Danube River and at the foot of the Small Carpathians, nor does it work with its interesting history, and fails to benefit from the potential of the interesting and motivated people living in the city.

“Bratislava needs a city management and mayor who lives with the city, knows its problems and, most of all, sees the big opportunities that haven’t been used,” Vallo noted, as quoted by TASR.

Therefore, he wants to focus on public spaces, the environment, transport, the regulation of construction development, city development and people. Vallo further pointed out that he was born in Bratislava and has loved this city for more than 40 years.

“I have come to learn that it is better to propose well-working solutions than to criticise something constantly,” he explains, as cited by the SITA newswire. “I often heard that something is impossible, that it is complicated, that it cannot work. I refuse to get used to this. So I have founded the Bratislava Plan – anassociation of more than 60 professionals and experts on various urban problems.”

New initiative for the capital

Vallo is going into the elections with an expert team made up of his close colleagues from the Bratislava Plan initiative. These experts are ready to implement the plan, either as candidates for vacant posts at City Hall, or as experts he can lean on when implementing its measures. The team includes, for example, transport engineer Tatiana Kratochvílová, Bratislava’s former chief traffic engineer.

Vallo wants to finance his campaign in a transparent manner. He will raise the money and seek support from sponsors and the public.

“However, I won’t take money from developers or from anybody with money about which we have doubts concerning its origin,” he declared, as cited by TASR.

Matúš Vallo is an architect and urban activist. He is also a bassist and member of Para. He formed an architectural studio with his colleagues and created the Urban Interventions (Mestské Zásahy) project aimed at small interventions in the Bratislava interior, which should make its inhabitants’ lives more comfortable and pleasant, according to SITA.

Read more articles by the topic
This article is also related to other trending topics: Bratislava, Matúš Vallo, 2018 local elections