Ján Kuciak was writing, among other issues, about tax frauds concerning the Five Star Residence block of flats.

The Interior Ministry confirmed on the morning of February 26 that the investigative journalist of the Aktuality.sk website, Ján Kuciak, was found dead in his house, obviously murdered, the Sme daily wrote.

Kuciak, aged 27, graduated from the Department of Journalism of the Constantine the Philosopher University in Nitra (where he was also a postgraduate student), and had previously worked for the Hospodárske Noviny daily.

Later, he started to work for the Aktuality.sk website where he focused on investigative journalism, according to Sme.

Work as a motive?

Police President, Tibor Gašpar, confirmed the death of Kuciak and his partner Martina Kušnírová at a press conference. He added that their murder was probably connected to Kuciak's investigative work. Gašpar noted that Slovakia has never experienced such an attack on a journalist.

Kuciak wrote about investigative stories such as tax frauds connected with the Five Star Residence block of flats and shady businessman Ladislav Bašternák, a crony of top politicians of the ruling Smer party.

The murder has become international news. Reporters without Borders (RSF) condemned the murder and called on the authorities to ensure that “those responsible are punished”.

He is the second journalist to be murdered in a European Union country in the past five months, RSF wrote in a press release.

“An investigative reporter has yet again been murdered in a European Union country,” said Adès-Mével, the head of RSF’s EU-Balkans desk. “We call for an investigation in order to establish the exact circumstances of Ján Kuciak’s death and we demand that the authorities shed all possible light on this case, especially as he and those close to him had been threatened in recent months.”

This is the fifth case of a journalist or journalists being murdered in an EU country in the past 10 years, RSF pointed out. Investigative reporter and blogger, Daphne Caruana Galizia, was murdered in Malta on October 16, 2017. Seven Charlie Hebdo journalists were massacred in Paris on January 7, 2017. Greek radio station manager, Socratis Guiolias, was gunned down with an automatic weapon outside his home in 2010. And Croat newspaper editor, Ivo Pukanic, was killed outside his newspaper by a bomb planted next to his car in 2008.

Editors-in-chief of major Slovak newspapers and news broadcasts also condemned the deed. They promised to continue reporting on topics covered by Kuciak, and at the same time called on the state to create safe working conditions for journalists.

“The murder of a journalist is a serious sign that crime is turning against one of the most important pillars of freedom: freedom of speech and the right of citizens to control those in power and those who disrespect the law,” reads the joint statement.

Other news organisations shocked, too

The International Press Institute (IPI) also expressed its shock over the brutal crime.

“This killing, which comes so soon after last year’s assassination of Maltese journalist Daphne Caruana Galizia, is a terrible sign for journalism in the EU and underscores the risks that journalists continue to face, even in democratic states such as Slovakia,” said IPI Executive Director, Barbara Trionfi. “We must now double down on our efforts to protect the safety of journalists.”

The murder of a journalist is a crime not only against the victim, but also against society as a whole, she continued.

“It is the most direct way of silencing critical voices and depriving the people of their right to information, especially about the activities of those in power,” Trionfi added. The Slovak authorities must immediately investigate this horrendous act and send a clear message that attacks against journalists are unacceptable and that those responsible will be brought to justice.”

The Slovak Syndicate of Journalists (SSN) considers the crime not only an effort to stop Kuciak’s work, but also an unprecedented attack on independent journalism in Slovakia.

SSN told the criminal prosecution bodies and independent media not to be intimidated and continue in their work.

“This is the only way to send a message to the culprits of this horrific crime,” SSN’s statement reads, as quoted by the SITA newswire, adding we cannot let terror and violence win and push us several years backwards. “All of Europe is watching us and we have to prove that we are here to protect our rights that anyone tries to take away from us.”

Meanwhile, Slovak politicians have also expressed their sympathy for the families of the murdered journalist and his fiancée.

“I’m shocked and horrified that something like this happened in Slovakia,” President Andrej Kiska wrote on Facebook.

In his opinion, this cold-blooded murder needs to be punished.

“We have to find the culprits as soon as possible and secure the safety of journalists,” Kiska stressed.

The murder of these two young people should not have a place in society, said PM Robert Fico in his statement. If it is proven that the real motive of Kuciak’s murder was his investigative work, it would be an unprecedented attack on the freedom of the press and democracy in Slovakia.

“Since 1998, all Slovak governments have respected the role of media in Slovak society and considered freedom of the press an irreplaceable part of democracy,” Fico said, as quoted by Sme.

“We can’t be a country where journalists are killed,” Justice Minister Lucia Žitňanská said in her statement, adding she considers every murder a big tragedy, both personal and societal.

Interior Minister Robert Kaliňák said he was unhappy and crushed by the murder. He even interrupted his official programme and activities and returned to Bratislava.

“The Interior Ministry and the security forces will do everything to reveal the culprits of this horrific crime as soon as possible,” he said, as quoted by Sme.

Reward for catching the culprits

Moreover, Fico announced at the February 26 press conference that the government has allocated €1 million for information that will help catch the murderers.

The Interior Ministry has established a special line for people to report the information. People will also be able to call 158, anonymously.

“Anything that would help catch the culprits might be valuable, regardless of the motive it reveals,” Fico said. He also called on the opposition to stop abusing the case.

Last September, Ján Kuciak filed a criminal motion against another businessman, Marian Kočner, for threatening him, Sme wrote. Kočner owned a flat in the Five Star residence but later sold it. 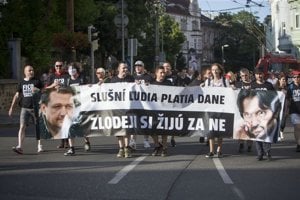 “Already, 44 days have passed since I filed the criminal motion against MK for threatening me, Kuciak wrote on Facebook in autumn. “And still, my case has probably not even been allocated to a specific officer yet.”

The journalist also wrote about the suspicious subsidies of a Smer crony, businessman Miroslav Bödör, the Slovak part of the Panama Papers, etc.

Most recently, Kuciak wrote that the Real Štúdio K.F.A company, which built the Five Star Residence and in which Kočner had a share, will soon disappear without the debt being repaid. He also revealed information on Ladislav Bašternák after information on an unjustified VAT return worth two million euros, which the businessman required to be repaid by state for the transfer of seven flats in this residence, worth €12 million, was leaked

No murders of journalists in modern history

The murder took place in the journalist’s house in the village of Veľká Mača near Trnava, some time between February 22 and 25. Kuciak was shot in his chest and his partner was shot in the head, the Denník N daily wrote.

Slovakia has no experience with the murder of a journalist in its modern history, although some journalists have disappeared and have yet to be found, Sme sums up.

Meanwhile, an initiative was created on Facebook, organising a march to commemorate Kuciak and protest against corruptive practices that still persist in society. The date is yet to be confirmed.

Two more events are planned for February 26, inviting people to light candles for Kuciak and Kušnírová. One will be held in front of the Aktuality.sk's publishing house, and the other on SNP Square in Bratislava. Candles will also be lit in Prague.