Judge in Kiska land dispute said if he was president, he would resign

President cites bias and hatred from the judge, who has had problems with the law in the past and planned to quit the judiciary. 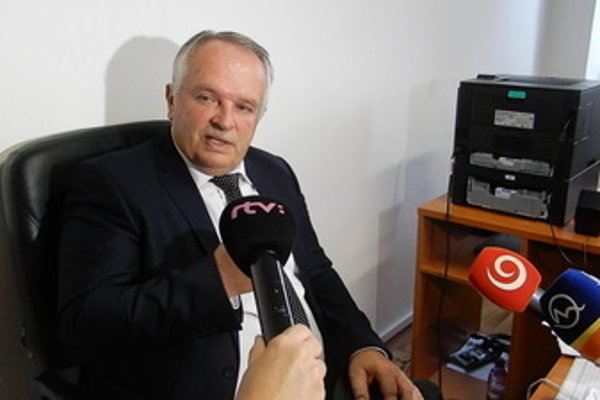 In a recent case Judge Miroslav Radačovský – who has been a party involved in a court case himself in the past – verbally attacked Slovak President Andrej Kiska.

On October 26, the judge, bringing the case to a close, ruled against Kiska in a legal dispute over land plots in Veľký Slavkov in eastern Slovakia and recommended that he consider resigning and leaving the country.

The case, assigned to the District Court in Poprad, concerned the ownership of a 1.2 hectare plot of land. The original owner, Jan Franc, inherited it from his father in the 1990s. Kiska, however, bought the same plot 20 years ago from Július Sirocký. Since then, the president has been convinced the plot belongs to him and Franc, never guessing that the ownership might be in dispute, even rented the land to a local cooperative farm, the Sme daily wrote on October 26.

The court decided in favour of Franc as the plaintiff.

It was determined that the plaintiff is the sole owner of the disputed land specified in the geometric plan, and the court stopped the proceedings regarding the defendant's obligation to draw up the geometric plan on the plot and also decided that the claimant is entitled to 100 percent of the legal costs, the spokeswoman for the Regional Court in Prešov, Ivana Petrufová told the SITA newswire.

“Let’s be objective.... Kiska acquired the land bona fide,” the judge stated in his ruling. “But to whom does the question of bona fide apply if both of them acted in good faith? If the court turned down the lawsuit, what would have happened? Mr. Franc would have legally lost his property and Mr. Kiska would have remained the owner. Would that be just? With this ruling, nothing in fact has happened, as the land will remain in the hands of the person it belongs to and Mr. Kiska is entitled to claim back his money from the person he bought it from.”

Radačovský then remarked that after losing this lawsuit the President would do better if he resigned and moved out of Slovakia – to one of his preferred countries, like the USA or Israel.

“If I was the president of this republic and any other judge found all the facts and connections that I did, I would resign the presidency, not vie for any other political position and leave for a country where I felt at home, such as the USA or Israel – and I don’t want to say that I do not highly respect the American or Jewish nations – but this is what I would do,” the judge said, as quoted by Sme.

The legal representative of the head of state, Ladislav Scholcz did not rule out an appeal.

“There cannot be any doubt that the state erred nearly twenty years ago when it properly approved all his legal acts, and therefore Andrej Kiska had no reason to question the validity of his ownership deeds,” Roman Krpelan, the President's communication advisor reacted, as quoted by the Sme daily.

“The President absolutely understands the emotions Mr. Franc's family would feel if they were to unjustly lose this plot. His feelings would be the same. The president respects the decision of the court, but the judge saying that he should move out of Slovakia surprised him. President Kiska is therefore considering further steps regarding this judge’s obvious bias and hatred towards himself and the inconceivable attack, which also harmed the positive decision for Mr. Franc’s family.”

Judge had past history with cocaine and arms

Judge Radačovský is a famous figure of Slovak justice. He was part of the five-member panel which gave the last death sentence in the country, the daily wrote. Moreover, he was also involved in a protracted, 12-year court proceeding for drug possession and illegal arms charges.

In July 1999, when coincidentally stopped by Košice police, he had 18 doses of cocaine on him as well as charges for a pistol and an illegally-owned hunting rifle. Radačovský claimed he found them in his son’s Košice flat and, trying to prevent him from getting into trouble, took the items and was about to get rid of them.

In the ensuing protracted trials, he was sentenced three times but numerous appeals prevented the verdict ever coming into effect and after 12 years he was ultimately found innocent. The Žilina Regional Court explained through its spokesperson in 2012 that the court was convinced that these deeds in this specific situation are not crimes. Also, the police officers changed their testimonies several times, which contributed to the final verdict.

In the meantime, Radačovský worked in his son’s companies – allegedly for free – and even claimed he did not plan to return to work in the courts, suggesting he would rather move to the Nagorno-Karabakh Republic, Sme wrote.

Judicial Council and Justice Minister Gábor Gál will evaluate whether Radačovský’s statement regarding Kiska was appropriate – and if they find otherwise, a disciplinary proceeding is possible. Gal (Most-Hid) will examine the statements, the Justice Ministry’s spokesperson, Zuzana Drobová, told the TASR newswire, adding that he will judge whether these words are reason to launch disciplinary proceedings against him.