Coalition demands the right of reply for politicians

Politicians ponder new provisions for the Press Code, Speaker of Parliament Danko wants to defend himself against op-eds too.

When the ruling Smer party gathered at its rally in Trenčín last December, their chairman, Robert Fico, threatened to end "media terror and lynch" journalists by means of reintroducing the right of reply in the Press Code. His intentions have since materialised into a draft amendment.

"The right of reply, as it is formulated now, is dangerous because it also arises in relation to true information," said Kutaš of the Media Institute, adding that a formulation, which would allow for the right of reply to be granted only in the cases of incorrect or incomplete information, is missing in the draft amendment to the Press Code.

Danko wants to reply to commentaries

Speaker of Parliament Andrej Danko (SNS) also supports the proposal. Besides Fico, Danko is the next politician to pick the media outlet and questions he will respond to.

"In addition, the proposal will be extended to commentaries and columns," Danko's spokesperson Tomáš Kostelník told Sme.

Danko refers to the developed countries and the European Union, where he says such a law is a matter of course.

"Columns and commentaries are journalistic genres, which can also contain factual claims," said Kutaš, admitting he has no idea what Danko meant by his statement. "However, if he confuses it with judgement, it is absurd." 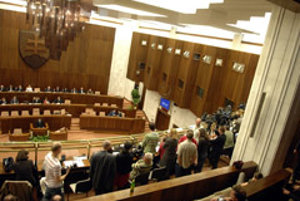 It is hard for Kutaš to imagine how a politician would defy a commentator's opinion. In other countries like the Czech Republic, the right of reply morphs into the right of correction, Kutaš added.

The International Press Institute has pointed out, for example, the USA does not recognise the right of reply and media outlets should be free to decide what they will and will not publish.

Haraszti: Courts do not accept the right of reply to opinions either

Smer approved the right of reply within the Press Code in 2008. The then-culture minister Marek Maďarič, who recently left Smer, submitted the bill to the parliament.

In protest of the law, Slovak dailies published blank front pages in 2008. Although Fico pledged the law was not meant to serve him or other politicians, he used it in 2009, demanding the right of reply to a commentary in Sme.