The places in Slovakia that will entangle your mind

Peter Dlhopolec
Getting enchanted by a witch is just one of many trick-art attractions at the Tricklandia gallery in Starý Smokovec in the High Tatras region. (Source: TASR)

The upside-down house and lands of visual tricks in the High Tatras have become popular sights.

Several towns in Slovakia have become home to sites that play with people's senses, providing them with somewhat otherworldly opportunities.

Spectacular Slovakia travel guide writers visited most of these venues where real and virtual reality overlap.

Maybe not virtual reality but definitely a world that has turned upside down, which people can experience near Liptovský Mikuláš, central Slovakia.

While tourists in Poland have been excited about an upside-down house in the town of Szymbark, northern Poland for a decade now, its Slovak counterpart has been playing with visitors' minds since 2016. It stands by the road in between Liptovský Mikuláš and Liptovský Trnovec, central Slovakia. The steel-frame house, which is anchored on a concrete base and tilts by 12 degrees, catches the visitor's eye not only due to its construction but for the many different items attached to the outside walls of this Liptov attraction.

Tourists may see here a smaller replica of the Statue of Liberty, a helicopter, and a communist-era police vehicle, once used by the secret police. An aircraft and another helicopter, which people can enter to experience what it is like to be a pilot, can be found at the site as well.

Several rooms make up this two-storey house; a toilet and a kitchen are located right above people's heads. Also, there are characters from different fairy-tales, including Snow White and the Seven Dwarves.

It has been quite an experience to the many that have already visited the spot. Yet, they compared it to a state of tipsiness.

“I was feeling dizzy,” said Petra Búciová. She most enjoyed the constant feeling that everything would soon collapse.

The idea of building such a house, and one of the most visited venues in the region at the same time, is a critical reaction to how the state functions.

“This attraction was created, because not only in our city, but also in our country many things work upside down, the other way around, and unaccountably,” said Cyril Fogaš, the house's founder.

The opportunity to shrink to the size of a chameleon, hamster, and ant is offered by the LaborARTórium, a gallery in Spišská Nová Ves, eastern Slovakia.

To experience this, although some may even wish to be transformed into one of the above-mentioned animals, people have to make a reservation.

The creators of the project, Peter Piroch and Ľuboš Potok, are Spišská Nová Ves locals who wanted to return home from abroad.

"We consider this art to allow people feel something they cannot experience anywhere else," Piroch said.

Those who want to meet a hamster in an aquarium will be shrunk 17 times. They then can try a running wheel and hide inside Swiss cheese to name a few hamster activities. Yet before visitors start enjoying this experience, they have to enter the room with a shrinking machine.

Afterwards, the first animal stop is a vivarium with a chameleon. People are shrunk 15 times to be the size of this lizard. In another room, where people are shrunk up to 330 times, visitors can get on the ant before they enter the aquarium with a hamster. 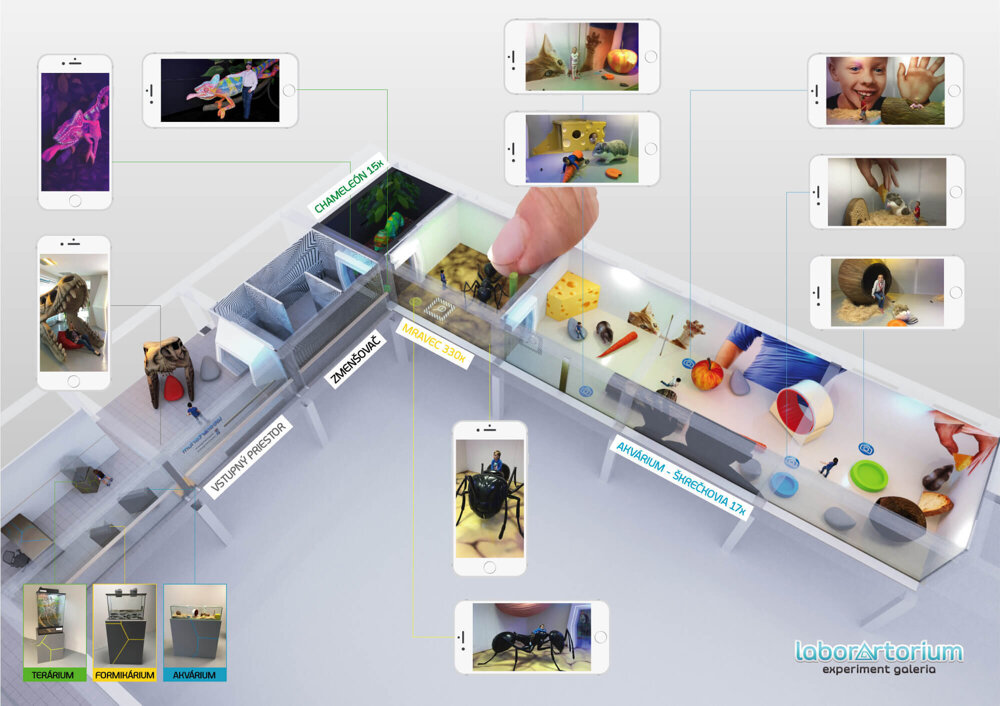 People praise the idea of this project on and outside Facebook. Besides the experience, visitors can even take photos to keep their memories of becoming, say, the hamster-sized people in the LaboARTórium for a moment.

A similar attraction can be found in the Luminous Dome in Ždiar, located in the Belianske Tatry mountains, where the secret life of animals is uncovered in a green igloo. Visitors can, for instance, see an oversized grasshopper, ant, butterfly, and spider. 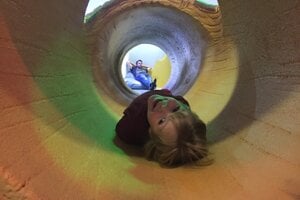 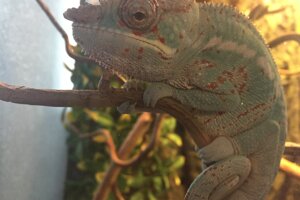 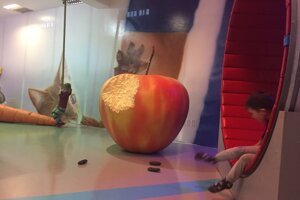 In the land of visual tricks

Recent university graduate Michaela Podolinská discovered the trick-art world thanks to an online advert and immediately took exchange university students with her to experience it. The unusual Tricklandia gallery, full of visual tricks and optical illusions, is set in the picturesque village of Starý Smokovec, surrounded by mountains.

Children and grown-ups can spend at least one hour here, discovering 24 visual-art stops: trick-art paintings based on augmented reality, a mirror maze, and anti-gravity rooms.

“I liked the anti-gravity rooms,” Podolinská stressed. Many of the Tricklandia attractions are based on Slovak legends and fairy-tales, as well as on Slovak towns and castles. 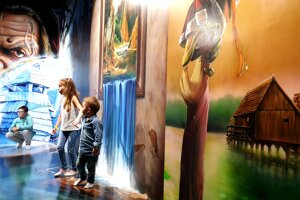 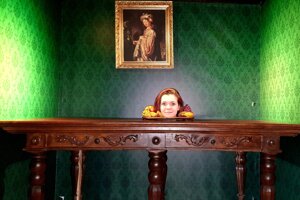 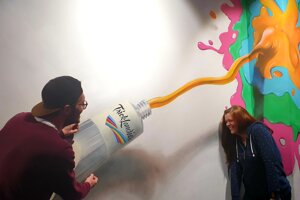 Just like in the case of LaborARTórium, people have to make a reservation to visit Tricklandia. Only then can they enjoy an upside-down chamber and the feeling of being captured in a witch's ball.

The tour around this gallery, filled with funny moments, begins in a rotating cylinder and anti-gravity room. Later, visitors can proceed to the beautiful paintings that are brought to life by visitors if they download a mobile application.

In addition, visitors can find a titled description by each stop, which tells them how to pose to make the best and memorable pictures.

“Great fun and a great team of young people, who are willing to help you capture these moments with a camera,” Katarína Chromčíková assessed the Tricklandia.

The Magical Woods, which is the name of a mirror maze in the gallery, is another attraction out of which there is no easy way out. Visitors can also become interested in the dark room with an infinite number of stars, a submarine, a magical library, and an opportunity to milk a domestic animal.

A similar site, which plays with people's minds, is the ILUSIA gallery in Liptovský Mikuláš, where visitors can make a phone call from the bottom of a pool and read newspapers on the top of a skyscraper.

Another mirror maze and the House of Illusions are located in Bojnice, western Slovakia. It is a place that offers a virtual reality experience. Kvantarium, which is a gallery of lightning effects, is set just below Hrebienok Peak in the High Tatras region. Moreover, Bratislava's Multium conceals the Universum room. It is a place in which visitors are taken away from the Earth and set in the realm of the endless universe.

Another unusual gallery is set in the village of Tatranská Polianka in the High Tatras region. The people who established Tricklandia also decided to open up the Poliankovo gallery. 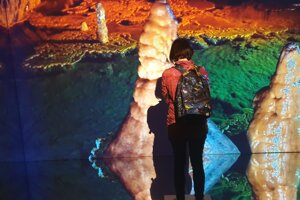 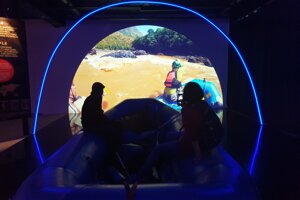 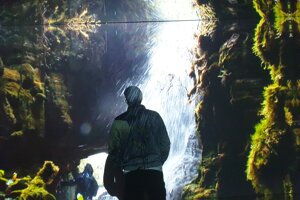 The unique Poliankovo, opened in March 2019, brings the art and digital technology together: 3D projections and holograms. Today, there are 10 projections, which take visitors on a journey around the globe. Additionally, the gallery founders have promised to come up with some more.

Visitors become adventurers due to the permanent exhibition by documentary filmmaker Pavol Barabáš, named Dialogue with the Planet. They can raft down the Omo River in southern Ethiopia and discover the inaccessible Domica Cave; all that as a result of modern technologies and props.

“We opened up something new in Tatranská Polianka; visitors will have the chance to find out, due to technology, what it feels like to be standing in the highest waterfall on Earth and walk across the North Pole,” Marián Bizub, one of the creators behind the Poliankovo idea, said.

The gallery has become a popular stop for school trips, as well.

“The pupils were all excited,” teacher Božena Janovová-Krempaská wrote on Facebook about the May visit to Poliankovo. She emphasised “meaningful quotes forcing people to reconsider a connection with nature”, Barabáš films, and animated artworks by Ľubomír Korenka.

Jump off a skyscraper

Similar to Bruce Willis, who tries to save the planet from an approaching asteroid in Armageddon, visitors to the VRBA bar in Bratislava can experience a very similar thing.

The bar is the first spot in Slovakia that offers an escape room based on virtual reality. Visitors driven by adrenaline can find out if they are able to bring the rescue mission of the Eden space station to a successful end and return to Earth.

The venue, which boasts 40 virtual-reality games and eight gaming devices, enjoys only positive reviews on Facebook. The TripAdvisor travel platform recommends it, too.

Globetrotters can virtually visit the bottom of a moat, as well as Mount Everest, and observe the night sky in Manhattan during the bar visit. Others can try to prepare meals at the restaurant and fix a car.

The bar also provides space, strategic, music, sports and artistic games. Moreover, the bravest visitors can climb into a roller-coaster and jump off an 80-storey skyscraper.