Slovak translator: The English are still afraid of Slovak literature

Translator Júlia Sherwood talks about the challenges of introducing English translations of Slovak literature to the book market. 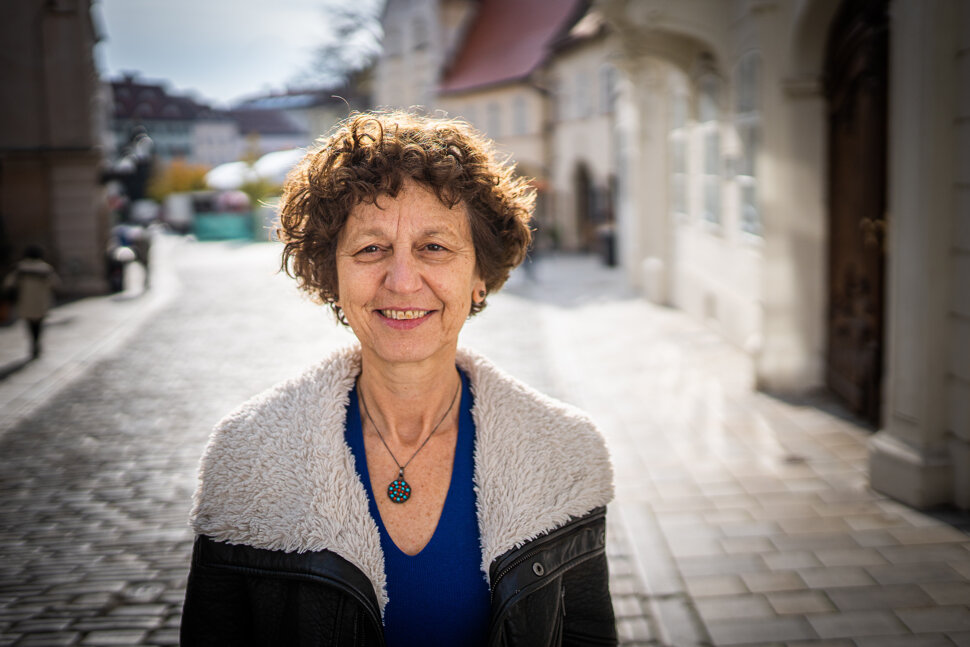 English speakers do not feel the urge to let translated books enter their market, they feel self-sufficient. Translator Júlia Sherwood has been trying for years to persuade English publishing houses to give Slovak writers a chance.

She has translated pieces by Vilikovský, Balla and Krištúfek, and seeks ways that would work for publishers. Although Slovak literature will never make it to the bestsellers list, it deserves a place abroad, she said in an interview with the Sme daily.

Is there enough Slovak literature in the world? Do they recognise us yet?
Unfortunately, we’re still at the very beginning. When I started translating in 2008, only about 15 works of fiction had been translated into English, with six published after 1989.

Since then, the number has increased to over 30. Is it enough?
This is a huge improvement compared to what the situation used to be like. The pace has picked up, gradually, but it still isn’t adequate to the number of great books that would be worth translating.

The main problem is finding publishers willing to popularise the literature of a country whose culture isn’t yet widely known.

Why?
Mostly because we don’t have so much to build on in the English-speaking world, unlike Czech literature. Every better educated person will have heard of Hašek, Čapek, Hrabal, Kundera or Havel, at least.

Slovak literature doesn’t have comparable big names that people would immediately recognise and that would help put contemporary authors in a wider context. Moreover, translations of the classics of 20th century Slovak fiction are still missing.

Don’t you want to translate these classic works?
I didn’t actually study Slovak literature and so I’ve focused on contemporary titles that resonate with me and reflect the reality I know.

But I’m not saying I wouldn’t ever translate classic works, particularly more modern ones, in the future. For example, I’ve been trying hard to find a publisher for Nylonový mesiac (The Nylon Moon) by Jaroslava Blažková. I think the book is still very relevant.

But it’s even harder to place older works since publishers prefer contemporary authors they can actually invite to events. This is an essential part of the present-day literature “industry” – festivals, readings and meetings with authors. This is what attracts audiences.

There are some publishing houses that try to look for and publish forgotten gems of literature. The choice depends on the publishers’ personal taste. The book needs to resonate with them. Some are trying to build a series, where the titles fit in with one another.

How did Slovak literature develop after 1989?
I would say that in the first years after 1989 many authors welcomed the freedom of expression and the chance to write about political issues that had previously been taboo.

To begin with, some also wrote about life and problems under communism. Then a kind of new liberation came: writers started enjoying the freedom to write about anything they wanted, and not to focus on politics. They were able to write about more abstract issues and embark on formal experiments.

Another interesting trend in Slovak literature is the proliferation of women authors. They have always been around, of course, but their increased number is a significant feature of the new era.

Some of them came to create a sub-genre known as “expat literature”: young women writers who reflect on their own experience of living abroad in their works. These include Ivana Dobrakovová, Zuska Kepplová and Svetlana Žuchová.

More recently, some authors who used to focus on more abstract themes are increasingly turning to critically reflecting on contemporary realities. Balla is a good example.

You have translated books by the new generation of Slovak authors, with three translations published this year: Big Love by Balla, Bellevue by Ivana Dobrakovová, and The Night Circus and Other Stories by Uršula Kovalyk. You also toured the UK with the Raising the Velvet Curtain project, presenting these books. How did the locals respond?
Although 30 years have passed since the Velvet Revolution, Slovak culture isn’t yet sufficiently recognised in the UK, even though there are many Slovaks living there.

That is why I decided to introduce a new generation of Slovak authors and artists to British audiences this autumn. Most people who attended the readings said they found it interesting to encounter a new culture and that they would follow it from now on. Many said they would buy other translations.

What was interesting was that few of the people who came to these events had Slovak roots or other ties to Slovakia, most of them were Brits.

How can interest in Slovak authors be increased?
I really hope that my collaboration with a literary PR professional on this project has helped increase interest. I can see it beginning to pay off, as more reviews of the recent translations are being published. Before, it was an achievement if two or three reviews of a translation of a Slovak book were published.

By contrast, each of the three translations published this year has already had five or six reviews, with a few more in the pipeline. This is quite unprecedented. I really hope that it will also be reflected in the sales.

There is also the long-term trickle effect: for example, our translation of Peter Krištúfek’s The House of the Deaf Man, published in 2014, keeps being sold. According to the publisher, the sales are comparable to those of books by some British authors.

How do you choose the books you translate?
I choose them mostly based on my personal taste, and then I approach publishers. I also cooperate with the Literary Information Centre in Bratislava, which sometimes selects the book. In that case, the publisher will approach me or another translator. Most Slovak authors are keen to have their books translated into English as that also opens the doors to publication in other countries.

The English-speaking market is generally not very open to books in translation. Their share on the British market accounts for only about 3 percent. Why?
The British and the Americans don’t feel any great urge to get to know literature from other countries. They have their own writers whose works are translated all over the world.

In Slovakia (as in other smaller countries), on the other hand, we have always been more curious about the world, wanted to discover what foreign authors write about.

However, more recent statistics show that the share of translated fiction has increased from 3 to nearly 5 percent. Also, in the past, publishers avoided drawing attention to the fact that a title was actually a translation. They were afraid that this might discourage potential readers.

This has changed, particularly following the success of Scandinavian crime fiction, as well as authors who have made it into the mainstream, such as Elena Ferrante or Karl Ove Knausgard.

Of course, publishers have to be guided by commercial considerations and if they don’t feel a book will sell, they simply won’t publish it. So the burden falls on small independent publishing houses that are used to managing on grants and don’t primarily pursue profits, although, of course, they want to avoid making a loss.

On the other hand, these small publishers often lack the capacity to promote the books properly. Another challenge is the small pool of translators.

Slovakia doesn’t have literary agents who could promote translations in the UK. Why not?
I don’t know. In Slovakia, copyright issues are handled by LITA and the Literary Information Centre also represents authors, but it’s not the same as having someone whose sole job it is to negotiate with publishing houses. Moreover, some big publishing houses communicate only with agents and won’t respond to direct submissions from translators.

It seems that Slovakia now has more writers than readers. How can one distinguish good authors from those of a lower quality?
It is probably beyond anyone’s power to read everything that is published. I often turn to Anasoft Litera for guidance and look at the shortlisted books, then choose to read those I think have the potential to captivate Anglophone readers based on their subject matter or the author’s style.

I keep trying to find the key to understand what will resonate with publishers. I have tried to focus on purely Slovak topics, but that isn’t interesting for some. On the other hand, when the theme is too general, the response is that it isn’t sufficiently specific. I guess the balance is somewhere in between. I proceed by trial and error.

For example, initially I thought that Dobrakovová’s novel Bellevue wouldn’t attract a publisher’s attention since the story takes place in France. But once Jantar Publishing published the book, many reviewers noted that the main character’s story does also reflect Slovak conditions, and they were particularly interested in the scenes set in Slovakia.

It’s also about capturing the spirit of the day: nowadays, attention is starting to be paid to women writers whose work has been underrepresented in reviews and also in translations.

Some people believe that Slovak literature is read only by reviewers and other authors. Is it true?
I wouldn’t say that. But it is a fact that even many of my friends in Bratislava don’t read Slovak authors. Some started reading them because they were wondering what I’m spending my time on. However, what is known as literary fiction will always remain a minority affair.

But I do believe that Slovak literature deserves a place on the British market, just like, for example, works by authors from the Baltics. I don’t expect these books to be bestsellers, but people interested in central Europe ought to have a chance to read them.

You could study at university only after emigrating. You’re currently a translator and a promoter of Slovak literature abroad. Was it a difficult journey?
It wasn’t a straightforward one. Originally, I wanted to study translating and interpreting, but I was denied access to higher education for political reasons and was able to study languages only in Germany and the UK. I didn’t devote myself to translation at first: for many years, I focused on human rights, working for Amnesty International.

The turning point came when I moved to the US with my husband. He was appointed professor at a university there. I didn’t have a work permit but I didn’t want just to sit around doing nothing so I started translating.

What did you start with?
I started translating journalism and essays and then turned to literary translation. Since we were financially secure, there was no immediate pressure on me to earn money.

So I was given a great opportunity to start a new career in mid-life and after returning to the UK, I decided to continue because I enjoy it very much. Another thing that drives me is sheer stubbornness – I don’t give up that easily. For example, it took me three years to find a publisher for Balla’s novella In the Name of the Father.

Don’t you want to start writing yourself?
Not really. I enjoy the challenge of understanding how an author thinks, finding the right style and register, reproducing their voice and finding the most adequate expression for it in English.

What do you find most difficult?
One thing I feel less comfortable with are such fast-changing aspects of language as colloquialisms and slang. I came to the UK as an adult, quite late to be fully at home in the full breadth and depth of linguistic registers.

This is why I translate into English with my husband. He gives the translations the depth and richness, the all-important polish. And since we work as a team, I always try to find books that appeal to him as well. I don’t want to take on a translation of a work that he can’t relate to.