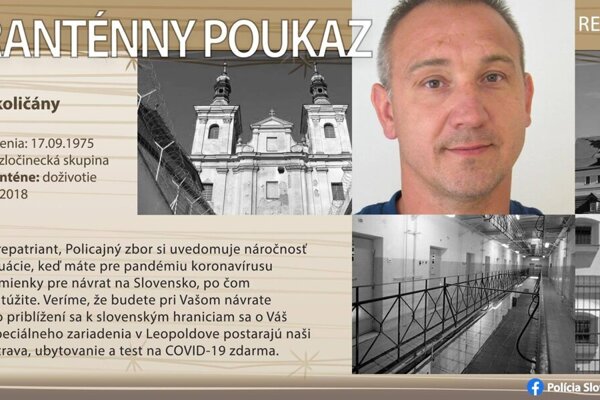 The five most wanted Slovaks are featured in a special campaign the police have launched on Facebook and Instagram. The campaign is a response to the coronavirus pandemic in Slovakia and the world.

The police came up with virtual vouchers for “special state quarantine in Leopoldov” stating other conditions and advantages.

Leopoldov is a municipality in western Slovakia with one of the best-known maximum-security prisons in the country.

As the police stated on Facebook, the aim of the campaign is to increase public awareness about criminals being hunted down by the police, with the goal of gaining information leading to their arrest.

The first to be issued the so-called ID for life-long quarantine is for former mafia kingpin, 44-year-old Róbert Okoličány.

The quarantine vouchers should attract the attention of the public, who are invited to report any information they might have for the police about the suspects. Those with information can contact the 158 telephone number, report it in person at any police station, or even send a private message to the police Facebook page.

The quarantine vouchers follow last December's Christmas campaign, when the police published "Christmas cards" for the four most wanted Slovaks.

More than 500,000 followers saw the information on Facebook, increasing the chance of gaining new information.

The police say the Christmas campaign contributed to the January arrest of a top member of the mafia group takáčovci Henrich Sz., who had been wanted for more than three years. There were hints that he may have died.

“We believe that our coronavirus campaign will bring a similar, if not better result,” said Jana Maškarová, vice-president of the Police Corps, as quoted by the SITA newswire.