Orava natives cheesed off by Polish competition for beloved wares

NORMALLY the most amicable of neighbours, Slovakia and Poland seem headed for a collision over bragging rights to traditional cheeses made in Orava and the High Tatras mountain region. 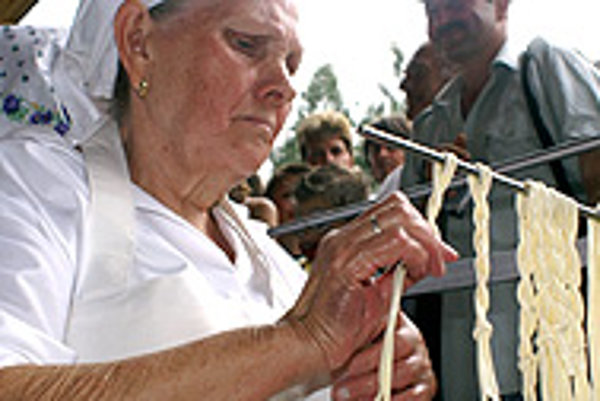 Font size:A-|A+
NORMALLY the most amicable of neighbours, Slovakia and Poland seem headed for a collision over bragging rights to traditional cheeses made in Orava and the High Tatras mountain region.

On February 5, Poland submitted a bid in Brussels to have oscypek cheese registered on the EU's list of protected traditional products, which includes entries like Roquefort from France and feta from Greece. Oscypek is a specialty of the Podhale region in southern Poland.

However, Slovakia, which has made the same cheese for centuries in its northern High Tatras region under the name oštiepok, protested. As a result, the EU gave the two countries six months to work out their differences. If no deal is reached, the EU will decide who gets title to the smoked sheep's milk cheese delicacy.

The protest was submitted by the Industrial Property Bureau and several cheese makers in Slovakia. The winner of the dispute will get the exclusive right to call their cheese oscypek, or oštiepok, as the case may be.

A battle is also looming over korbáčiky, the salty and stringy cheese made in the Orava region around the village of Zázrivá.

"Korbáčiky have been made in Zázrivá for as long as anyone can remember," said Zázrivá Mayor Jozef Kazárik. "The producers never imagined that it could one day be different, that someone could take away their traditional product and force them to take measures. After all, it's part of our historical heritage."

Poland has not yet requested that its version of the cheese be registered as a protected trademark, but both sides are arming themselves with evidence that they were the first to make korbáčiky.

Local producers have launched a civic foundation called Zázrivský Korbáčik, and are combing local archives and business records for proof that korbáčiky were made in Orava before the Poles followed suit.

There's only one problem, however - documents from the early 20th century refer to cheese makers in general, and do not specifically mention korbáčiky. Furthermore, korbáčiky back then tended to be made in households rather than on an industrial basis, meaning that no special machines were involved that could be brought forward as evidence. By comparison, wooden forms for making oštiepok from the 19th century have been found in Zázrivá.

Korbáčiky makers are also in touch with the Dairy Research Institute in Žilina, which is compiling a Slovak recipe for the product, as well as a list of defining characteristics.

Korbáčiky producer Jana Mangincová is optimistic. "You can tell Polish korbáčiky by the way they make it, which is entirely by machine - they have no tradition of making it by hand," she said. "Such machines have been around for 15 years at the most. Here, many of us have a family tradition of making korbáčiky. For example, I learned it from my grandmother, and she was taught by her mother.

"The tradition is clear, it's just a pity that they wrote 'general cheese manufacture' on the trade licenses of the time, so that the license would allow them to make a wide range of products. I don't have korbáčiky listed in my trade license either."

Mangincová said she was angry at the prospect of Poland applying to the EU for the rights to make korbáčiky.

"It's as if I bought a machine to make krowky [a traditional Polish candy] and tried to have it registered in Brussels regardless of the fact that the Poles have been making it for hundreds of years."

However, not everyone is pushing the korbáčiky panic button.

"I have been watching with disapproval the fuss that is being created around korbáčiky," said Professor Stanislav Šilhan from the Dairy Research Institute. "The media are presenting it as some sort of scandal, that the Poles want to steal our korbáčiky, but that's not the way it is. The EU's quality system is not about who registers something first, but about demonstrating a clear tradition and quality that is higher than that of other manufacturers.

"We are working on securing evidence that Slovakia has a tradition of making korbáčiky. Trade licenses are not the only forms of proof that exist - there are also historical records, personal correspondence, literature and fairy tales. We have evidence that korbáčiky were made before the war.

"If the Poles try to register the product, we will protest, although they might protest themselves if we try to register it. Either way, it's about finding an agreement, not about taking something from each other.

"By the end of February we will have a list of traditional characteristics ready, and we will consult it with experts. Then we will send the material to Brussels. It could be that the protected korbáčiky region will eventually include both Orava and a part of Poland.

"I think in the end this is good for us, because it at least gave a wake-up call to korbáčiky makers, who were evidently fast asleep. I've been trying to get them to register korbáčiky for years."

The village of Zázrivá is over 400 years old. The original settlers farmed sheep, and later cows; their dairy products became known far and wide.

At first, only a few families in Zázrivá, for example the Piklovci, knew how to make korbáčiky. The best were always made from sheep's milk. They heated the milk to 30-35 Celsius and added rennet. When the cheese settled, they added hot water and let the mixture stand. Then they poured off the curdled milk (žinčica) and left the cheese in a warm place. Finally, they put the cheese in containers with hot water and stretched it by hand into thin cords, which were put into another container with cold water and a salty gelatine. The gelatine was prepared by boiling water with salt, and then adding more salt. When the mixture thickened, it would again be boiled and left to cool.

In order that all the korbáčiky be the same length, the cheese cords were wound around wooden frames 20 x 20 cm square, or around 20 x 42 cm rectangles, or even around plates. Each cord would be split at one end into three or four thinner cords, which would be woven together, and then tied at the bottom so they didn't come apart. Korbáčiky used to be smoked like oštiepok, but that has since fallen out of fashion.

A good korbáčik is traditionally made by hand, because machines do not have the necessary sensitivity that human fingers do, and that is exactly how they are made today in Jana Mangincová's house. The women start by cutting up the cow's cheese they have bought from another producer. They put it in water that is about 80 degrees Celsius, but they mix it around with their hands as if they were washing their hands in the sink. They stretch it out to see if it has the right consistency. At this point these cheese is natural and has a sweet taste - there is not a grain of salt in it.

The thick cheese is then passed to a colleague, who pulls a continuous cord from it called a vojka. The vojka is placed in a wash-basin with the salty gelatine. The cord is then wound on a frame and put in a container with salted water. Usually, each frame will contain a cord about 500 metres long.

In another room smelling of smoked cheese, korbáčiky are made and twined into braids. The women weave the korbáčiky one after another, with each taking no longer than a few seconds.

A Zázrivá korbáčik would not be recommended by your doctor - it contains too much fat and salt, even though less salty versions are available. Throughout the year, but especially in the fall, you can find women selling korbáčiky along the highway through Zázrivá from Terchová.