May Day celebrated in style 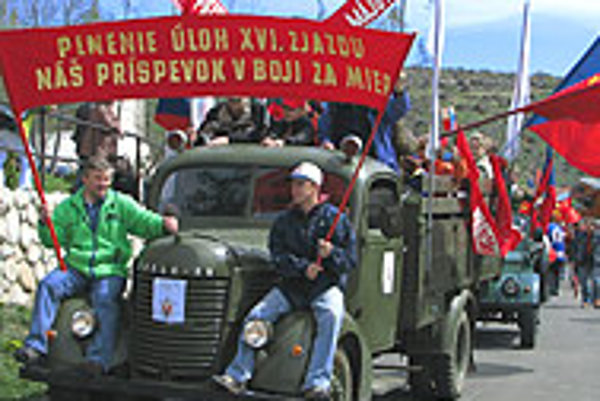 The ruling social-democrat Smer party's programme for the day was the richest out of all the political parties'. On Saturday, April 27, Prime Minister Robert Fico had already set off on a tour around Slovakia to meet and greet the citizens, visiting towns and raising traditional maypoles.

In the past, young men raised maypoles - stripped tree trunks decorated with ribbons at the top - in front of their beloveds' homes as a sign of affection.

Fico's speeches in the towns focused mostly on the upcoming revision to the Labour Code. He emphasized that its purpose is to support employees and workers.

"Our goal is to guarantee our workers a position that is appropriate for Europe, not Latin America or Africa," he said at a rally held in Nitra during his tour.

The rally was attended by about 500 people and included a brass band, cheerleaders, free goulash, beer and wine.

Fico completed his tour in the town of Hlohovec near Trnava. "Over the last four days we have driven around 2,000 kilometres," he said. "We spoke with hundreds of common people, from young people to the oldest generation. These days gave me, my deputies and the ministers a deeper understanding of the needs of our

citizens and ideas of how to solve their problems. I also got a good feeling of the citizens' support for the current government."

The opposition Slovak Democratic and Christian Union (SDKÚ) decided to celebrate May 1 as the third anniversary of Slovakia's admission to the European Union. Party head Mikuláš Dzurinda cycled along Dunajská Hrádza, a popular bike path that runs along the Danube from the Old Bridge in Bratislava to the outlying village of Čunovo.

Dzurinda said the increase in jobs has confirmed the importance of European integration. "Jobs for 85,000 people were created last year," he said.

The Confederation of Trade Unions, a traditional organizer of May Day rallies honouring workers, held only one rally this year. At the pro-government rally in Banská Bystrica, around 1,500 unionists turned up in support of the revision to the Labour Code. This was the first time since 1989, the Sme daily wrote, that trade unionists did not use the opportunity to protest against the government and attack the prime minister and his policies.

"If parliament adopts the Labour Code revision, it will finally be protecting employees and will return to them the living standards that the previous government stripped from them," said the confederation's president, Miroslav Gazdík.

About 200 pensioners joined a May Day celebration organised by the Slovak Communist Party (KSS) on SNP Square in Bratislava.

"This meeting proves that the KSS is alive in Slovakia, that it has its place here," said KSS leader Jozef Hrdlička. "After 1989 we see May 1 as an opportunity to express our opinion of what is happening in society."

Hrdlička added that his party is closely watching to see how Smer will meet its election promises.

KSS organized local rallies in other towns across Slovakia.

In Košice, where the KSS also served free beer to its supporters, the local organization supports Smer and the ruling coalition. The Košice rally had around 500 attendees, most of whom are members and sympathizers of the communist party.

Celebrations in Starý Smokovec in the High Tatras were unique, being a re-creation of the socialist celebrations as they were in the 1980s. Floats, banners proclaiming the eternal victory of socialism, red flags, portraits of Marx, Lenin and other founders of the regime, the enthusiastic cheering for the working public - nothing was lacking in the parade. Lenin himself, standing on a podium, pontificated over the parade.

However, not all celebrations focused on the worker and the socialist dream. Around 30 young right-wing extremists with shaved heads also met in Bratislava on May 1. They gathered in front of the presidential palace to protest Turkey's application to join the European Union. Then they marched, shouting extremist slogans, to Hviezdoslavovo Square and then to SNP Square. Here they held speeches, warning bystanders of the dangers of the 'Islamisation' of Europe.

Around 20 anti-fascists protested their meeting, but police did not report any incidents.