Surrounded by cardboard packing boxes in his Petržalka office, Citibank Slovakia's David Francis was in a reflective mood. In four years as the top executive at the country's largest foreign bank, Francis had worked with two governments and seen the best and worst of economic times. Due to leave the job on December 1 to accept a Citibank posting in London, Francis sat down with The Slovak Spectator on November 26 to offer his thoughts on the country's future.
The Slovak Spectator (TSS): You've been in your job for four years, and you've mentioned that you've seen some dramatic changes in the economy. Which ones have impressed you the most? 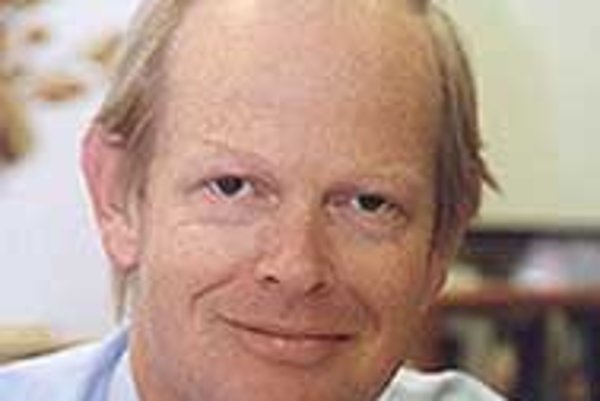 Font size:A-|A+  Comments disabled
Surrounded by cardboard packing boxes in his Petržalka office, Citibank Slovakia's David Francis was in a reflective mood. In four years as the top executive at the country's largest foreign bank, Francis had worked with two governments and seen the best and worst of economic times. Due to leave the job on December 1 to accept a Citibank posting in London, Francis sat down with The Slovak Spectator on November 26 to offer his thoughts on the country's future.

The Slovak Spectator (TSS): You've been in your job for four years, and you've mentioned that you've seen some dramatic changes in the economy. Which ones have impressed you the most?

David Francis (DF): There's clearly been a huge amount of change. Those of us who were right up front and involved on a daily basis may have difficulty seeing this, but if one steps back, it's clear. All the companies we deal with have become much more sophisticated in their understanding of the issues and in their approach, there's been great progress among all the international companies active in Slovakia, their management teams have much more depth, and Slovak institutions are now much more professional.

In terms of economics, when we started in Slovakia in 1995 it was really just at the end of the dip in economic performance. In the following four years, there has been just about 30% economic growth, which is a very significant figure. There's been a cost to this in increasing debt and various imbalances in the economy.

TSS: Do you think the cost of growth was too high?

DF: Things clearly got out of balance in 1997 and 1998 when the economy was to a certain extent artificially stimulated, and the new government when it came in was forced to deal with a situation that was serious and required urgent attention. They recognized this, and in May came out with a package of measures that were serious and brave. These measures were designed to address the main problems of the economy, which included an unsustainable current account deficit. This deficit had been financed by a rapid increase in debt, and there was no further potential to increase the debt. So there needed to be an adjustment, also to bring the government financing deficit down. These things have been largely achieved, and there is now a basis for macroeconomic stabilization. If the current policies continue to be implemented as we envisage, we should see stability developing in the next 12 months.

TSS: Much was written during the Mečiar government about political risk and how it was a barrier to investment. As a foreign bank doing business in this country, how did you protect yourself against this risk? Did you ever think of leaving?

DF: There was clearly very significant country risk building in Slovakia towards the end of 1998. The economy was out of balance, there were questions as to the abililty of the government to finance itself... So at one stage we were worried about the balance of payments position this year, and all of us that were active in the market then had to be very cautious about what we were doing.

TSS: There was considerable tension between the central bank and the government from 1997 to 1998. What is your impression of how the National Bank did its job?

DF: I developed great respect for the National Bank, both as an institution and for the senior figures there. They all did a very good job in very difficult circumstances, and Slovakia was often quoted as a model of how monetary policies should be successfully managed. When you remember that in 1993 there was no National Bank of Slovakia, this is one of the country's great successes, the development of its institutions. They've developed maturity, and come forward with models of how it can be done.

TSS: What about the National Bank's supervision of the banking sector? In a country where we have had caretaker administrations imposed on two banks - IRB and recently Priemyselná Banka - as well as a series of back-door privatisations, some analysts have said the NBS has not performed its control function very well. Would you agree?

DF: Banking supervision is an immensely difficult function. It was important for Slovakia to develop its banking system, and they needed to have local banks active in the economy. There really wasn't much knowledge and expertise in these new banks as to how to manage credit risk, market risk, and not necessarily much understanding of the role and responsibility of banks in a market economy, so it was obvious that there were going to be problems in the banking sector. The fact is that there have been far fewer problems here than in the neighbouring countries. The Czechs have had very bad experiences, there were widespread bankruptcies throughout the Hungarian banking system, so I don't view the record here as poor in comparison. Quite the opposite.

There's still more to be done - the banking system remains extremely weak, and it's a source of anxiety for us. There is a good plan in place to restructure and privatise the major banks, and it's vital that this plan be implemented as quickly as possible, and there will clearly be much change and consolidation among the small and medium sized banks. The Slovak banking system at the end of 2000 will be very different from what it is at the end of 1999.

TSS: You mentioned a lack of expertise at the NBS, but does this really explain the situation at IRB in 1997 when a major creditor was allowed to become a major shareholder?

DF: There has always been a very clear understanding at the National Bank of the need for pro-active supervision. But the fact is that in Slovakia from 1996 to 1998, it was very difficult to perform this function. I think that in the circumstances, the NBS did a very good job. We haven't had situations where there have been runs on banks, or where depositors have lost money, and this is quite an achievement.

TSS: What do you expect to happen in the economy in 2000?

DF: It seems to me that the battle for macroeceonomic stabilization is essentially won. There are debates on next year's budget, but these are within acceptable parameters. The battle now is to succeed with restructuring at the micro level, at companies and financial institutions. We need to ensure that situations such as VSŽ are resolved promptly, that the privatization of Slovak Telecom is achieved successfully. It's now decisions at individual companies, and it's some of these decisions that have proven particularly difficult for this government to take, given the fact that there are hard choices involved.

The other factor that will make the next 12 months difficult is the continuing weakness of the banking sector. There is very little capacity to lend within Slovak banks, and this credit crunch will continue for the next 12 months.

TSS: What role will the bankruptcy law that is nearing cabinet approval play in this process of micro-economic restructuring?

DF: It will be extremely important. In a situation with a weak banking system, where there is an obvious credit and liquidity problem, it is important that the banks that do have lending capacity are encouraged to lend and perform their credit function. In order for them to do that, they have to be satisfied that their rights as lenders are strong.

TSS: How much of what the government has learned about the economy has come from tough situations like the near bankruptcy of VSŽ?

DF: VSŽ has been in many ways a microcosm of eveything that went wrong in Slovakia in 1996, 97 and 98. I was out in Košice a few weeks ago, and I went to see all the limousines and cars [bought by the company's former management] that had been assembled. The bad news was that VSŽ had gone out and bought all of these Mercedes and BMW's. It was an obvious symptom of a kind of sickness. But the good news was that in the process of this restructuring, these cars had been taken away from their previous owners.

Part of the problem at VSŽ was caused by its extremely complex organizational structure. One of the other lessons we have learned from VSŽ is that complex organisations in Slovak companies will not be tolerated by banks going forward. Companies will have to have simpler organizations, more transparency and much better information gathering and dissemination.

TSS: Citibank has recently announced plans to get more involved with SME's.Why now, when we still don't have a functioning bankruptcy law?

DF: We are convinced Slovakia has a good long-term economic future, and we're geting ready for that. There's a lot of risk in getting involved in the small and medium sized sector, and we will need to be cautious. But the fact is that this sector will provide over the next five years much of the growth dynamic in the Slovak economy, which has so far been concentrated around a few very large companies.

TSS: You've said recently you want other foreign investors to draw conclusions from the faith you are showing in the country. What is the message you are trying to send?

DF: Citibank has over $60 million of capital in the country, which makes us one of the largest investors here, and that's is a very strong statement of our commitment. We hope by broadcasting our intentions, and acting as an ambassador for Slovakia to the foreign community, we'll draw the interest of other investors to this market.

For many of us who are involved in these processes right up front, we sometimes don't see the wood for the trees. But in many of my discussions with people from offshore, there is significant optimism about Slovakia, and there has been a real change in mood over the last six months. This is reflecting in the quality and number of visitors we have coming to Slovakia, both official and private, in the quality of press articles, in the cost of Slovak government debt Eighteen months ago, we were all worried about the increasing isolation of Slovakia. That's a thing of the past, and there has been tremendous movement forward, It's important, as we deal with our day to day issues, to keep that in mind.