Martin Kollár: The extraordinary behind the ordinary

Photographer Martin Kollár, 30, was travelling through Slovakia when he spotted a bonfire and crowd on a bare hill in the eastern town Spišská Nová Ves. He got out of his van, camera in hand, and approached the group, which was celebrating a national holiday.
But Kollar didn't photograph them singing the Slovak national anthem or reciting poetry. He turned instead to a bunch of people who, with their heads lowered and feet rummaging through the grass, were searching for a lost necklace. 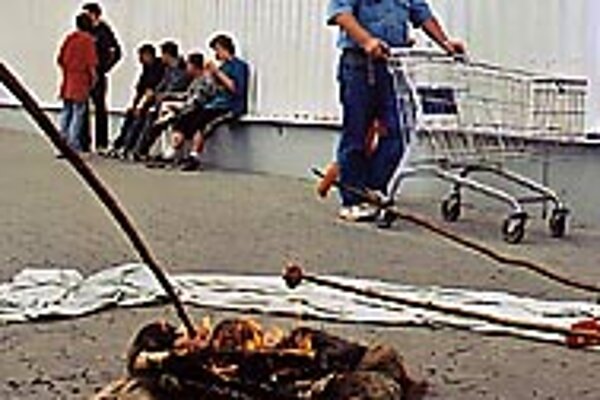 Font size:A-|A+0
Photographer Martin Kollár, 30, was travelling through Slovakia when he spotted a bonfire and crowd on a bare hill in the eastern town Spišská Nová Ves. He got out of his van, camera in hand, and approached the group, which was celebrating a national holiday.

But Kollar didn't photograph them singing the Slovak national anthem or reciting poetry. He turned instead to a bunch of people who, with their heads lowered and feet rummaging through the grass, were searching for a lost necklace.

That photograph hangs among 37 other colour shots of ordinary Slovaks in everyday situations in a new Kollár exhibition at Palffy's Palace in Bratislava. Entitled Slovakia 2001: A Pictorial Report on the State of the Country, it is the result of a project by the Institute for Public Affairs (IVO) think tank. The photos will appear in a book to be published December 4 alongside the IVO's 900-page annual Global Report on the State of Society. The idea was to give a pictorial overview of Slovak life.

"I visited events and strange competitions - but they didn't play a specific role in my pictures," Kollár said. "I focused on individuals doing something weird aside from the main action - on ardent facial expressions separate from what was going on around them."

"Martin best fulfilled our criteria - to avoid shooting extremes such as high ranking politicians or Roma issues," said Miroslav Kollár, of IVO, and no relation to Martin. "He takes pictures of the middle class, focusing on the ordinary man."

Kollár received the IVO's the scholarship in March and soon was behind the wheel of his 17-year old Renault van scouring Slovakia for "the most average of average Slovaks," people anybody could identify with.

He travelled mostly in his free time, but always kept a camera in his pocket, just in case something caught his eye. There were days when he went looking and found nothing, and days when he stumbled upon inspiration. In total he shot around 200 rolls of film.

"I was shooting nobody in particular," Kollár said. "I wanted to capture the current feeling of the country, so that anybody in ten years could say: 'Here is the country that existed at that time.'"

Slovakia 2001: A Pictorial Report on the State of the Country includes a striking picture of three tough-looking teenagers standing near a dead pig and smoking cigarettes. It was five days before Christmas in a Roma community in eastern Slovakia and nearly every family was slaughtering a pig. The yards were full of blood and the air smelled of roasting meat.

But Kollár shot the teenagers rather than those killing and cooking the animals. Since he never puts captions to his pictures, it is up to the viewer to imagine the circumstances outside the frame, which is the way he likes it.

"Every person reads my pictures differently. One can see in some of them the place he lives or the places he would like to live," said Kollár. "One might recall a similar situation happening to him. Some might be driven even further by their imaginations."

In another photo a man stands with a huge rubber canoe under his arm near a highway. Nothing in the picture explains what he is doing there. In another a farmer is lying on the ground in the woods with an expression that could be happiness, inebriation or serenity. One of the most striking photos depicts three hunters wading through a field of weeds armed with shotguns. Slovnaft's smokestacks loom in the distance and it's almost as though the men are mounting an attack on the oil refinery.

Kollár was born in the northern Slovak town Žilina and graduated in 1997 from the Film Department of the Academy of Music, Drama and Fine Arts in Bratislava with a major in photography. He films up to two 50-minute and four 15-minute documentaries a year and takes still shots for feature films.

His filming background has left visible traces on his photography, in which he condenses as much action as possible in single shots. Taken with wide lenses, his pictures are like self-contained movies, as in his photograph of a family roasting sausages over a fire in front of a large building. In the upper left corner we see the name of a popular hypermarket, establishing the setting; in the middle ground a man pushing a cart stares curiously at the family; and in the foreground, his face not shown, another man stands over the fire roasting a sausage, perhaps the father or grandfather. The viewer is left to invent the plot.

Although practically fresh out of college, Kollár's singular style has already won him recognition. Last year he took second prizes at the Czech Press Photo competition in the categories "Everyday Life" and "Art". He also worked for a project similar to his IVO work in Luxembourg, taking pictures of ordinary Westerners.

"My work is like a radio play," said Kollár. "There you listen to a story and imagine characters. Here you see the characters but create your own plot."