Slovakia's foreign policy has openly turned westwards since the new cabinet of Prime Minister Mikuláš Dzurinda took office in October 1998. Political analysts warn, however, that the path into the EU will not be without its thorns.
"The European Union is not the promised land, but it certainly is a community of closely tied economies which create a common market and today even a monetary union," said Ján Figeľ, state secretary of the Foreign Ministry and Slovakia's main negotiator for EU membership. Figeľ called the EU Slovakia's "only chance." 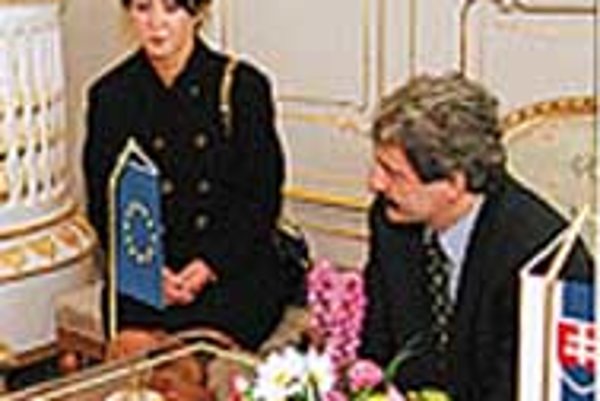 Font size:A-|A+0
Slovakia's foreign policy has openly turned westwards since the new cabinet of Prime Minister Mikuláš Dzurinda took office in October 1998. Political analysts warn, however, that the path into the EU will not be without its thorns.

"The European Union is not the promised land, but it certainly is a community of closely tied economies which create a common market and today even a monetary union," said Ján Figeľ, state secretary of the Foreign Ministry and Slovakia's main negotiator for EU membership. Figeľ called the EU Slovakia's "only chance."

But joining the EU, political analysts say, will require some difficult changes in the country's foreign and domestic policy. Among them, Slovaks will have to change some of their nationalistic beliefs and treat the Hungarian and Romany minorities equally. That may not be so easy, especially as the impetus to separate from the former Czech Republic and form a separate nation was closely tied to visions of ethnic Slovak-based nationalism.

The other major speed bump along the way to Brussels, state officials said, is adapting Slovak legislation to EU norms and making it function effectively in daily life.

The latest report on Slovakia's fulfilment of the Copenhagen criteria for EU entry, presented at the December 1998 summit in Vienna, was rather critical. The country was censured mainly for failures in applying basic democratic principles and human rights, especially towards minorities and ethnic groups.

After the first 100 days of the new government, however, several EU officials said that if the country follows a transparent foreign policy and takes an aggressive approach towards fixing its troubled economic situation, it has a real chance to be included in the first group of EU candidates at the December 1999 summit of the European Commission in Helsinki.

At a February 18-19 Foreign Investment Conference in Bratislava, Martin Bangemann, the Member of the European Commission for Industry, Telecommunications and Information Technology, gave a clearly positive signal to Slovakia.

"If Slovakia continues to move forward at a rapid rate there's no reason it can't become a member of the first group," Bangemann said.

Catherine Day, EC Director for Central and Eastern Europe, agreed that "no one can make predictions, but [Slovakia's inclusion in the EU entry vanguard] is a rational hope."

EC officials said they appreciated the political changes which had occured since the September national elections.

Walter Rochel, Head of the EC Delegation in Slovakia, said that the choice of Slovakia to become a member of the European community had met with a positive response from western European countries.

"It was up to Slovak society alone to choose its path. Personally, I'm happy that it chose the way to Europe," Rochel told The Slovak Spectator.

What these officials were not saying, however, was that Slovakia has a lot of work to do before it ever actually joins the EU.

Miroslav Kusý, a political scientist at Comenius University, said that one of the greatest difficulties is the way Slovakia's international reputation was handicapped by the government of former Prime Minister Vladimír Mečiar over the last four years.

"Slovakia has had a very bad reputation abroad since it was founded in 1993, and no wonder, as the founder was Mečiar himself," Kusý said.

He explained that Mečiar's model of a state based on the nationalist principle of a Slovak majority was unacceptable to the European Union. Most of the countries in the EU, Kusý said, followed multi-national and multi-ethnic principles.

"Slovakia's transformation into such a society will be a long and difficult process," he said.

Milan Resutík, a former diplomat and political scientist, agreed, saying that the issue of nationalism might cause some temporary social problems if Slovakia were admitted to the EU and forced to give up a certain amount of sovereignty. "The fear of losing national identity would create nationalistic moods, which might lead to some phobias [against other nations]," he said.

According to the EC's Rochel, new member countries may accede to the EU when they have fulfilled the organisation's political and economic criteria. Countries must also bring their legal systems into line with the acquis communitaire - the system of legislative norms valid in all EU member countries.

Rochel said that this legal approximation process requires a long time, but added that he would consider "ten to fifteen years as excessive."

Slovakia has its place in the competitive European market, Figeľ continued, adding that it's the country's only alternative.

The most problematic part of the approximation process would be, according to Figeľ, the new legislative system which Slovakia would have to approve, especially in the areas of state support in social and commercial spheres and in handing over more power to local municipal governments.

The difficulty would lie, he said, not in approving the EU legislation, but in applying the principles of the legislation to everyday life, so that people will no longer have to fight for their rights, and the state bureaucracy would be committed to following the laws.

Kusý warned that despite the fact that the new government was showing much higher political culture than to its predecessor, the wide spectrum of political interests inside the coalition government did not yet prove its stability.

"It's a very tender unity and the EU will wait to see to what extent the coalition partners will go to achieving compromises," he said.

Kusý explained that one of the most significant reasons why Slovakia has so far been viewed rather moderately by the Union is the fact that the country does not have an elected president.

The Slovak Parliament failed to elect a successor to the former President Michal Kováč after his term in office ended in March 1998 and Prime Minister Mečiar overtook some of his powers. In May this year, however, Slovakia will have its president elected in a direct vote due to a constitutional amendment passed by the new government in January 1999.