Michal Kováč is back for another shot at the Slovak presidency. Having served five years as one of the fiercest opponents of Prime Minister Vladimír Mečiar, Kováč has declared his desire to run for President in the first direct elections ever to be held for the post.
Kováč earned international respect for his standing up to Mečiar during a stormy five year term in office. The object of repeated personal and political attacks from the Mečiar cabinet, Kováč also endured the mysterious drugging, beating and kidnapping of his son in 1995. Every year, however, he returned to parliament to deliver an annual address that criticised Mečiar and his allies for failing to respect democratic norms. Every year, cabinet members boycotted his speech. 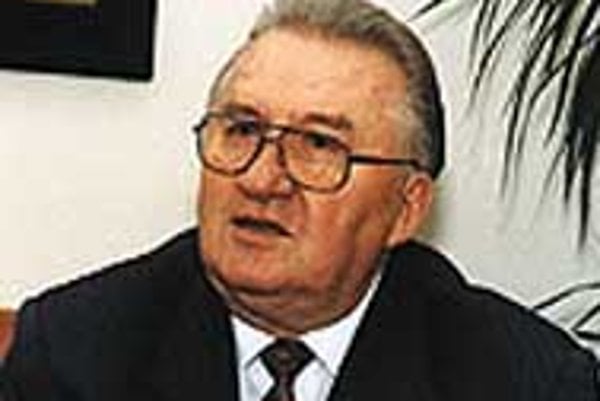 Font size:A-|A+  Comments disabled
Michal Kováč is back for another shot at the Slovak presidency. Having served five years as one of the fiercest opponents of Prime Minister Vladimír Mečiar, Kováč has declared his desire to run for President in the first direct elections ever to be held for the post.

Kováč earned international respect for his standing up to Mečiar during a stormy five year term in office. The object of repeated personal and political attacks from the Mečiar cabinet, Kováč also endured the mysterious drugging, beating and kidnapping of his son in 1995. Every year, however, he returned to parliament to deliver an annual address that criticised Mečiar and his allies for failing to respect democratic norms. Every year, cabinet members boycotted his speech.

Kováč's first term in office ended on March 2, 1998. Since then, his powers have devolved to the sitting Prime Minister and Speaker of Parliament - currently Mikuláš Dzurinda and Jozef Migaš, respectively. Repeated attempts to elect a new president in parliament during 1998 were fruitless, leading the Dzurinda government, swept to office in September elections, to pass a law allowing citizens to elect their President in a direct vote.

Several candidates have already promised to run in the ballot, likely to be held at the end of April. Košice Mayor and ruling coalition politician Rudolf Schuster has emerged as the preferred government candidate, and early polls give him nearly 50% electoral support. Kováč is likely to be one of Schuster's strongest opponents; The Slovak Spectator sat down with the former President to ask him what to expect from the upcoming elections.

The Slovak Spectator (TSS): Rudolf Schuster, the leader of the Party of Civic Understanding [SOP], has secured the support of all ruling coaltion parties for his presidential candidacy. How independent can we expect our new President to be if he is nominated and supported by the government? And do you think that people can really make a free choice when they are advised to support a particular candidate by politicians?

Michal Kováč (MK):That is a good question. There is a part of the electorate which is not able to decide on its own whom to elect, and these people may tend to be influenced by political parties. It could be said that a candidate nominated by a political party would have an advantage over an independent candidate. Mr. Rudolf Schuster, who is the candidate of all the parties of ruling coalition, will be in a better starting position than other candidates. I believe, however, that a majority of voters will elect their President in accordance with their consciences, their knowledge of and faith in the candidate, and not according to political commands.

TSS: What made you decide to run for the presidential post for the second time?

MK: I think it's normal in democratic countries that the President has the chance to serve in the post for at least two terms. This tradition is reasonable for several reasons. First, the experiences the President gains during his first term in office are of great value, and can be effectively used only if the person remains in the post and applies them for the benefit of the country. A re-elected President can use his experiences not only in foreign policy, and his contacts with foreign state officials, but also in domestic affairs where the President serves as a unifying force in state structures, or has a calming effect on social conflicts... A re-elected president has built up moral capital which can be used for the profit of society as a whole. People should realize that a president who is allowed to continue in his work is much cheaper and more economical for the country's budget.

TSS: Was it your own decision to run for the presidency, or were you simply answering a public demand that you return?

MK: In my case, the Civic Association for the Re-election of Michal Kováč to the Presidency was created. The Association stated the reasons for which it was proposing me as a presidential candidate. It will organize the necessary petition to gain 15,000 signatures to support my candidacy, and will also prepare my election campaign. So I'm not a self-nominated candidate building on my own ideas and emotions. There has been civic demand beyond the Association's official support. I got many letters in which citizens thanked me for what I did for democracy in Slovakia, as well as for the country's reputation abroad in my latest term in office. These people asked me to run in the presidential elections and to try to get re-elected. So it's not just my personal fancy.

TSS: Foreign Minister Eduard Kukan said on January 23 during his official visit to Washington, D. C. that the democratic revolution which began in Slovakia in 1989 ended only with last September's elections. Do you agree with his statement?

MK: Such statements are always partly true, but they do not draw a complete picture. I think we now again have a chance to fulfill the demands we made in 1989. After 1989, we were eager to make the political and economical changes necessary to get us into Europe, and we also wished to eliminate violence in our society, but we have not yet fulfilled either of these demands. However, we did create space for our state powers, including the courts and the police, to work on these aims and attempt to achieve them.

TSS: You will be 69 this year, and your political career is connected with the period immediately after the communist regime - with Vladimír Mečiar and with the federal government of former Czechoslovakia. Don't you think Slovakia now needs younger people in top politics, people who do not have a political record which is so connected with our often unhappy recent past?

MK: I don't think so. If I did, I wouldn't run for the presidency. And after all, why don't we leave it up to the citizens to decide? There are presidents around Europe who are even older than me. For instance. [Hungarian] President Arpad Gonz has been re-elected several times, or [Italian President] Luigi Scalfaro, who is even older. Citizens don't ask whether candidates should be younger. Younger candidates have the same chances to run for election.

TSS: Do you feel that you have any unfinished business left as President?

MK: Well, that's another personal and subjective reason why I decided to run for President. Many things were left unfinished, because the [Mečiar] government did not do what it stated in its programme, and made many mistakes in legislative procedure. I then used my powers to return laws to the government for further discussion. If I found laws contravening the constitution, I submitted them to the Constitutional Court. So, instead of constructive cooperation, we wasted time and energy repairing what others spoiled on purpose. In a normal situation, however, much more could have been done in a five-year term in office.

TSS: It has been said that the first ever direct presidential elections in Slovakia form the basis of a new political tradition. What are the basic attributes of this tradition?

MK: Instead of a new tradition, I'd say that the intent is to change the relationship of the President to the government and to the parliament. These relationships were rather deformed by the former government, which declared a war on the President and tried to dismiss him from office.

We also don't want the President to be manipulated by specific political powers. I believe it is better to have a president who is independent from the political parties in the country, whose legitimacy is instead conferred by all citizens. Such a President can serve as an integrating element on the political and social scenes. He would be able to act independently without worrying that he isn't fulfilling an agreement with the political party which nominated him or elected him to the post. A directly elected President would not have to bow to anyone else's political interests, and could therefore remain independent and non-partisan.

TSS: You were voted into office in 1993 on the strength of support from Mečiar's HZDS party. Did you ever avoid criticising the government for fear that the ruling coalition could put together enough votes in parliament to dismiss you from office?

MK: Of course, there were situations when I asked myself why I should pour oil on the fire. On the most important issues, however, I was very critical. My first criticism came in March 1993 and concerned the state of society and the policy of the government. Although I knew my position could be endangered, at the same time I thought democracy was under attack, so I naturally tried to find courage to face the danger of dismissal. But in other cases when I could not prove that the government's solutions to certain problems were illegal or unconstitutional, I decided not to intervene despite the fact that I had a different vision.

TSS: Will the new President have enough power to influence the political development of the country in a decisive way?

MK: One of the new competencies empowers the President to dissolve parliament, which strengthens his position. I expect that the current government will respect the President's opinions and remarks more than their predecessors did, so the relationship between the government and the President should improve in terms of mutual respect and cooperation. However, I think that the President's influence is largely determined by his personality, his skills and abilities. If he is a strong personality with experience and know-how, he will have great influence on the political situation and its development.

TSS: Do you think that Vladimír Mečiar still has some role to play in Slovak politics?

MK: No, I don't think so. It would be best if he re-assessed his previous performance and decided to leave public life. He has to be aware that his deeds contravened the true needs and interests of this country, as well as of the fact that he himself isolated Slovakia from the democratic world, that he was the main barrier to the improvement of international faith in Slovakia's democratic development. The damages he caused are huge, whether he admits it or not, and they are so evident and undeniable that he shouldn't hesitate about announcing his departure.