A new pennant was added on May 19 to the several dozen national flags that stand at the top of Mount Everest - the standard of Slovakia's ruling political party, Vladimír Mečiar's Movement for a Democratic Slovakia (HZDS). 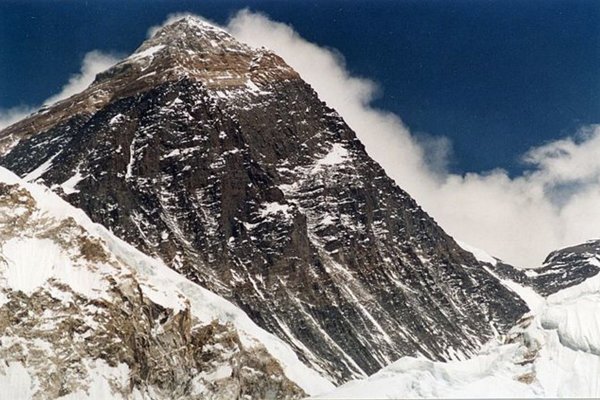 A new pennant was added on May 19 to the several dozen national flags that stand at the top of Mount Everest - the standard of Slovakia's ruling political party, Vladimír Mečiar's Movement for a Democratic Slovakia (HZDS). The unorthodox banner was raised by two Slovak climbers, Vladimír Zboja and Peter Hámor, who were part of a joint Slovak-Chinese expedition.

The victorious mountaineers had scarcely begun their descent before Slovakia's climbing community and political opposition erupted in protest. In planting the HZDS flag on Everest, critics said, the climbers had turned a sporting exhibition into a political statement. Mečiar, for his part, sent a letter of congratulation to the team in which he wrote that "my secret desires have been fulfilled to the last wish."

Vladimír Ondruš, head of the joint expedition, explained that "the HZDS flag was taken up as a symbol for the upcoming elections, that the leader of the [HZDS] movement will lead our country to the summit of prosperity."

"This is a disgrace that Slovak mountaineering will find very difficult to erase," responded Marián Šajnoha, President of Slovakia's IAMES mountaineering club in a public statement released on May 21. "As an individual and as Chairman of IAMES I declare that I distance myself from this act and condemn it as an attempt to drag mountaineering into politics." Ondruš, Šajnoha added, was the only member of the expedition who was not a member of IAMES.

But Mečiar told Slovaks on national radio on May 22 that the controversy was groundless, especially given the fact that the HZDS had indeed been responsible for leading Slovakia to sovereignty and a market economy. "Why shouldn't Slovak citizens freely display their political attitudes on Mount Everest?" he asked. "I identify myself with it, and I think it's a kind of symbol."

But for all that Mečiar viewed the climb as an "exceptional performance," many Slovak climbers rated the expedition as somewhat less than inspiring. "From the expert viewpoint, it ranks among Slovakia's weakest climbs," said Igor Koller, Slovakia's national climbing coach. "The guys chose the easiest route."

Koller said that such climbs are recorded but not recognized by international mountaineering groups, and added that almost 1,000 climbers have scaled Everest using the simple route.

Zoltán Demján, until May 19 the only living Slovak to have climbed Everest (in 1984 via the so-called Polish route, without the use of oxygen), said for the daily Šport newspaper that Hámor and Zboja's reliance on oxygen to reach the summit "is a pity...these days, if someone is unable to climb mountains without the support of oxygen, he has no business being there."

As if to prove Demján's point, Slovak climber Vladimír Plulík reached the summit of Everest without oxygen only four and a half hours after the official Slovak-Chinese group. Teaming up with a group of Czech and Japanese mountaineers, Plulík became one of the only 60 climbers to have scaled the world's highest peak without the assistance of extra oxygen.

Slovakia now boasts four living climbers who have stood on the top of Everest. In 1984, Demján and Jozef Psotka reached the summit, only for Psotka to die during the descent. In 1988, another four Slovaks reached the roof of the world via the extremely difficult and respected Bonnington route, but died mysteriously on an easy traverse during their descent.